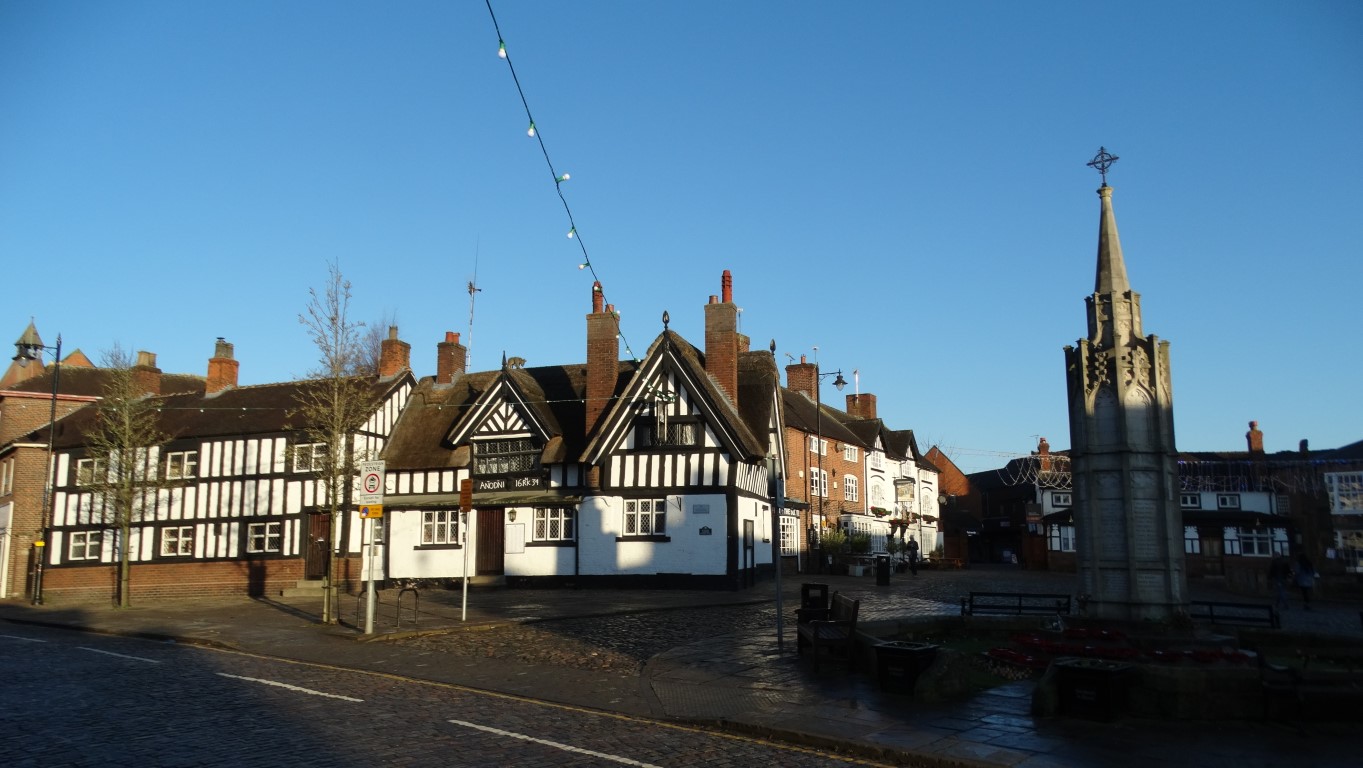 (all photographs were taken on the reconnoitre)

The Market Square was the starting point for this eight mile walk from the historic and fascinating town of Sandbach. Being such a miserable and foggy day the minutes ticked away towards 10am, so I was expecting a nil turn out. But almost on the stroke of ten, three EC ramblers emerged from the morning gloom. We started off with a brief historical tour of this interesting town centre starting with the Saxon Crosses. The two crosses are believed to date from the 9th century and are said to be among the finest Saxon crosses in the country. The carvings depict scenes from the Bible. The crosses were destroyed and broken up during Puritan times and the stone ended up in different parts of Cheshire but were brought together and re-erected in 1816.

Many buildings around the Market Square are grade 2 listed and most striking is the “Ye Olde Black Beare Inn” which was formerly owned by Lord Crewe, and is a timbered black and white building and the only building still to boast a thatched roof in the town. The date of its construction over the door is 1634 AD. It is conjectured that Dick Turpin stayed here on more than one occasion, and it was certainly here that bear-baiting took place.
We next made a short diversion to the Town Hall which is a fine steep-roofed building with a bell tower. Over the main entrance are two statues: one is of Bigot, the first Norman to hold the Manor of Sandbach and nephew of William the Conqueror, and the other is of Sir Randolph Crewe who was ancestor of the Right Honourable Hungerford, Lord Crewe, whose coat of arms also appears over the door.

Returning back along the High Street we passed the George Hotel, one of Sandbach’s original coaching inns. It is certainly over 300 years old and was the calling point for stage coaches plying the route between London and Manchester.
One of the most fascinating buildings in Sandbach is the Old Hall, which is now a hotel and was built in 1656 and is Grade 1 listed. The oak for the timber frame is thought to have come from the Saxe-mondron forest near Nantwich. Inside are some original fireplaces and oak panelling and there also a priest hole.
Crossing over the road we paused to visit St Mary’s Church. There has been a church on the site since around 1200AD and the original building was probably timber framed. Various restorations and changes have been made over the centuries but a major restoration took place between 1847 and 1849 under the direction of Sir George Gilbert Scott. We took a quick look inside to admire the nave and side aisles which have roofs of Cheshire oak richly carved in 1661. Just outside there are several fragments of the Ancient Crosses are under the archway of the tower, these only being found after the crosses were re-erected in 1816. Just behind the church our last building to look at was the Lower Chequer Public House which is claimed to be the oldest building in Sandbach, and dates from 1570.

Leaving Sandbach centre we paused briefly alongside Scotch Common Car Park. It was here that in 1579, Sir John Radclyffe of Ordsall secured the right to hold fairs and markets in Sandbach from Queen Elizabeth I. The Royal Charter also allowed for a fair to be held on the last weekend in September but on the 3rd September 1651, during the Civil War, a skirmish occurred on the town’s Common whilst the September fair was in full swing. Nearly 1000 Scottish troops were retreating from the Battle of Worcester where they had served under David Leslie. They paused to rest but were set upon by locals and market stallholders, who killed or took the soldiers prisoner. The Common is known locally as the “Scotch Common”.

It was now time to get walking and we left the town through Sandbach Park and on through new housing to gain the countryside. At Kingfisher Pool we stopped for a short morning break and beyond we continued on field paths which were now becoming almost impassable due to copious amounts of mud and water logging. We pressed on via farm tracks and minor lanes but the path after crossing Wood Lane was really a nightmare to cross and was so churned up with mud and water filled ruts. After sliding about we did reach Elworth without incident and crossed the A533. We next followed Mill Lane for a short distance before crossing a broken stile (since reported to the council). At least the towpath of the Trent and Mersey Canal provided some good firm walking and we pressed on via Hall Lane and Moston Road then taking an estate path through to join the Wheelock Rail Trail. Along this trail we found a good picnic site in the grounds of Sandbach United FC which was just off the path. We stayed with the trail a little further afterwards then took another muddy path along the valley to reach the former Sandbach Corn Mill. A series of paths between houses and residential roads were followed back into the town. An interesting walk with plenty of history but marred somewhat by some extremely muddy field paths.