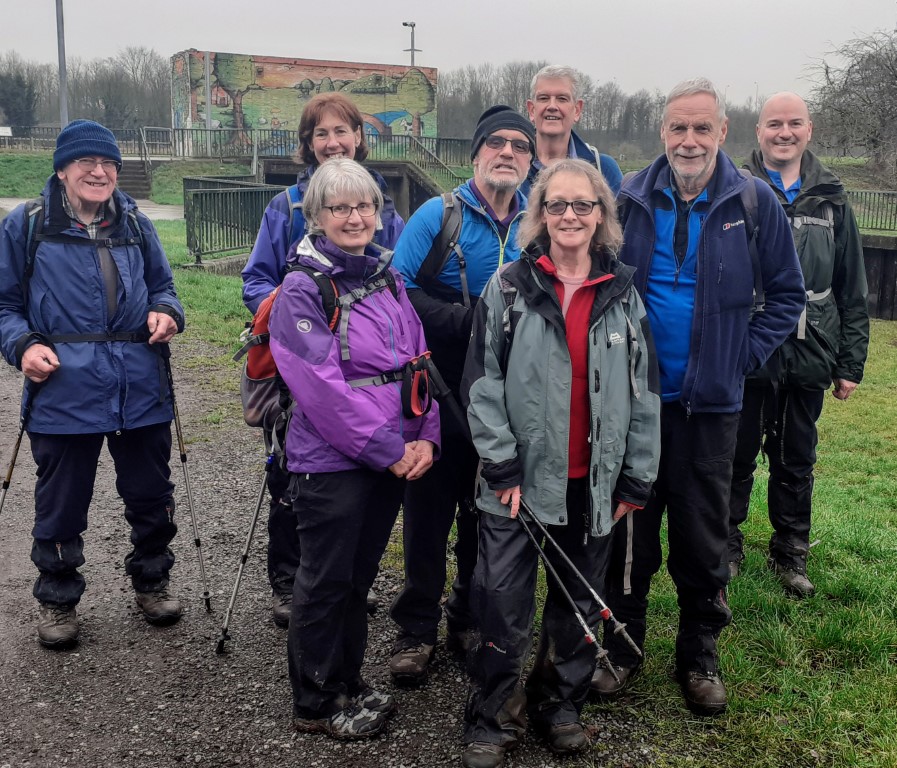 The flood gate structure has been artistically decorated by local school children at Fletcher Moss.

Nine East Cheshire ramblers parked near the Golden Days Garden centre in Cheadle and set off along the bank of the River Mersey and up to the Didsbury tram stop. A new experience for some on the tram brought us to Sale Water Park. After coffee at the Tree Tops we set off to explore the Mersey floodplain.
One of the most interesting features of the walk was the variety of uses of the floodplain. The first half of the walk was varied with paths alongside lakes, the Mersey and through nature reserves, visiting both Sale and Chorlton Water Parks. These former gravel pits are now excellent recreation areas, one with water sports and the both with fishing. Sale Water Park was created in the 1970’s when gravel was needed for the M60 embankments. Another extensive use of the land is for golf and we saw parts of five courses although only walked across Withington.
The water parks and golf courses are all part of a food alleviation scheme. If water rises dangerously, weirs or flood gates can be opened with water stored until the floodwaters have passed. A large scheme was seen near Fletcher Moss, Didsbury where the flood gate structure has been artistically decorated by local school children. Fletcher Moss is an interesting garden and wild life area created by Robert Williamson whose wife was instrumental in the formation of the RSPB. It was given to the city by Cllr. Fletcher Moss who bought the property and garden from Williamson.
There was then only a short section of river bank before reaching the road and the garden centre after 9.5miles of flat and not too muddy walking.