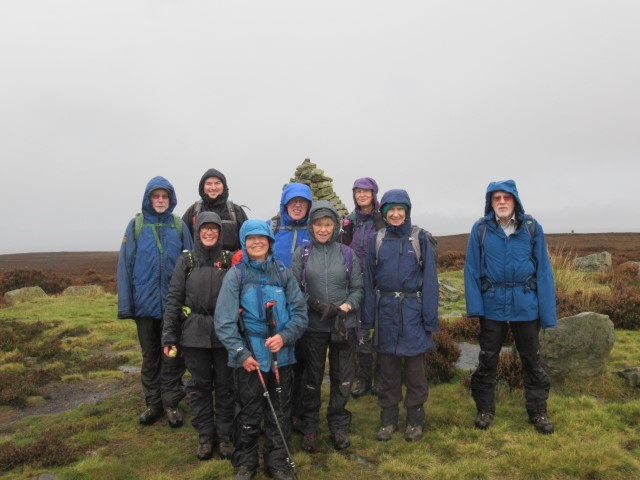 The ‘Long walkers’ at Simon Howe.

Nearly 40 members of the group participated in this weekend on the southern edge of the North York Moors. Staying in various locations but centred on the Forest and Vale Hotel in Pickering, there were group meals as well as three different walks each day. It was agreed that the hotel provided excellent service and food and for those staying there were a goodly number of radiators for drying clothing. The weather of early October meant the area had had 136% of its October rainfall already and mud was the order of the day.
The Saturday walks were all linear in the Pickering area. The short walkers enjoyed a steam train ride to Levisham Station which brought back childhood memories of steam travel to many of us. The group then ascended out of Newtondale, a splendid glacial overflow channel, up to Levisham village with its wide verges and stone farms in a linear format. The Three Horseshoes pub had opened early so coffee could be bought or the break could be enjoyed outside in the benches. The walk then continued via Levisham old ruined church to cross the railway three times as well as Pickering Beck to arrive back in Pickering via a mixture of woods, field paths and tracks. The medium walkers caught a bus to the Hole of Horcum which is a magnificent semi-circular hollow formed by spring sapping at the end of the ice age. They traversed this feature to arrive in Levisham to eat lunch with the possibility of a drink at the pub, and then followed the short walkers on a similar route into Pickering. The weather was reasonably kind to these groups with only one prolonged shower around midday. The long walkers used car sharing to reach Goathland and walked back to Levisham. Their walk was a varied trek with views of the Fylingdales early warning station and glimpses and sounds of the railway. Refreshments were enjoyed at Levisham Station at the end but the weather however was not so kind with further heavy rain in the later afternoon.
Sunday saw the short and medium walkers start from Sinnington, another delightful village with extensive green areas and a fast flowing river. The short walkers left the village passing an interesting old barn and proceeded to Cropton for a coffee break under a conveniently large horse chestnut tree as it was raining. The group then descended into the Seven valley and up to the village of Appleton-le-Moor where the church said ‘church open’. Here we found a wonderful shelter from the rain for lunch amidst harvest festival decorations and tea and coffee on offer on a ‘help yourself’ basis. The nearby pub offered toilets in return for a donation to the air ambulance, so a very welcoming village. Our return to Sinnington even had a little sunshine. The medium walk headed up the valley to Lastingham where the church service had ended and we could visit the crypt church. The church is Norman with alterations but the crypt church has not changed since 1078 and is said to the oldest Norman crypt in the world. After eating our picnic in the sunshine the rain returned as we headed to Appleton with its splendid Victorian church and school buildings before continuing heading back to Sinnington where we enjoyed a pot of tea in the Fox and Hounds pub using their residents lounge. The long walkers started from the village of Hutton le Hole heading over the moors to Rosedale Chimney and Rosedale and returning along the valley. Overall, some lovely walks but rather too much rain and mud.
Due to the newspaper proforma restrictions, a shorter version of this write up will appear in the Macclesfield Express on Wednesday 6th Novermber.

Ten walkers started out from Pickering in cars, and managed the logistics preparation by leaving a car at the walk’s end, at Levisham, and drove to Goathland to start the walk.

Under light clouds, we ascended southwards onto Two Howes Rigg, passing Simon Howe Cross (at 260metres), following Simon Howe Rigg down to Blawarth Beck. This open country overlooked distant moorland and forested horizons and to RAF Fylingdales.  We climbed over forested Wardle Rigg and followed a pleasant path down through a wood, in a heavy shower, to the North York Moors Railway station at Newtondale Halt. After a rather slippery walk beside Pickering Beck below the raised rail track, we turned south to ascend steep wooden steps in bracken in a very picturesque water-cut clough between gritstone cliffs to reach Hudson’s Cross (in name only) and Yewtree Scar.  We could hear, but not see, steam trains occasionally, hooting in the narrow valley cut in the moor below and beyond the wooded escarpment we had climbed.

We crossed the scar and climbed in bracken to Gallows Dyke and emerged to a spectacular view at the head of Hole of Horcum at 270 metres. Here, a half-kilometre wide gouge in the high moorland is created by softer ground eroding and undermining the tougher moorland surface crust for two kilometres southwards. The widened valley then reverts downstream to a narrow V-shaped cleft typical in this moorland.

After picnic lunch in a light but cold northerly breeze we headed west across Levisham Moor to Dundale Rigg and turned northwest, to seek the ruinous stone shell of Skelton Tower on Levisham Bottoms – a moorland mid-height ‘shelf’.  We were welcomed there by a herd of Highland Aberdeen Angus cattle (wide sharp-pointed horns in evidence, borne by the meekest and mildest animals you could imagine).  We took photos of course with them framed in stone doorways and windows of the tower, and sipped hot drinks before heading south, down the steep valley side to seek out Levisham Station.  Descending to the track crossing point, we were rewarded by a spectacle of a noisy steam train, engine belching steam, as it accelerated from the station to climb the valley towards Goathland.

At Levisham Station and level crossing, several of our group ate ice-creams or cakes at the station shop. Our final two kilometres took us up a long, grassed incline path to fields and across to Levisham and the Horseshoe Inn. Most of the group relaxed with teas there whilst drivers were driven back to Goathland to collect cars. We were blessed with very little mud under foot for this walk, despite the recent days of heavy rains, and some showers during the day. Overall 12.6 Miles were covered with 1690 ft ascent.

On day two of the Pickering weekend a group of 16 assembled at Hutton-le-Hole car park for a day’s walking across Spaunton Moor towards Rosedale. The weather was supposed to be mostly fine with some rain in the afternoon, though there was some light mist as we set off. The route took us along part of the North York Moors Inn way towards Lastingham along first a wooded trail and then skirting the edge of Spaunton Moor to near Lastingham. Heavy rain over the previous week made what had been just a hop over Hole Beck a tricky crossing over a swollen stream. It was to be the first of several such crossings. Climbing up from the beck we reached the main path from Lastingham and a crossing of tracks.

We then turned north following a well-defined stone and gravel track along Lastingham Ridge to Ana Cross. Looking ahead we could see a huge rainbow in the sky with the left end little more than a few hundred yards away. Further along the track we could see the right end of the rainbow again a few hundred yards away. By now the rain was starting to get heavier, necessitating full waterproofs when we stopped for our morning break at Ana Cross.

Resuming our walk we followed the track to the top of chimney bank, a steep 1 in 3 road up from Rosedale Abbey known by cyclists as the chain-breaker.

Rosedale Abbey (which doesn’t have an abbey) is a former industrial area where ironstone was quarried at the end of the 19th and early 20th Century. A mineral railway had been built to carry the stone towards Teesside and it was the former track bed that we continued along, past Thorgill Head before  turning west across the moor to the Blakey Road.

This now took us to the return half of the walk, starting with a descent into the Dove River valley. The descent involved navigating a notional path across the heather to find a navigable gully to take us down from the open access area. At the bottom of the gully, there was a sheltered flat area, protected by the hillside from the biting wind and with the rain stopping for a brief interlude as we stopped for lunch. The spot afforded us a lovely view down the valley before the mist closed in again.

After lunch we continued downhill through a farm to Rawson Syke where a bridleway along the river valley would take us back towards Hutton. There was probably more water under foot than falling as rain, though the rain continued.  The bridleway took us for 2-3 miles along a tree-lined route to Lowna Bridge, before we followed the road for a mile or so back to the car park and our drive back to Pickering.

The short Sunday walk took us through the pretty village of Sinnington past the church and through a variety of deciduous woodland to the village of Cropton.  We sheltered under a stunning Horse Chestnut tree for our coffee stop and then set off south down Low Lane through the woods. We crossed the River Seven at Appleton Mill Farm.  After a stiff climb up the farm drive we arrived in Appleton-le-Moors.  This has to be one of the most welcoming villages in Yorkshire. The plan had been to use the benches outside the village hall for our lunch break, but the heavens opened as we arrived in the village.  We spotted a large sign outside Christ Church saying “Church Open” and ventured inside where we found a church beautifully decorated for the Harvest Festival and tables laid up with tea and coffee and a sign saying “Help Yourself”.  We had a welcome break inside the very pretty church.  As we left, we called into the Moors Inn to enquire if there were any public toilets in the village and they said we could use theirs for a contribution to the Air Ambulance fund! Happily the sun came out again as we walked across fields to Bishop Hagg Wood and then followed the river back to Sinnington. 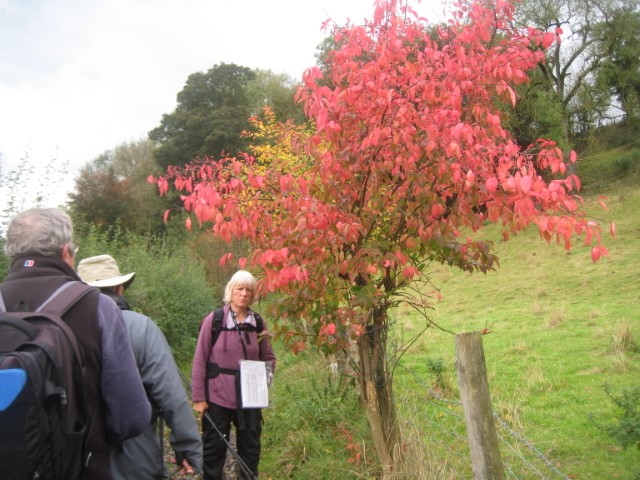 Autumn colours on the ‘Medium walk’.

If any of the photographs have the wrong caption or can be elaborated on please E-mail Colin Park and I will amend text.