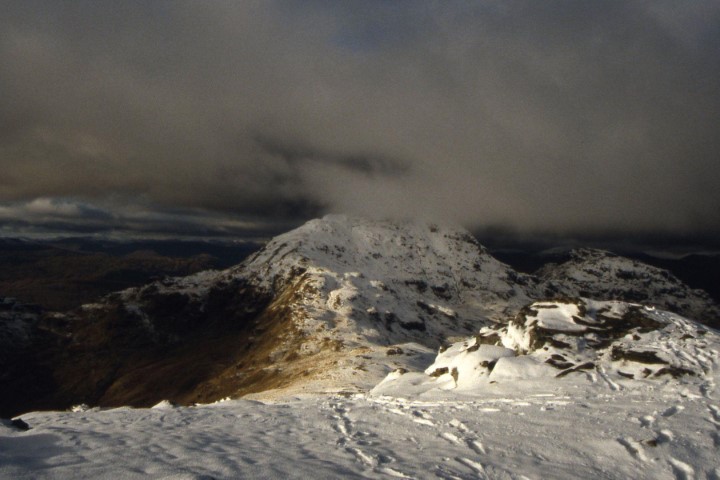 On the summit of Beinn Tulaichean with a view towards Cruach Ardrain.

On my many winter visits to Scotland over the years I have always stayed low and not really ventured onto the higher tops but sometimes the weather is so good that it is worth the extra effort to bag an easier Munro.
On this occasion Beinn Tulaichean (946 metres) which is located at the western end of the Braes of Balquidder seemed a feasible walk to undertake. Climbing a Munro in winter throws up another problem is that it gets dark early and for this walk I really left it a bit late to set out as this was an afternoon walk.
Time would play a major factor for this walk and furthermore, there was snow above 600 metres and I didn’t know what under foot conditions would be like. Beinn Tulaichean was the main objective but I was just hoping to bag the mightier Cruach Ardrain if time permitted. 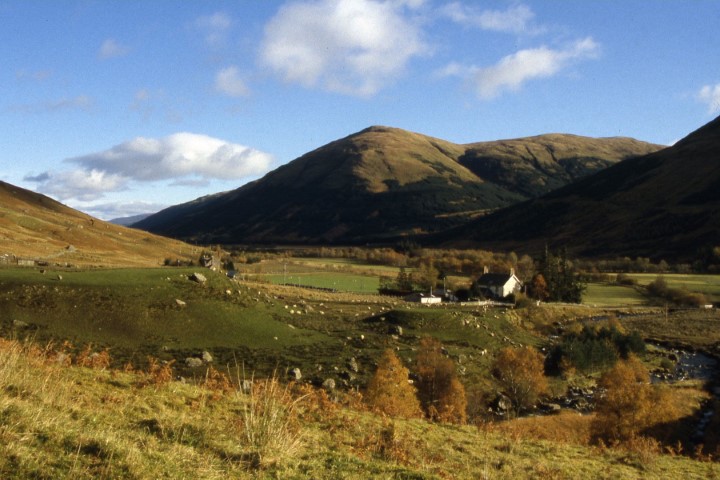 A winter afternoon at Inverlochlarig close to the start of my walk.

I left the car in the empty car park near to Inverlocharig. The notice board said that walkers were welcomed here which was pleasing. A half mile walk in fine afternoon sunshine led me to the few farm buildings at Inverlochlarig where I crossed gates and rounded muddy fields to gain the open moorland. A good track led up Inverlochlarig Glen but I soon left this and started to climb to the left up across rough ground. The going wasn’t exactly easy as the grass was long and there were, several crags to avoid. Slowly I gained height and the views began to open out. Now and again I picked up a sheep track only to lose it again. Time was indeed pressing and I didn’t want to find myself out at night time. At around 600 metres I encountered the first snow which didn’t present any problems but as I climbed it was getting deeper. The views were, excellent with the snow clad summits around me with low sunlight and dark clouds. As I reached the southern end of the ridge the snow was much deeper with drifts. 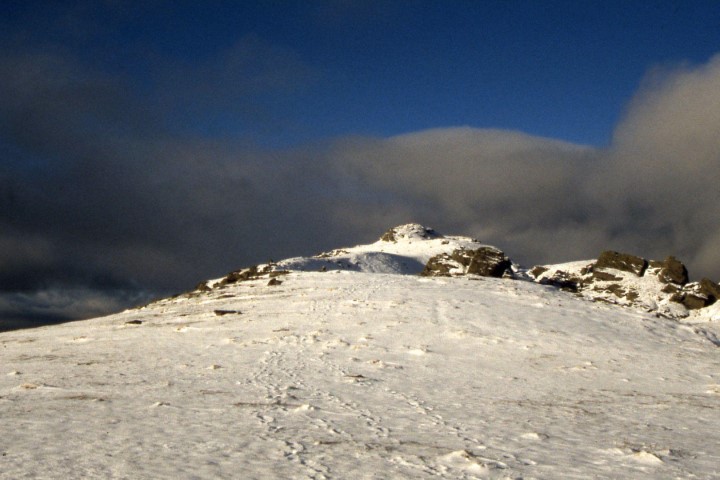 Nearing the summit of Beinn Tulaichean.

Ahead I could see the summit and I followed some footprints ahead. It was colder up here but the views were unbelievable and I took several photographs. I finally reached the 946 metre summit and paused awhile. After taking more photographs I decided that with time pressing on and Cruach Ardrain being up in the clouds I would leave that peak for another day. 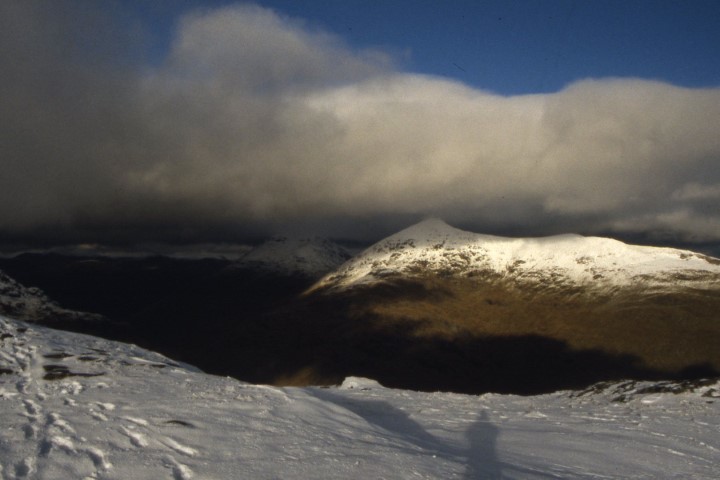 Sunlight on Stob Binnein from the summit of Beinn Tulaichean. 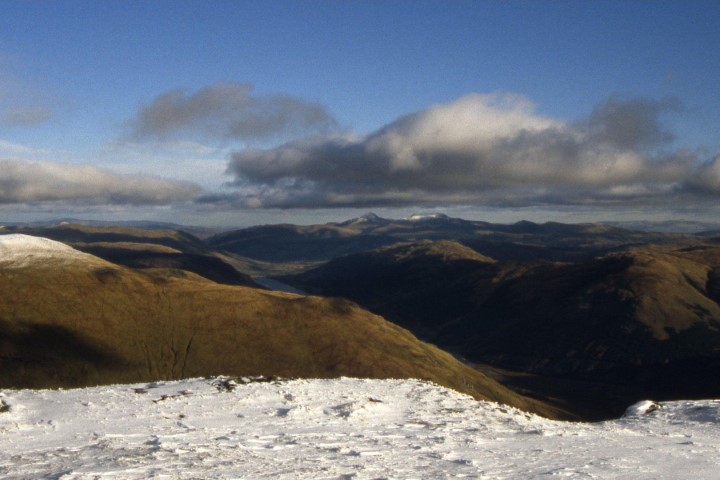 The view towards Ben Vorlich from the summit of Beinn Tulaichean. 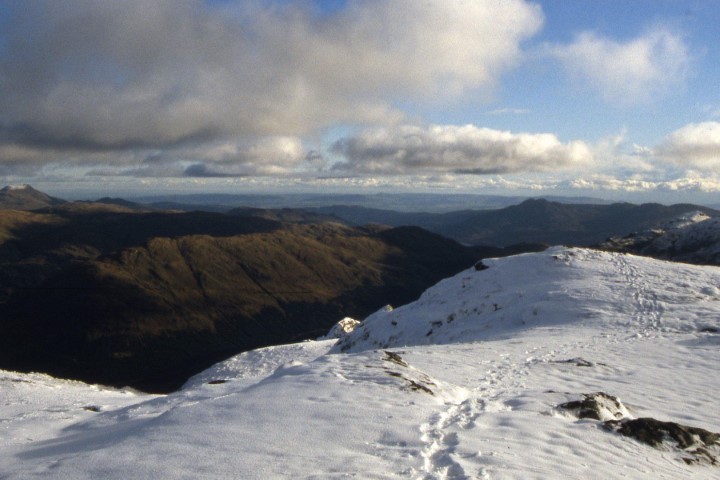 Footprints in the snow on Beinn Tulaichean.

The decision now I had to make was to return the same way or to press on to the col to the north of me then down the eastern flank of the mountain. I chose the latter. The snow was partially frozen at the surface and crampons might have been useful. For one thing, my walking pole was coming in handy as I descended the easy slope to the col. I was concerned about the rocky eastern side of the mountain as I didn’t want to slide over one of the many crags. As I descended the steepening slope I used my walking pole to steady me and it came in very useful. The snow was softer here and I was able to make steady progress and chose an easy way down. The snow seemed to go a long way down the eastern slope but soon I was on barren hill side making my way down over tussocky grass to a lonely empty valley. From the col to the track took just a half hour. The valley was in deep shadow as the sunshine lit up the hill side high above on my left. It was a good track back towards Inverlochlarig and I was pleased with myself that I had bagged another Munro. As I neared Inverlochlarig I was back in sunshine briefly as it shone down the valley from the west. At Inverlochlarig I returned along the drive back to the car to complete a very satisfying walk.

Heading back along the lonely Inverlochlarig Glen at the end of the day.