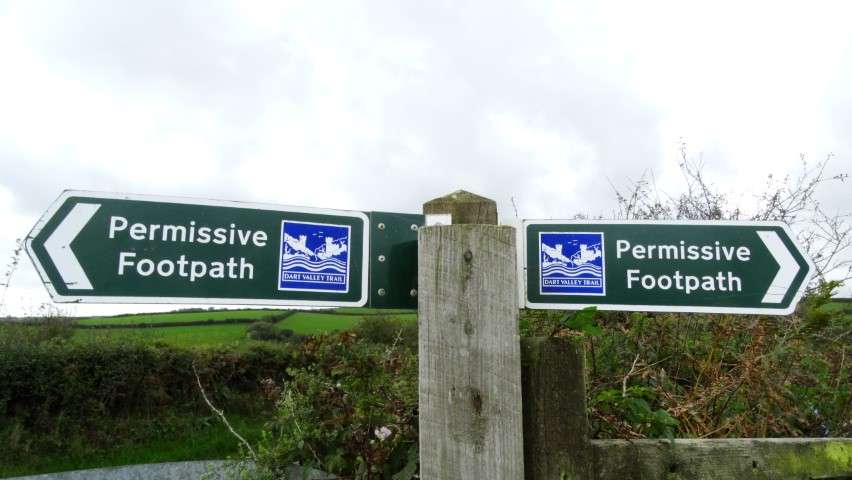 One of many good direction signs along the Dart Valley Trail.

Having just completed a walk of 54 miles in three strenuous days along the South Devon coast between Kingswear and Exeter which included more ascents and descents than I can remember it was time to turn my sights inland with a walk along the Dart Valley Trail between Dartmouth and Totnes. 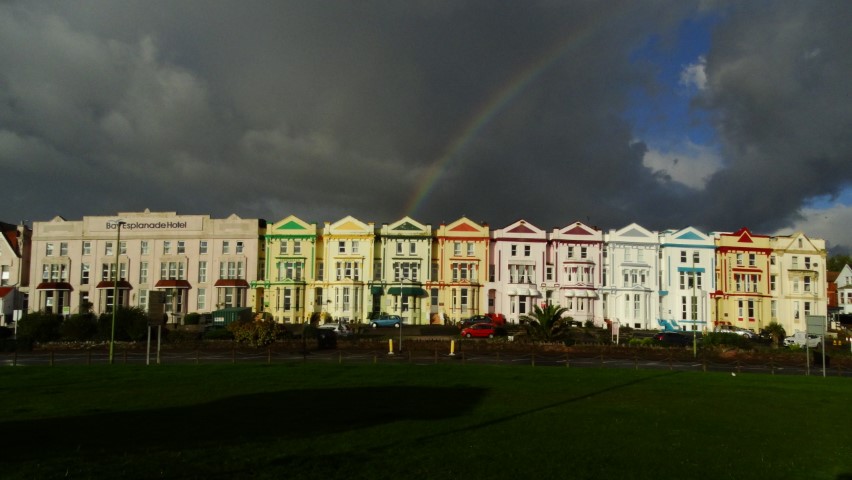 Walking to Paignton Bus Station with the threat of a bit of moisture to come.

It’s mid October and the weather forecast for the day isn’t good and indicates a plethora of heavy showers especially in Southwest England. I don’t need to get away early as it is just a short drive into Paignton where I park not far from the Paignton Bus Station. Already there are showers around with a vivid rainbow to the west. From the car it is just a ten minute march to Paignton Bus Station and I just make it before the heavens open for a few minutes. The bus number 120 is on time and I take a seat upstairs at the front for the scenic ride down to Kingswear where it is just a short walk to catch the Lower Ferry over to Dartmouth by which time it had turned fine and sunny. 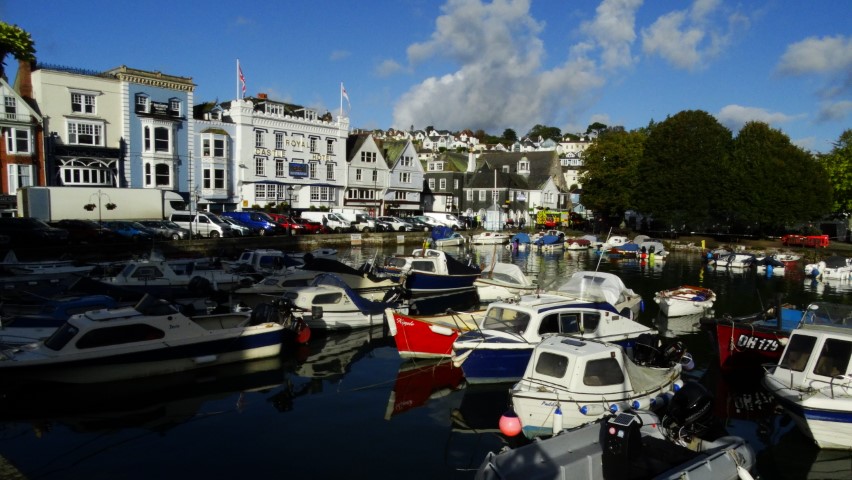 Dartmouth on a fine sunny morning at the start of my walk.

Today my intention is to follow the Dart Valley Trail to Totnes, a distance of around thirteen miles along an undulating route. To start with, it is a delightful walk through Dartmouth in the bright morning sunshine. It’s already 10.30am so I take an early break on a seat overlooking the River Dart before setting off in search of the start of the Dart Valley Trail. With so many narrow lanes and alleyways to chose from I set off by heading too low and have to take a right turn steeply uphill to join my intended route. It is quite a stiff ascent up through the town passing St Clement’s Church as I reached the top. I cross over the A379 and my walk continues now via a long descent down Old Mill Lane back to sea level again but this narrow lane is surprisingly busy and I often have to press myself into the hedge to allow traffic to pass. The head of the well wooded Old Mill Creek is the site of a couple of well hidden boatyards. On the far side of the creek I follow a minor lane then track which soon runs through woodlands. Little streams are still in spate after the recent rains as I head east and I stop at one point to photograph Hermitage Castle on the southern and opposite bank of the creek. The castle was built really as a folly in the 19th century in what were once landscape gardens. I continue with a delightful permissive path ascending alongside field boundaries to reach Fire Beacon Hill where I briefly joined an exceptionally muddy lane if you can call it a lane. I soon turn right onto field path and the descent towards Dittisham is a delight to walk with lovely views over The River Farm to the River Dart beyond. 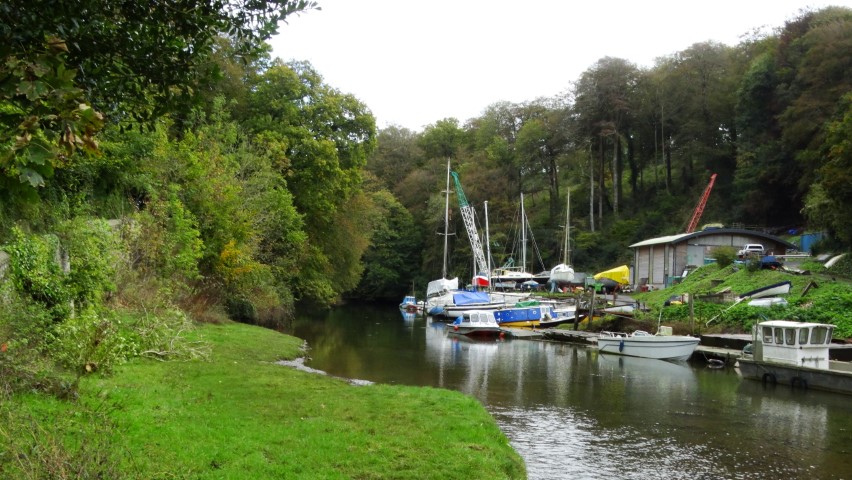 One of the hidden boatyards on Old Mill Creek. 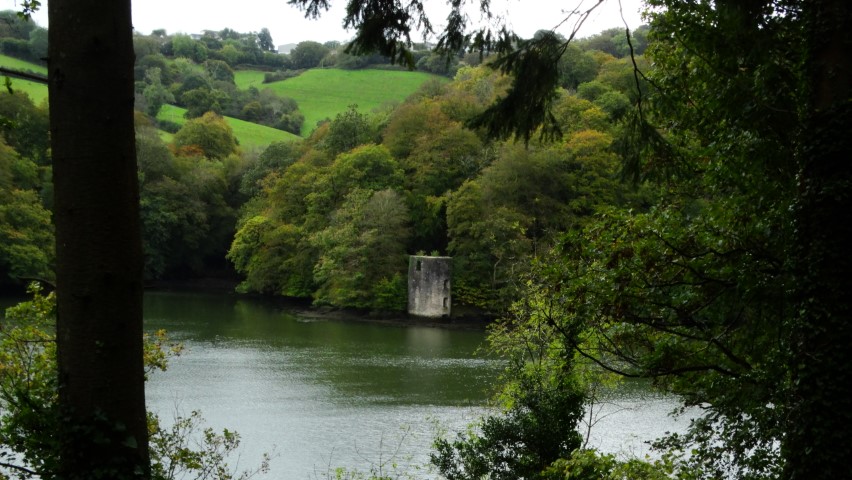 Hermitage Castle on Old Mill Creek and once a feature in extensive landscape gardens.

In Dittisham I follow the narrow road through the village passing many picturesque cottages and make for the churchyard for my lunch stop. It is a lovely spot in the bright autumn sunshine under deep blue skies, and for now, no signs of any showers. St George’s Church has a fine tower and there has been a church on the site since the 14th century but there have been many alterations over the centuries. I don’t venture inside as there is some building work going on. 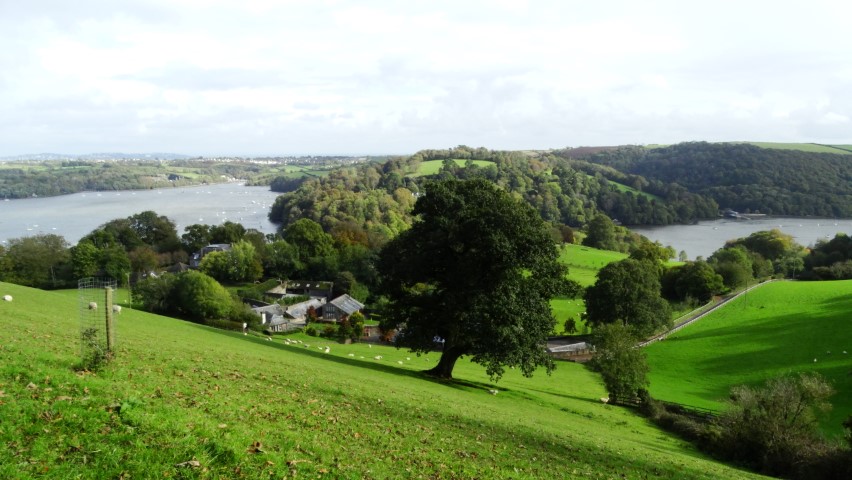 A most delightful walk on the descent into Dittisham with views to the River Dart. 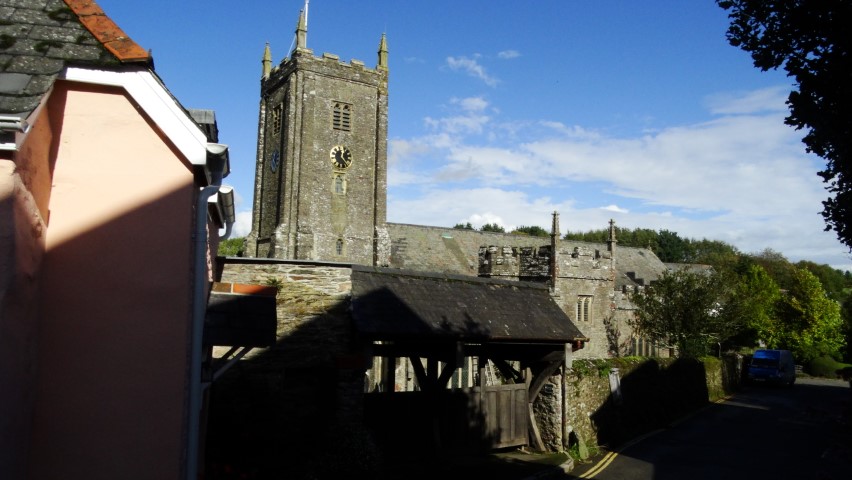 Time for a spot of lunch and I find a pleasant seat just inside the churchyard at Dittisham.

From the village I head west on the lane and later take a pleasant field path to the hamlet of East Cornworthy passing the attractive Brambletorre Mill en route. Narrow lanes are again followed to Barberry Farm and here I continue with a watery track crossing the swollen stream at the mossy and shady Poor Bridge. I now have a long ascent via an enclosed track which is almost a watercourse. Reaching Longland Cross I pause where I have a good view west towards Dartmoor where the weather isn’t looking quite so bright. From this spot, I have a good view towards Cornworthy Church with its fine tower. A lane is followed into the village and passing the fine St Peter’s Church en route which dates mostly from the 14th century. In the village I decide on a detour to visit the remains of the Priory Gatehouse. It was founded in the early thirteenth century, for Augustinian nuns, and existed until 1536 but was destroyed during the Dissolution of the Monasteries leaving only the gatehouse. My diversion is a waste of time as the ruin lies the other side of a thick and high hedge with no access or close up view whatsoever. I therefore return to the Dart Valley Trail and follow the path down through Charleycombe Wood. The woodland and an area beyond is owned by the Woodland Trust. I soon reach Tuckenhay on the muddy Bow Creek. The tide is out but the streams entering the creek are very much in spate. In the hamlet I join a lane and pass two riverside pubs. The stepping stones across the upper part of the creek is the right of way for the Dart Valley Trail but are well under water due to the swollen stream so I carry on with the lane and make the ascent to the attractive village of Ashprington. I head for the interesting church of St David’s with its slender and tall tower. The church dates from the 13th century and I opt to take a quick look inside. The font dates from Norman times and I am impressed by the richly decorated wooden pulpit. 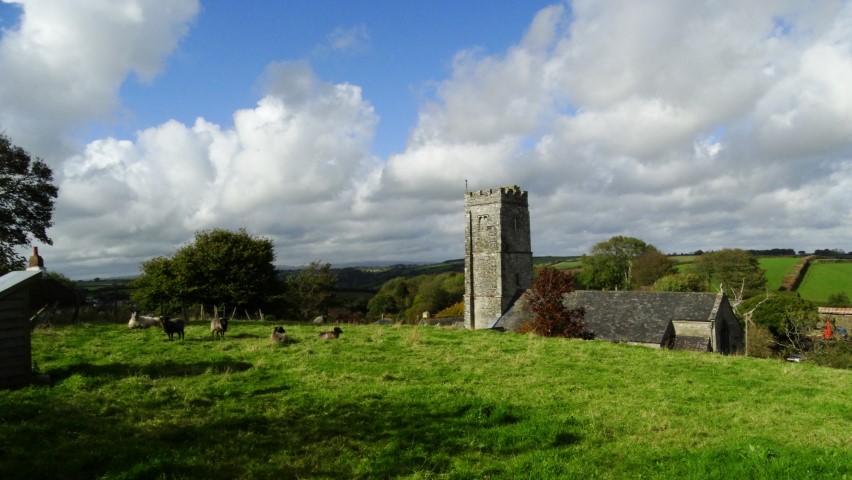 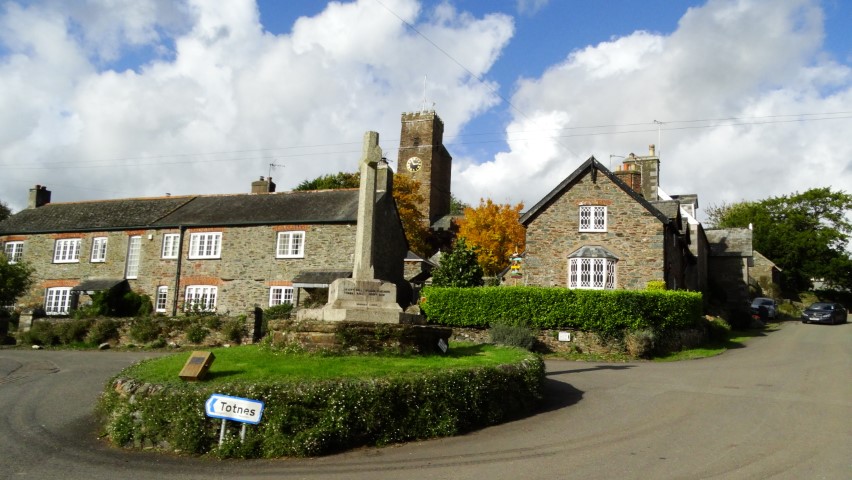 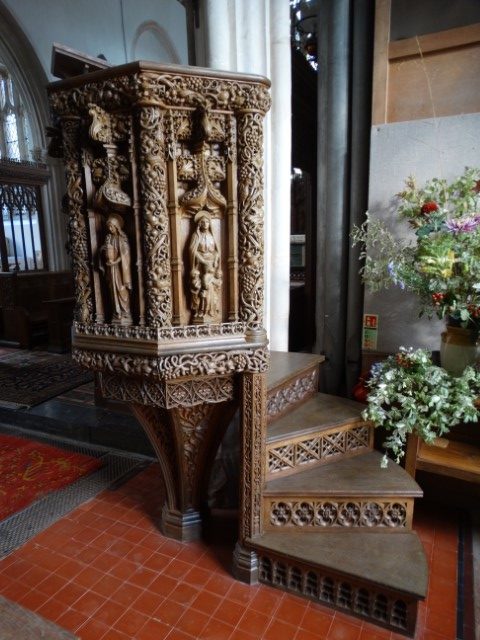 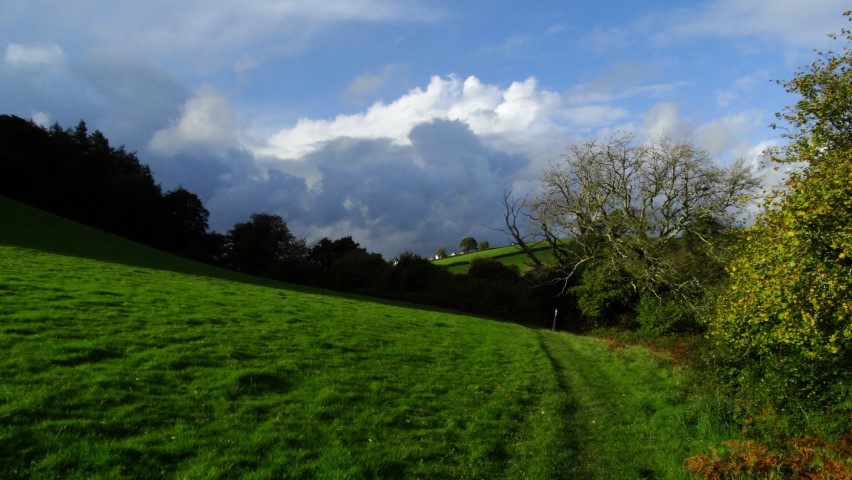 Shower clouds building up as I near Totnes towards the end of my walk.

My route north now lies through the Sharpham Estate which is now run as many ventures including a vineyard and meditation centre. The path cum cycleway towards Totnes is initially surfaced but the cycleway heads off later at a higher level and my path descends towards the marshlands of the upper end of the estuary. It is a pleasant walk along this peaceful section of the valley in the late afternoon sunshine but towering shower clouds are now not that far away. The town of Totnes is soon in view and I soon divert on a very new path to enter the town. My timing is fairly good for the return bus journey to Paignton and I don’t really have the time to explore the town. The bus is on time and I am glad that I am on it as the weather to the west has taken on an inky look with heavy rain not far away. The bad weather ‘chases’ us all the way to Paignton where I smartly head back to the car just making it before it turning quite wet for the next half hour but I am rewarded afterwards with a fine rainbow as viewed from the cafe in Morrisons.

Overall I was quite impressed by the Dart Valley Trail and signposting was excellent the whole way which can’t be said for the coast path where many wooden signs had rotted or were missing altogether.