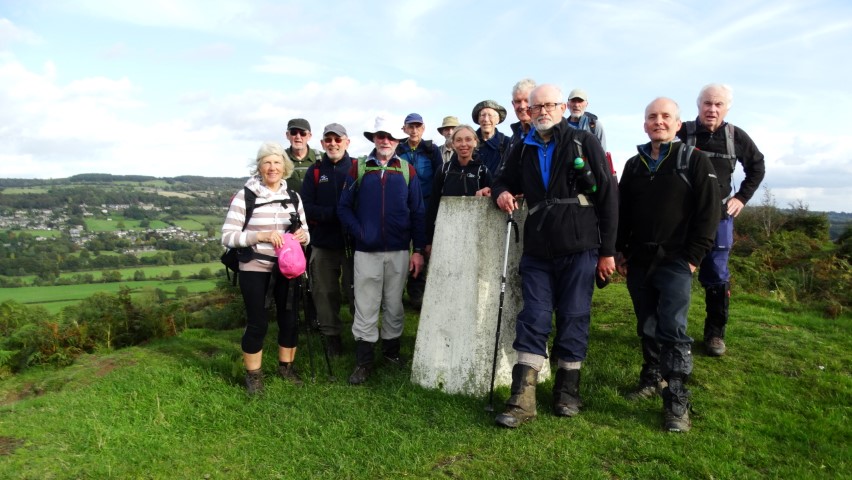 The group on Oaker Hill towards the end of the walk.

For once it was a fine day but showers were forecast although as it turned out we appeared to be in a favoured location and missed all but one shower. From the car park at Darley Dale fourteen of us set out at 10am towards Churchtown in the bright sunshine. After walking across some squelchy fields we were soon at St Helen’s Church. Here I pointed out some features of interest. The churchyard is dominated by the Darley Yew, a 2000 year old yew tree with a massive girth. The church porch contains some fine Saxon coffin lids and further out in the churchyard we diverted to visit the grave of Sir Joshua Whitworth, inventor of the Whitworth Screw and rifle. The Whitworth thread was the world’s first national screw thread standard, devised and specified by Joseph Whitworth in 1841. Until then, the only standardization was what little had been done by individual people and companies, with some companies’ in-house standards spreading a bit within their industries.
Our walk continued beside the preserved Peak Railway which now runs between Matlock and Rowsley Stations. This railway line was once the mainline between London and Manchester. A field walk next led across the busy A6 and up to Two Dales. The village was once known as Toad Hole but a squeamish rector of Darley in the late 19th century insisted that the name should be changed to Two Dales.
The village is dominated by the former flax mill buildings. In the late 18th century, Daniel Dakeyne harnessed the stream that runs through Sydnope Dale to power his new flax mill. Daniel’s sons, Edward and James Dakeyne, designed a machine called the ‘Equilinium’ to prepare the flax for spinning and they went on to develop a hydraulic disc engine designed to make better use of the high-pressure water available at the mill. Given its tendency to groan and roar, the device was christened the ‘Romping Lion’ by local people. The large former flax factory, known as Ladygrove Mill, now provides accommodation for various businesses.
The deep wooded valley of Sydnope Dale was next followed with a morning break part way up. We later doubled back on a higher path before ascending to reach a road and soon entering the wooded summit of Matlock Moor. The walk over the top was easy to follow and on the descent we stopped within the woodlands for lunch.
Soon after lunch we emerged onto a track which we followed to the A632 and we continued along this road towards Matlock before branching off along Wellington Street to view the Old Tram Depot which is now a garage. The tramway was built to the Hydro Spa Hotels, bringing customers from the railway station near the River Derwent. One of the tramway’s directors, Job Smith got the idea for a steep-gradient tram for Matlock while in San Francisco in 1862. The original plan for the tramway was to run between Matlock Railway station and the Hydro Spa Hotels of Smedley’s and Rockside. The risk of flooding forced the terminus to be set up on Crown Square. Tram services started on 28 March 1893. It was the steepest tramway in the world on public roads, featuring a 1 in 5½ gradient. The tramcars had no independent power but were pulled by a cable situated below and between the tracks. The depot was situated on Rutland Street and contained a boiler and a stationary steam engine which pulled the cable and lifted the trams 300 feet up Bank Road. Fares used to be ‘Tuppence up, Penny Down’. Bank Road was not wide enough for two tracks, so a single track was used, with a passing place where the trams met. The up and down cables had to run in the same tube between the rails. The trams averaged 5½ mph, and had the advantage of the down-tram balancing the up-tram, and saving power in the Depot steam engine. A spare tram was kept in the Depot. In the 1920’s the tramway started to lose money and by 1927 the council decided to replace the tramway with motor bus operation, and tramway services ended on 30 September 1927. The Council agreed in February 1928 to put the tramway up for sale.
Rather than follow the road down through Matlock, we took a series of enclosed cobbled paths and later emerged in Hall Leys Park. At the northern end is located the restored tram shelter which has been relocated from Crown Square.
A brief but sharp shower came and went and we were soon ascending the Limestone Way on a steady slope across fields and later this was followed by a long descent to the village of Snitterton. I was keen to fine Magpie Cottage which was the place where William Wordsworth stayed and wrote his sonnet to Will Shore’s Tree. Ironically as we reached the road, the cottage was on our right. The road was followed through the village before taking another field path. We were soon ascending again and this time Oaker hill was our objective. Near the summit we stopped for an afternoon break before walking along the summit ridge which is dominated by the large sycamore tree. This lone tree tells the tale of two local brothers, Will and Tom Shore, who each planted a Sycamore tree atop the hill. The brothers quarrelled and went their separate ways; Will who stayed, flourished and prospered, whilst Tom who left, fell into penury and perished, and appropriately his tree withered and died. Hence for almost two hundred years, there has been a single Sycamore tree standing proud and alone on the summit of Oaker Hill. After visiting the trig point which included a group photograph we descended steeply down the grassy slope before following the village road through Darley dale back to the cars.

A shorter version of this walk will appear in the Macclesfield Express.

The following photographs were taken on the reconnoitre. (December 2018)