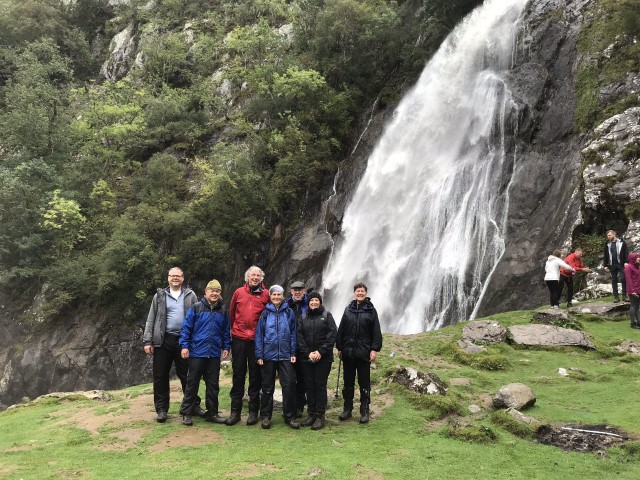 Thirty eight, East Cheshire Ramblers recently went on a coach trip to Snowdonia where three walks were offered. The short and medium walks started in the picturesque and historic town of Conwy and ventured up onto Conwy Mountain to reach the Sychnant Pass to the west of the town. The groups were rewarded with fine views out over the Great Orme’s Head and beyond. Meanwhile a more strenuous walk of 12.5 miles was undertaken and started further west from the village of Abergwyngregyn and led by Rob Stevenson. In his capable hands we were on a steep ascent within minutes powering up on the C’aer Mynydd grassy path towards our key land mark; the Aber Falls (Rhaeadr-fawr) which proudly gush at the foothill of the Carneddau range. With much recent heavy rain the falls were an awesome sight.
Views of the whole area gradually opened up to us the higher we climbed. Across Conwy Bay we could see Puffin Island which still has the remains of a 12th Century Monastery, hence the island was formerly known as Priestholm Hermitage established around the 6th Century. The Island is now privately owned by the Baron Hill estate. The island of Anglesey and the Menai Strait was also visible even as a rain soaked mist blew over.
We had our morning break at the Aber Falls which plunges thunderously down 120 feet or so over a ledge of rock into the Afon Rhaeadr-fawr. We descended near the stream on the North Wales Path towards the Bont-Newydd Car Park passing many ancient ‘incisor’ standing stones including the remains of the Iron Age Coed Aber Roundhouse, a reminder of  the wealth enjoying the magical splendour of nature in shading times gone by.
Our second ascent brought us to our lunch stop high above the trees in peace and tranquility. Descending then ascending once more amid the heather and gorse we could see below us the town of Penmaenmawr. Our drop down into the town was past hedge rows heavy with sweet blackberries and too tempting not to try a few. Dry and thoroughly walked, we reached this well kept town where our challenging walk ended. 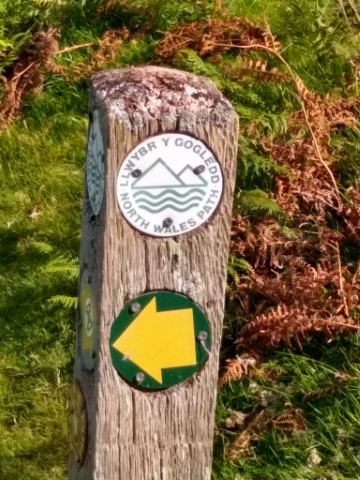 One of the many way-markers along the route.