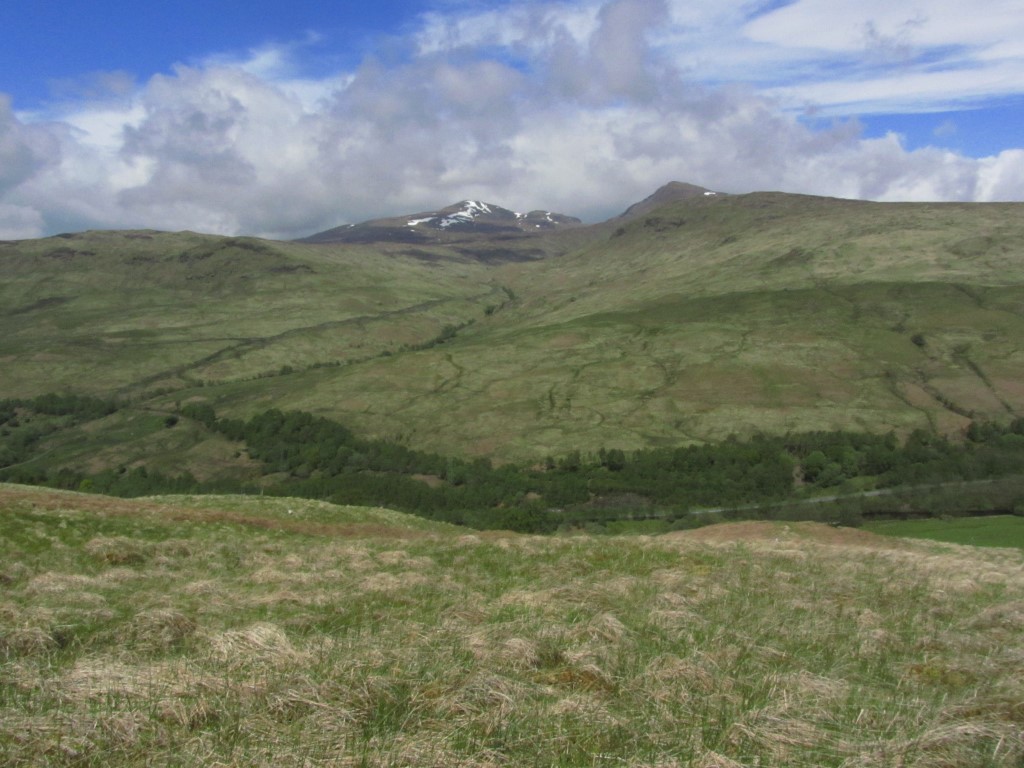 Ascending Stob Creag an Fhithich with the view towards Ben Oss and Beinn Dubhchaig.

It’s June 2015 and the weather has been quite appalling over recent days and I am setting off on a ten day trip to bag a few more Munro’s.

With an early start from Macclesfield, I head north to Scotland with very much an open mind with thoughts even of doing something low level today. From fleeting showers over Northern England and the Southern Uplands to heavier showers north of Glasgow prospects don’t seem too good but I continue north, stopping in a lay-by opposite the turning to Derrydaroch Farm just short of Crianlarich. Will it be possible to bag my last three Munro’s in this area is the question on my mind? The weather looks to be clearing up and the cloud appears to be lifting off the hills.

I’m deciding to go for it and donning full waterproof gear I set off crossing the bridge over the River Falloch then head south a short distance following the West Highland Way. A few walkers are trekking north along this path but it seems that no one is venturing up into the hills. After crossing the Allt a’ Chuilinn I’m leaving the West Highland Way and strike off south towards the spur called Stob Creag an Fhithich. The going is slow and quite squelchy and with a biting wind it’s not all that pleasant. A succession of showers pass just to the south of me and for now I stay dry. What seems like an endless ascent I eventually reach the summit of Stob Creag an Fhithich where I bump into a couple of young women from Glasgow with their dog who are slightly lost. I put them on the right track. What is now disheartening is the big descent which lies ahead of me along this very undulating and hummocky ridge. Progress will indeed be slow along this ridge leading up to Beinn Chabhair, my first of three Munro’s. It is often the case of any height gained is soon lost as I come across deep little valleys. 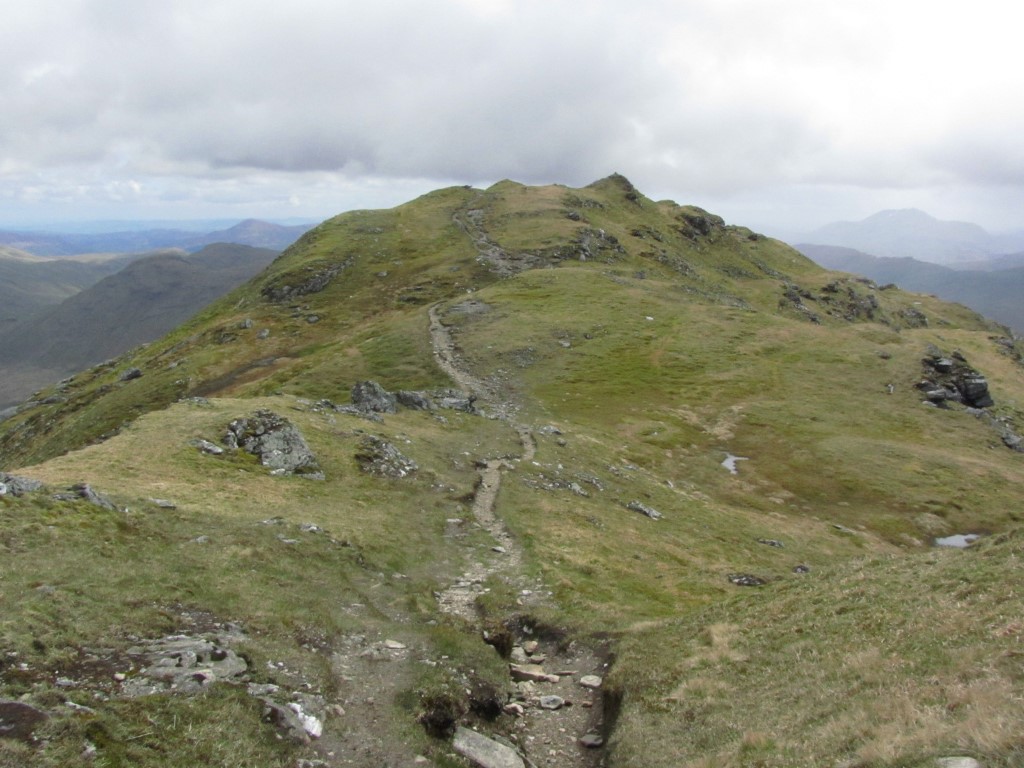 The route looking southeast towards the summit of Beinn Chabhair.

The summit cairn at Beinn Chabhair.

At a sheltered spot I stop for a quick but late lunch before making it to the 933 metre summit. At least I have a view but the biting wind means it is a fleeting visit and not a place to hang around despite it being June. I have two more Munro’s on the cards today but by now I am losing time in this rugged terrain. Heading east I descend to a col before climbing diagonally to Bealach Buidhe across pathless terrain. Beinn a’ Chroin my second Munro seems to be surrounded by cliffs with few chinks in its armour although I do spot a possible way up. Having found a path, I decide to follow this which ascends around the southern side of the cliffs with an increasing steep drop to my right. I am expecting an easy way up but I am eventually confronted by a rock step about head height and no easy way up and with no easy hand holds. It isn’t the place to have a fall. I ponder the possibility as it is likely that I will have to return this way. Placing my walking pole on the ledge above I carefully lever my way up the step and soon meet a party of walkers coming down which I will join up with towards the end of the walk. Once on the summit plateau I make for the highest point via some false summits. I am satisfied that I had reached the 942 metre summit and again don’t hang around. My main concern is that dreaded rock step on the way down. Remembering the possible alternative gap in the ring of cliffs I opt to head there but from above it isn’t easy to find. Dropping too low too early will be a big mistake. Skirting around the western spur of the mountain it is with relief to see the easy way down but this too proves quite steep but at least there is no rock step. It is then a straight forward walk across to Bealach Buidhe.

The last peak of the day is An Caisteal and the highest, topping out at 995 metres. It is now a 200 metre ascent up the rocky spur. The party that I had seen earlier are almost at the top. In a bitterly cold wind I toiled up to the top, and again I have no appetite to linger on the summit so it is just a quick photograph stop to prove that I had bagged yet another summit.

With time pressing, I am now well behind schedule. The easiest descent now is via Twistin Hill which indeed has one or two surprises up its sleeve with a gash in the ridge to cross and on its eastern side snow has drifted to around thirty feet. The other party are some half mile ahead of me and by now crossing the spur at Sron Gharbh. I follow on down the ridge with a head wind which makes my eyes water. It is even cold enough for gloves and yet this is June but it feels more like mid winter. At Sron Gharbh I decide to head directly off the ridge to a point where work is being carried out to harness the water on the Allt Andoran. Beyond that point a track has been constructed. It is a quick descent and I am pleased that the wind has dropped at lower levels. The other party has takebn a longer route for the descent and I have now almost caught them up. Crossing the Allt Andoran proves another matter and thankfully I have seen where the other party has crossed. The stream is running high and many rocks are submerged. It certainly isn’t the place to take a paddle. Safely across I soon catch up the other party who consist of a father and two adult sons. The father is tiring after doing a similar walk to the one I have done. One of the other son’s I get chatting to for the remainder of the walk. Since leaving the army, he was out on a challenge for charity to climb all the Munro’s before September but he had only just started this quest and the previous week he had been out in some atrocious weather and reading between the lines I just thought that he was being a bit too ambitious.

Well three Munro’s had been bagged after an early start from home and a three hundred mile drive I was now ready for a good rest. 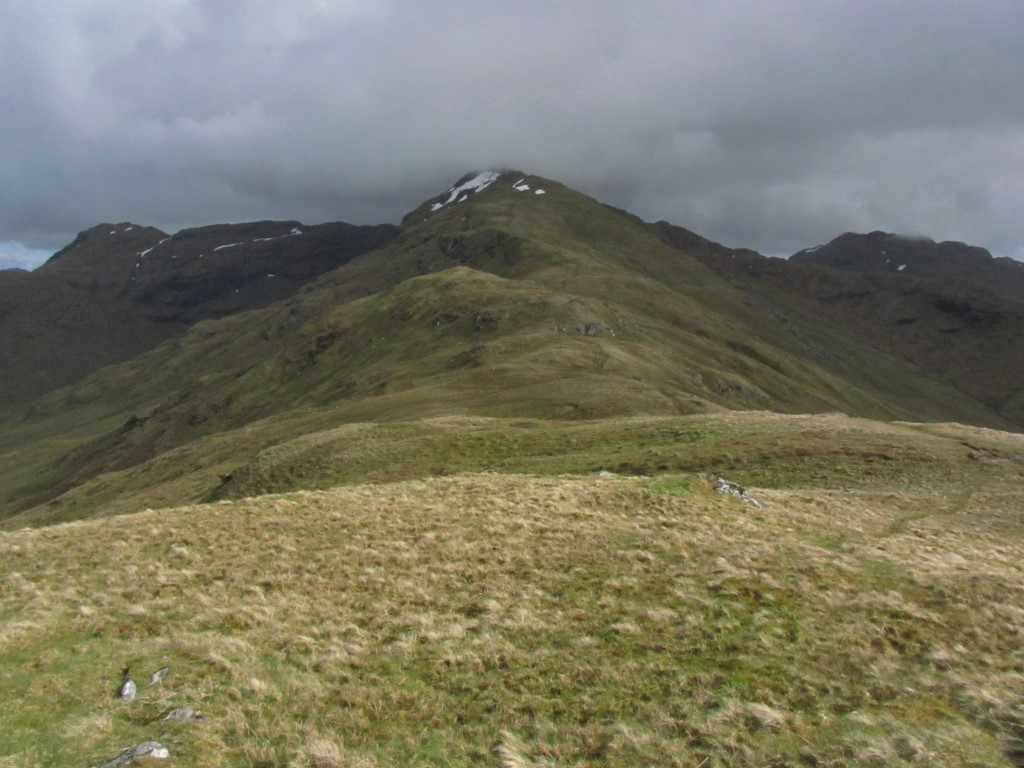 Looking back along Twistin Hill towards An Caisteal, my last Munro of the day.