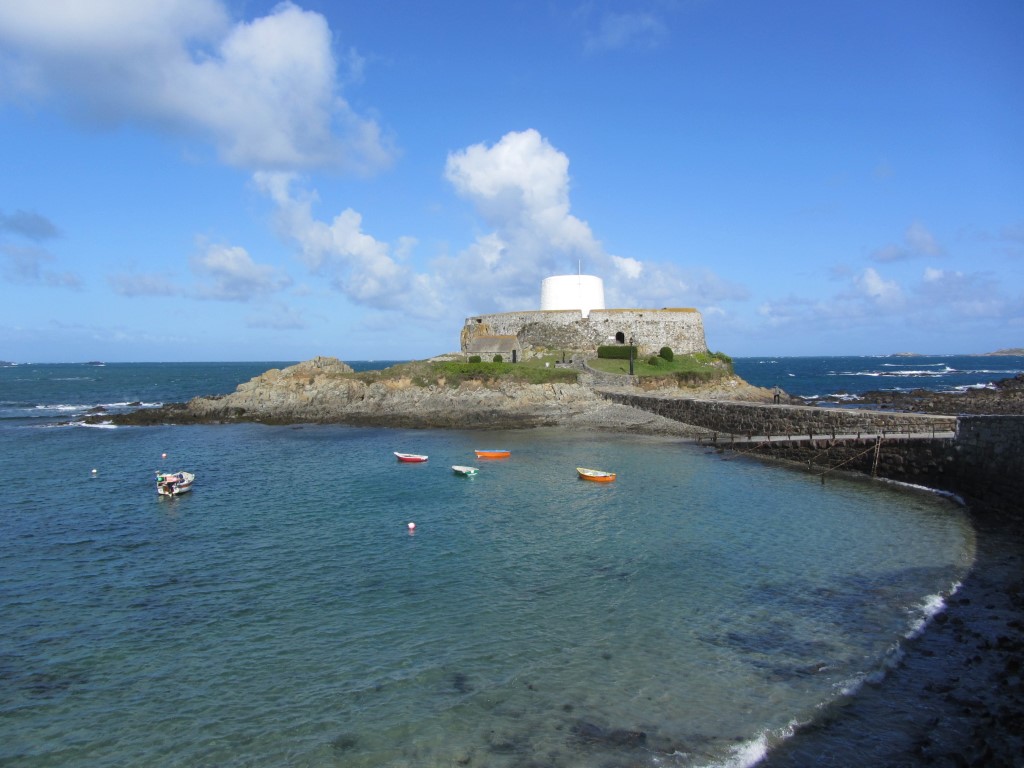 The Martello Tower at Fort Grey is now a local Shipwreck Museum.

Coastal walking has a great appeal to everyone and I have walked the coast of Guernsey a couple of times. A few years ago, my son and I opted to spend a week on the island exploring the coast and its array of war time bunkers and defences.
Guernsey is shaped like a wedge of cheese with the highest cliffs along the south coast tapering northwards to a series of sweeping bays along its northern coast. 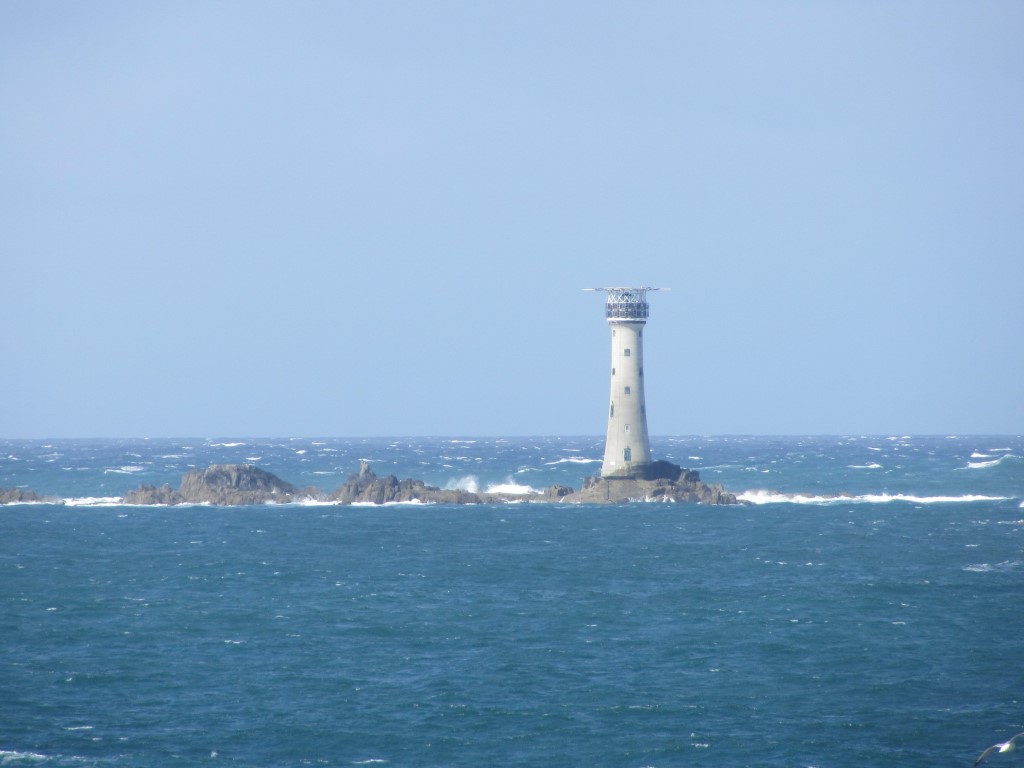 Hanois Lighthouse lies off the south western tip of Guernsey.

You can follow the coast all around the island on foot and to do the forty miles will take you around four days at a leisurely pace. If you are based in the capitol, St Peter Port you can use buses to pick up at a point where you left off the previous day and so you don’t need to take a car. The island is well served with buses and timetable book is available at a number of locations. The walking is so varied from the rugged cliffs along the south coast to the long sweeping beaches along the northern coast and there is so much of interest from ancient burial mounds to war time structures. If you prefer an ‘inland’ walk, there is a maze of quiet lanes which see very little traffic and again you can plan a linear walk from village to village using buses for the outward and return journeys. 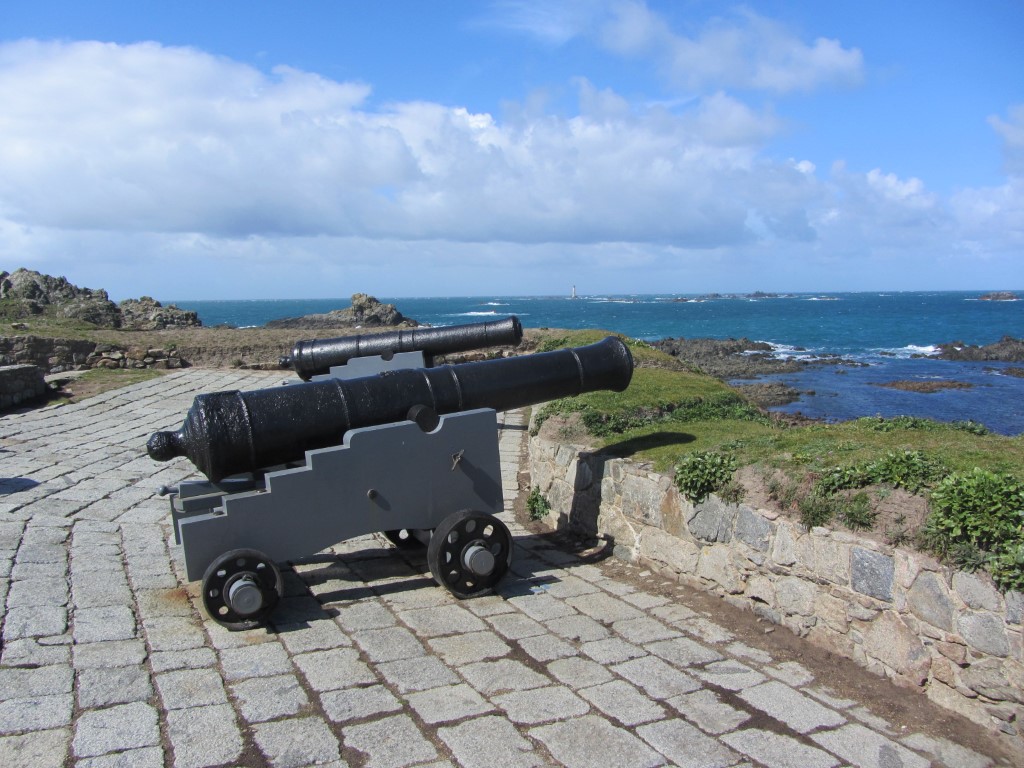 Fort Pezeries but used by the Germans during both World Wars but is a much older fort.

For this walk, my son and I are covering a ten mile section of the coast from Fort Grey on the west coast of the island to Mouilpieds in the parish of St Martin’s. 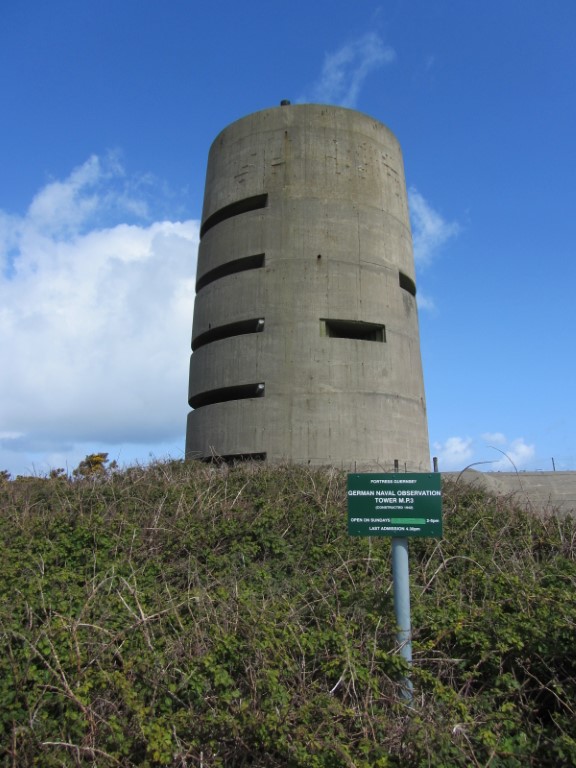 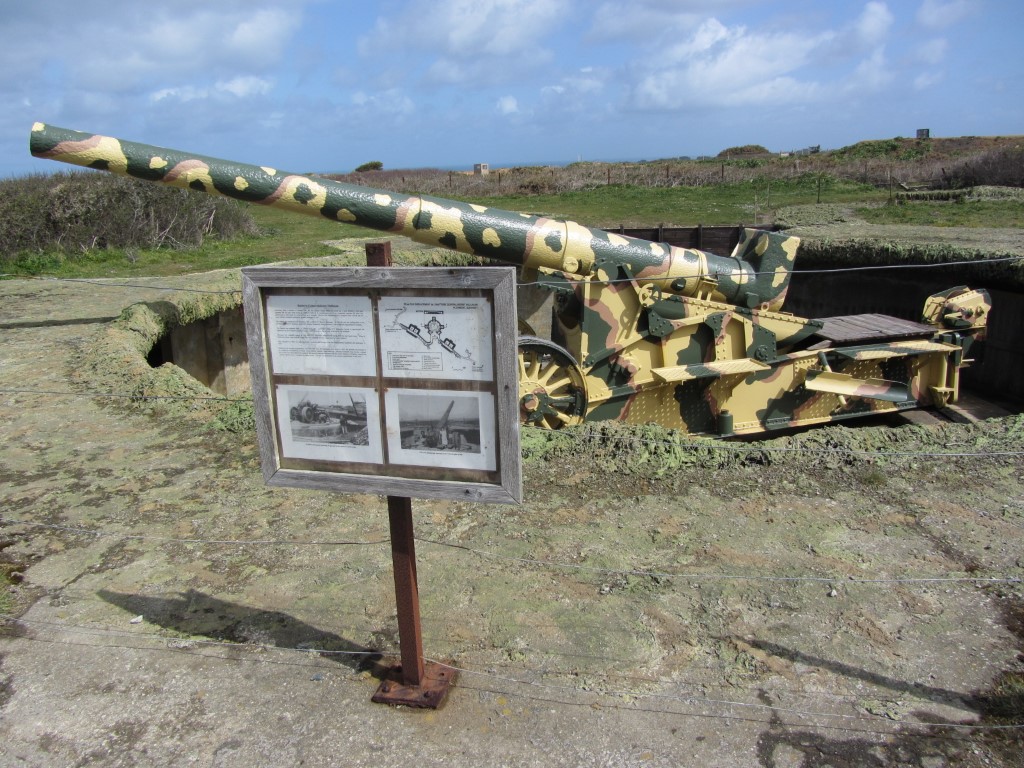 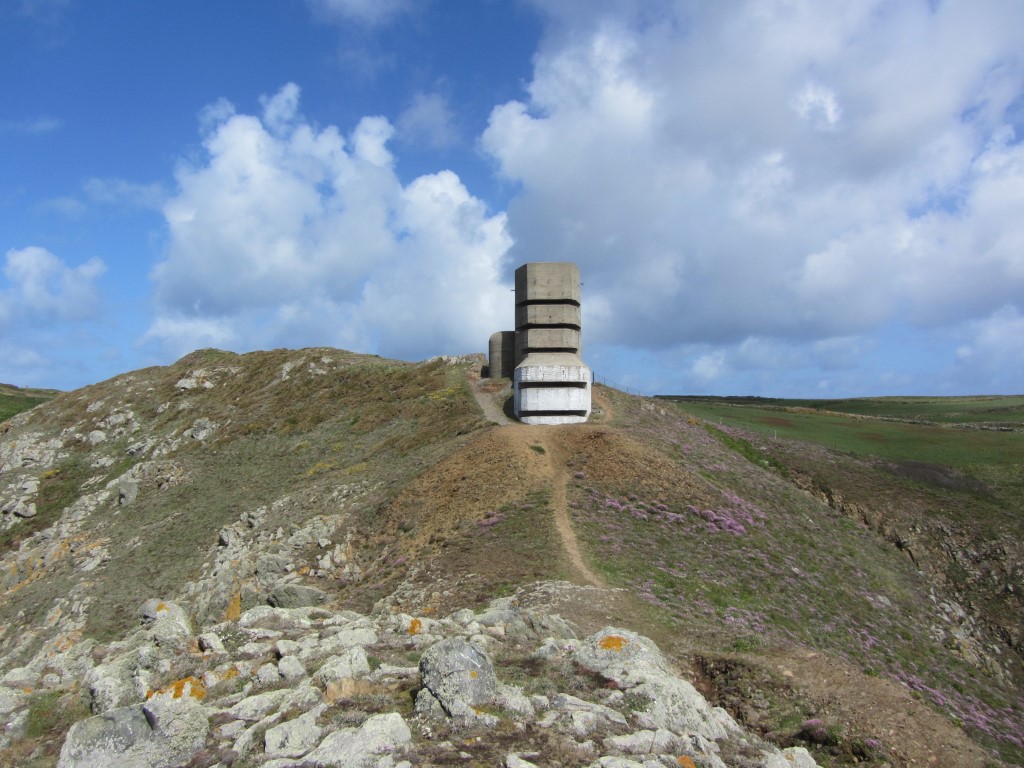 German Observation Tower at Gull Rock Torteval, one of several such towers along this stretch of coast. 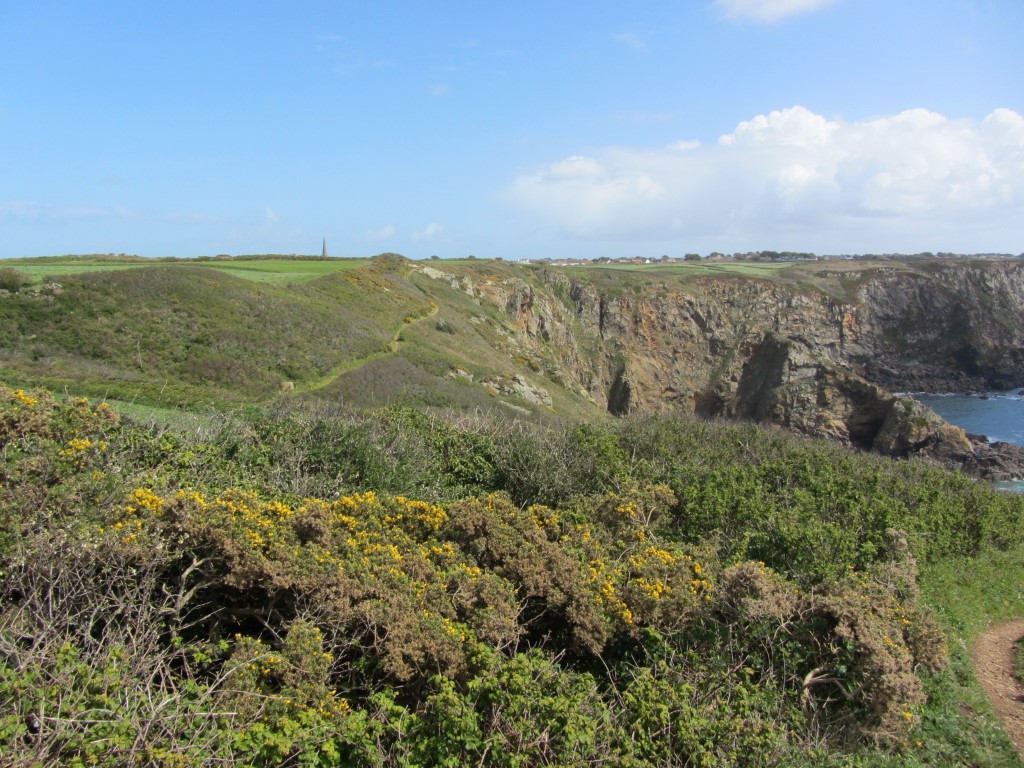 A typical view along the south coast of Guernsey with many miles of first class coastal walking. This view is above Belle Elizabeth. In the distance is the spire of Torteval Cchurch. 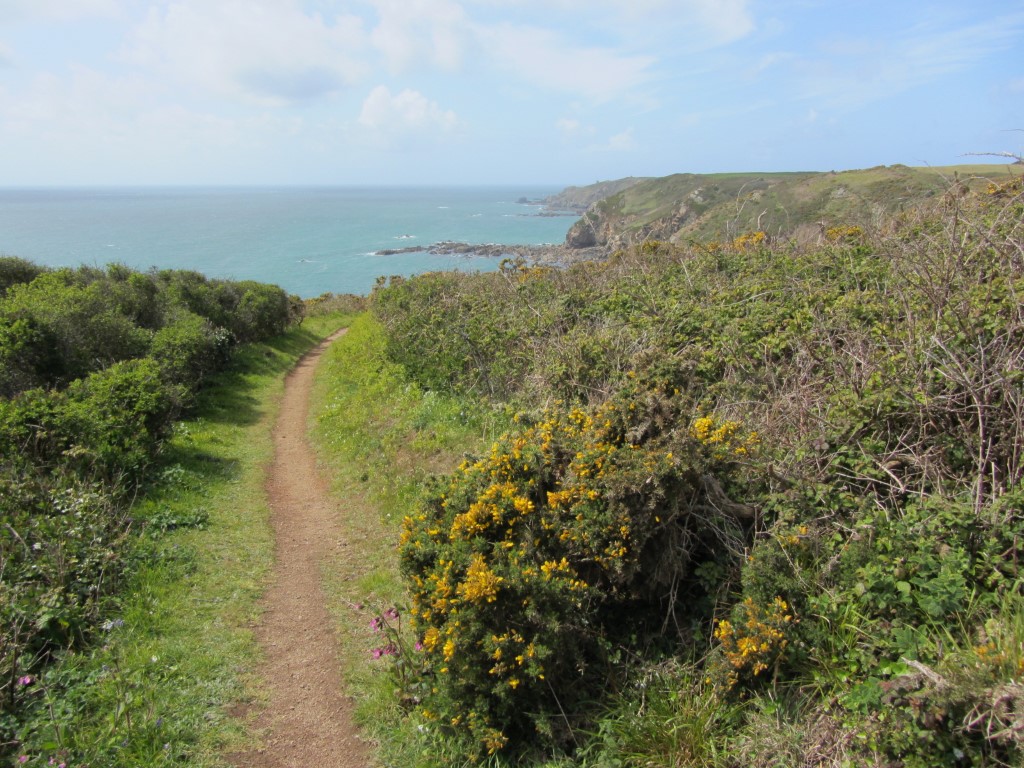 Miles of good coastal path like this along the south coast of Guernsey. This is near Les Tielles.

It’s a cold Spring morning with squally overnight showers clearing away and a fine sunny day is prospect. We catch the number seven bus from St Peter Port to Fort Grey timing it with opening time at 10am. We are the first visitors of the day to this small museum on Guernsey Shipwrecks, which is housed in a Martello Tower. Leaving the museum, we follow the shore along Route de la Lague before taking a private road along to Fort Pezeries. This is the first of several German bunkers we will explore today. To the west of us on a treacherous offshore reef is the fine rock lighthouse at Le Hanois, standing a mile or so from our location. It was constructed between 1860 and 1862 and designed by the engineer James Douglass. Prior to the lighthouse there were a great number of shipwrecks in this area. Far beyond we can make out The Casquets, another rock with a lighthouse some ten miles away.

We now follow the coastal path along the south shore of Guernsey on a good path with steps. This area is the ‘Land’s End’ of Guernsey. A small diversion is taken inland to explore Pleinmont Tower, a prominent war time defence and is probably the best known German Bunker. We discover that this will be open later in the afternoon but by then we will be some distance east on our walk. Back on the coast we continue on the good path, taking our time as there was so much to see. If you are into history of the world wars then this is the place to come. My son speeds on ahead to explore the next German bunker whilst I take it at a leisurely pace taking several photographs on the way. Inland the skyline is dominated by the spire of Torteval Church. The current church was built in 1818 and stands on the site of a much earlier church. Its spire is the tallest on Guernsey and prior to the Hanois Lighthouse it was used as a sea mark.

On the coast path we soon come across a large German Gun and a network of tunnels and trenches have been restored much to my sons’ delight. East of Le Creux Maine we find a seat out of the brisk wind to have lunch. Until now, we have had the coastal path mostly to ourselves but a few walkers now pass us heading west.

For the afternoon we stay with the coast and later at a point where the path goes slightly inland we find a café selling ice creams at La Gouffre. Back on the coast we pass a party of French ramblers. We finally leave the coast at Petit Bot Bay but not before a wander down to the beach. I had originally intended catching the bus from Le Bourg but due to a road closure noted in the morning, I decide that it would be better to head further east. A road is followed inland from Petit Bot Bay then a path to join a lane up to the main road. Our timing means that it will be a long wait for the next bus on a busy road so we opt toextend our walk by turning right then left to follow a quieter lane to Mouilpieds which just happens to be under the flight path to Guernsey Airport. At Moulipieds we wait for the bus along with another group of people. It isn’t the best place to stand on such a busy road with no pavements. When the bus does arrive, it is full including the group of French ramblers we saw earlier so its standing room only for much of the way.