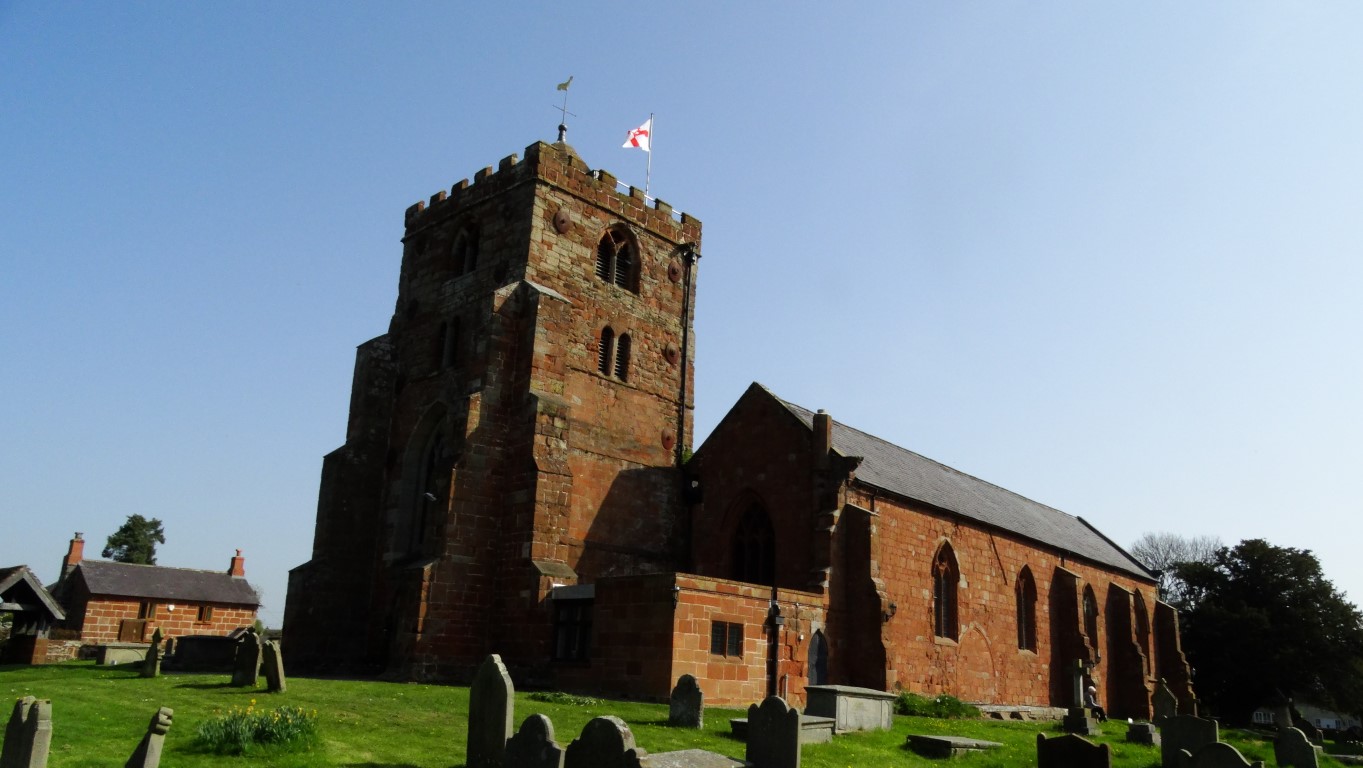 The large sandstone church at Baschurch dominates the village.

Finding a parking place in the Peak District on a bank holiday Monday can in some cases prove problematical and so last year on Easter Monday, I was joined by Steve Hull and Tony Littler to explore a area which was new to all of us and yet only around an hour and a half from Macclesfield.

Our starting point was in Baschurch in Shropshire which lies as the crow flies around seven miles northwest of Shrewsbury. The village is dominated by the large sandstone church of All Saints’ which dates from the 12th century. The interior however was fairly plain. Being not that far from Wales, the village name is first recorded as ‘Eglwyssau Bassa’ (Churches of Bassa). Setting off from the churchyard we headed south via good field paths to Milford then west via a lane before continuing on another field path. At Little Ness we paused for our morning break in the churchyard. The church unfortunately was locked but it seemed quite an ancient site and built on an area of land higher than the surrounding fields. Nearby was the mound of the motte and bailey castle. Whilst we were there, we met another couple of people out on an reconnoitre for the City of Birmingham Ramblers and doing an almost identical walk to us but in the opposite direction. We would meet them again later south of Ruyton XI Towns for another chat. 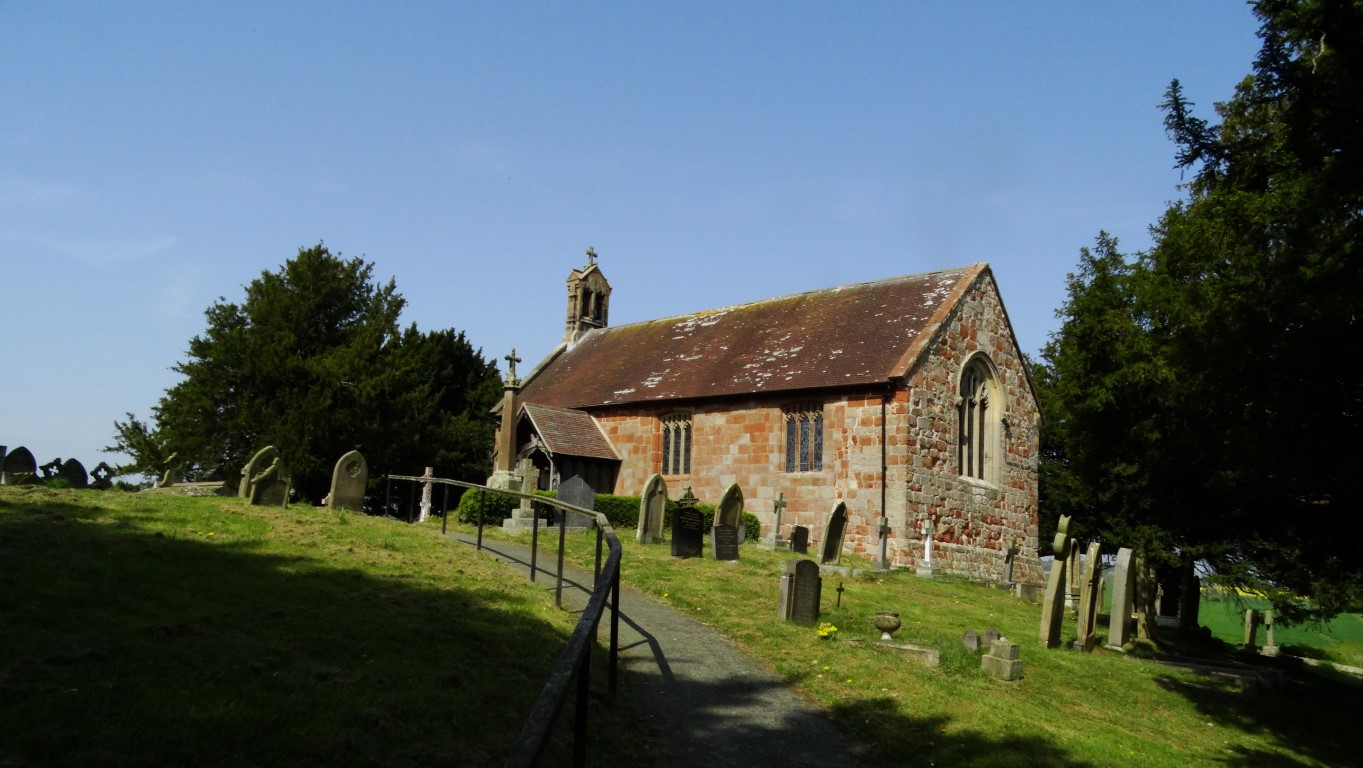 The ancient church of St Martins at Little Ness stands on a mound overlooking the peaceful Shropshire countryside.

Leaving Little Ness we now headed southwest on field paths to Great Ness and here the church was open. St Andrew’s Church is grade I listed and we briefly took a look inside. Nearby, we discovered that the A5 once ran through the village and came across an old milestone with distances to Shrewsbury and Holyhead. Not far away was the old village pump. 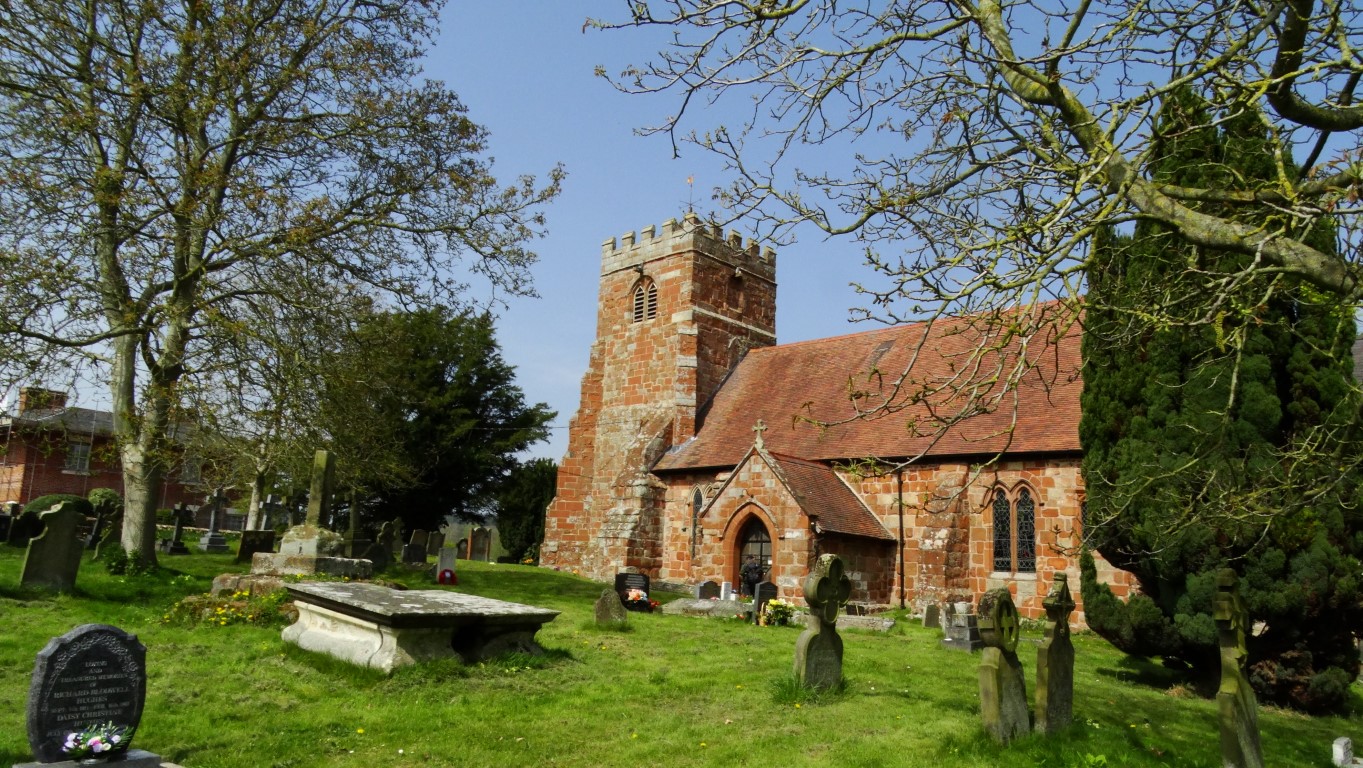 We found the church at Great Ness open on this fine spring day. 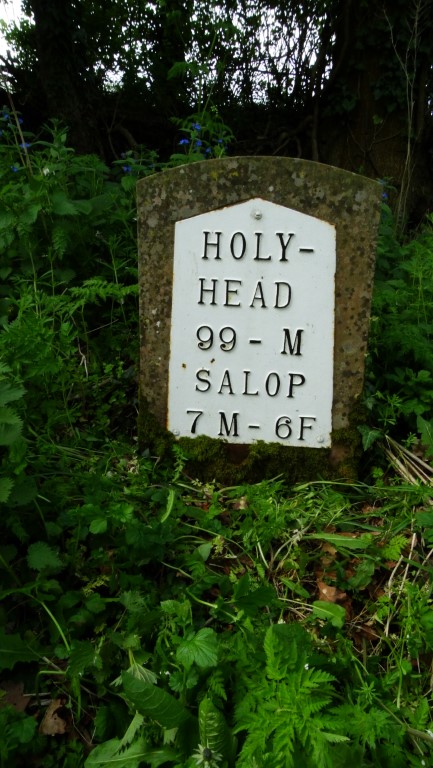 An old milestone in the village of Great Ness indicated that the main A5 once ran through the village.

We now headed towards Nesscliffe Hill Country Park but our intended footpath took a bit of finding as the stile was well hidden but after this there were no issues. We skirted the foot of the woodland and surprisingly came across a large hidden sandstone cliff in the trees. This was once a quarry area and the cliffs had been cut smoothly with historic initials and names cut into the rock face probably by quarrymen at locations which are now impossible to get to. We made for Kynaston Cave first which was located up a flight of worn steps and cut into the rock face but fenced off so there was no close access. The cave is so named as it became the secret home of ‘wild’ Humphrey Kynaston who in 1491 was declared an outlaw after the murder of local man John Hughes. For many years, this was his home where he lived a life similar to that of Robin Hood, robbing the rich and giving to the poor. Because of this, his hideout was kept secret despite the authorities trying several times to capture him. Of the two room cave, one room was for his family and then other was for his horse ‘Beelzebub’. It is believed that Humphrey Kynaston was later pardoned by Henry VIII after supplying the King with one hundred men to fight in France. 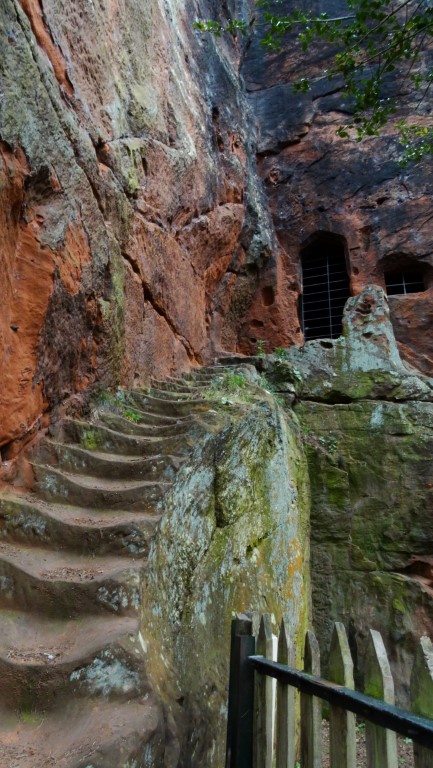 Well worn steps lead up to Kynaston’s Cave home for many years of the outlaw Humphry Kynaston. 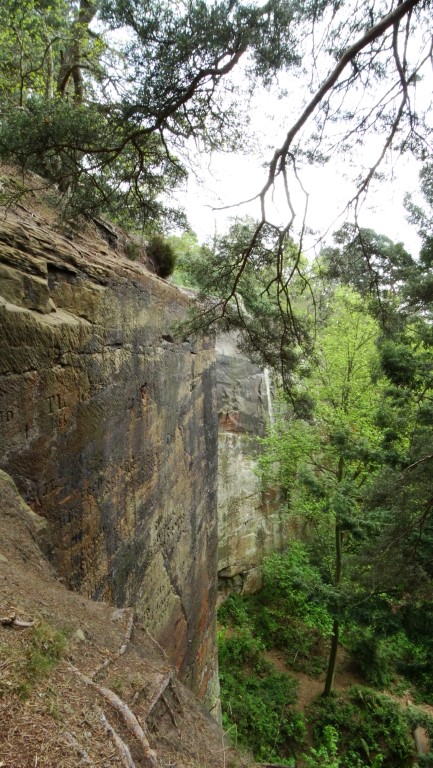 A steep path led uphill to the wooded summit and we found a picnic bench for lunch. Nearby was the hill fort known as Nesscliffe Hill Camp which dates from the Iron Age. There are still extensive earthworks and recent tree felling had revealed the embankments.
We stopped briefly at Oliver’s Point where we had limited views through the trees to the west but today it was quite hazy. Leaving the wooded top we took a wrong turn and so had to back track a short distance and joined the lane through the hamlet of Valeswood. The path north over The Cliffe provided some fine walking along a low ridge on common ground and a small detour led us to the trig point that crowned the highest spot here. Again, views were poor but the walk towards Ruyton XI Towns was very rewarding. 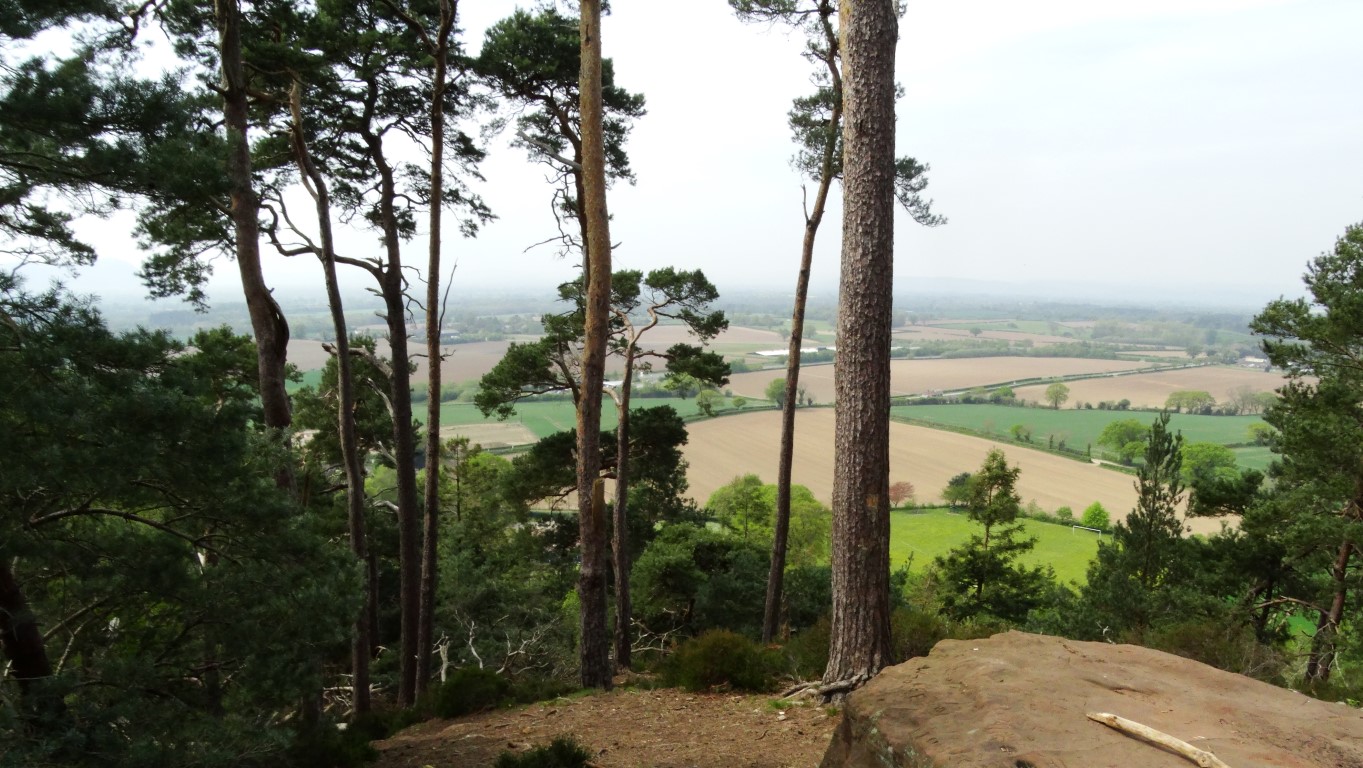 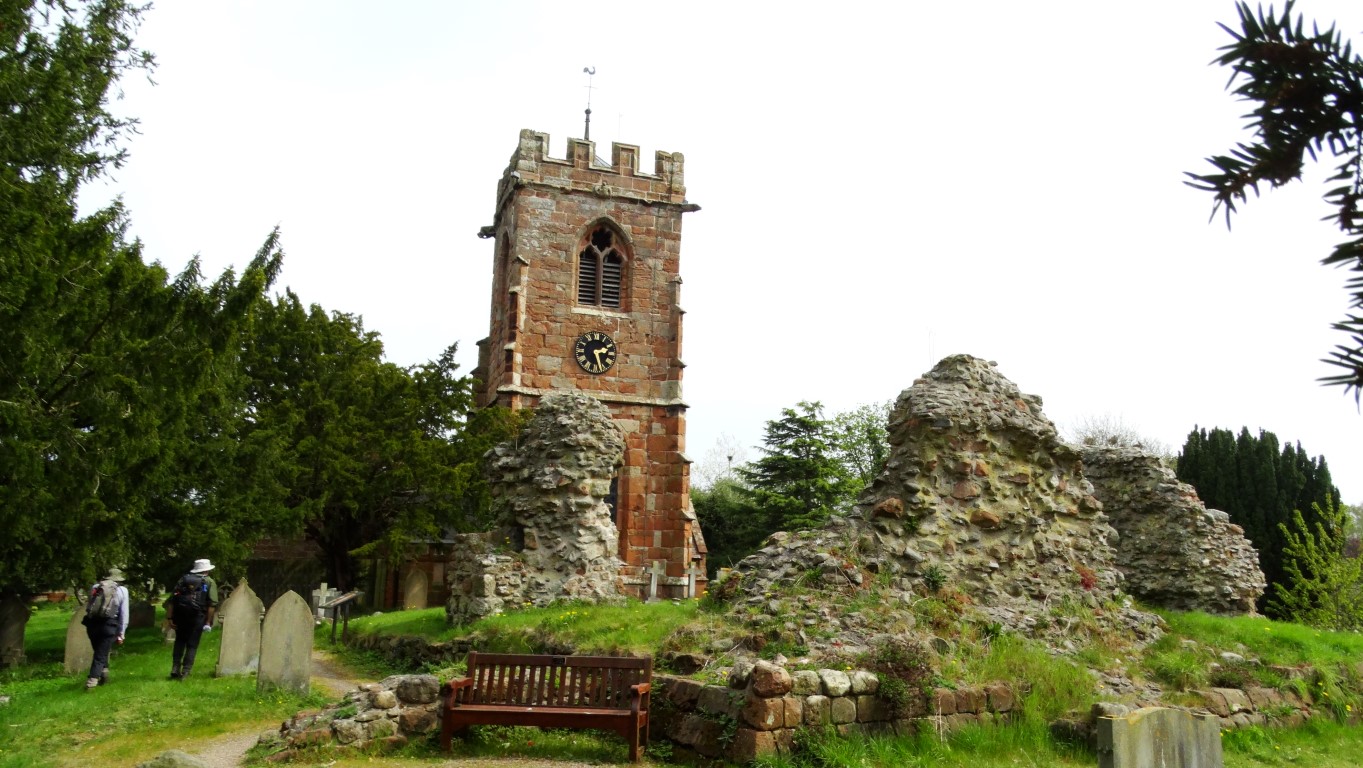 Ruyton-XI-Towns is a fascinating village and west of the church are the remains of the castle.

Ruyton XI Towns is a place I’ve always wanted to visit as it has such an unusual name. It is unique in having the only Roman numerical in a name in the whole of Britain. The ‘XI’ comes from the small eleven hamlets once being amalgamated into one parish but now some of these hamlets are now in the neighbouring parish of West Felton. We headed for the church first and in the churchyard we came across the ruins of the castle. Little is left of the castle other than a few walls, and being close to the Welsh border, the castle was destroyed on more than one occasion. In 1308, an attempt was made to re-found the town as New Ruyton. It was awarded a charter briefly, but as raiding continued, the new town declined and lost most of its rights. The church of St John the Baptist was also visited and this building dates from the 12th century. We found a seat in the churchyard for our afternoon break. 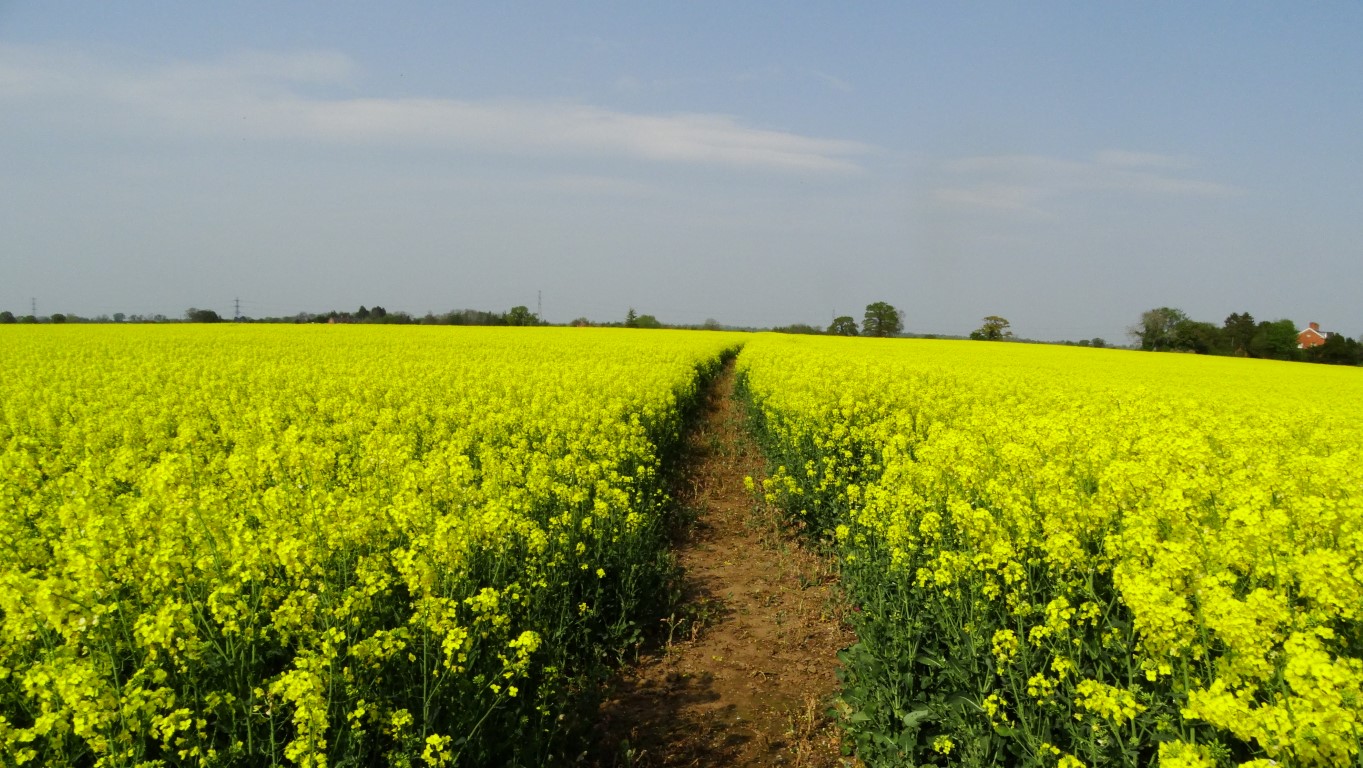 We were grateful to the farmer who had cut a good path through the oil seed rape as we neared Baschurch.

During our rest time we could see a path from our vantage point which wasn’t marked on our maps. Steve and Tony opted to follow this as it was in the general direction that we would be taking. Meanwhile, I wanted to walk through the village to see what the place had to offer. I arranged to catch up with them at a pre arranged spot beyond the village and I arrived only a few minutes after them. We now skirted the upper edge of a wood then took a field path to join the lane towards the hamlet of Stanwardine in the fields. From there it was just a case of heading back to Baschurch but to add variety we opted to follow a couple of field paths and the second one was through a field of oil seed rape where thankfully the farmer had cut a good path.
Overall it had been a fascinating and varied walk from field paths, peaceful lanes, wooded hills and much of historical note and an area worthy of further exploration.