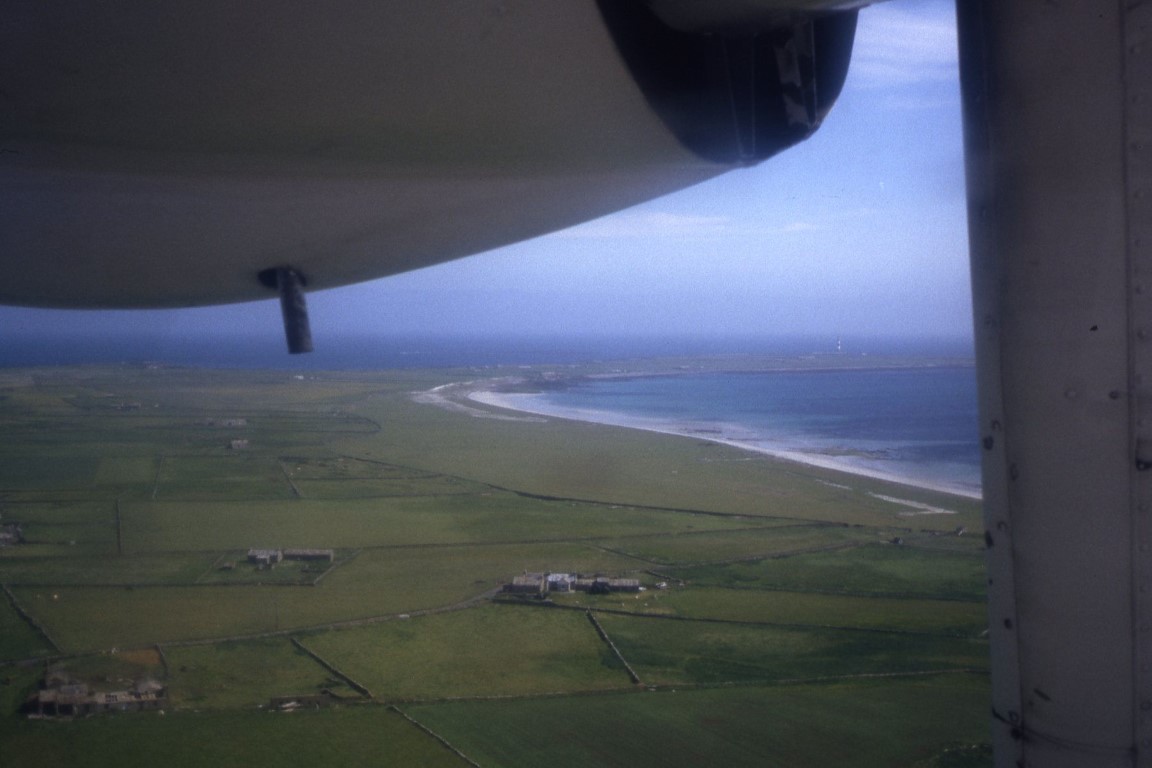 Circling over North Ronaldsay with a view down to Linklet Bay which I would visit later.

In a series of three forthcoming articles, my mode of transport will be a plane to reach the starting point for my walk and for this I am not even leaving the British Isles.
Two of my three walks using a plane to get to the start were planned at very short notice and my first time I tried this was when I was in the Orkney Islands many years ago. Now there was no long term advance planning for this but the opportunity arose where I could fly out to one of the outer islands, but which one. I decided to go for the remotest and with the promise of good weather the following day booked a flight out to the tiny island of North Ronaldsay.

It was just a short drive from Kirkwall, my base, to the airport on this fine sunny morning and I had plenty of time to spare. Whilst waiting in the departure lounge the weather had changed from sunny skies to misty grey conditions so that was not a good start. The Islander plane duly arrived, and a little late and under a grey sky we boarded and soon we were off flying out and passing to the east of the island of Shapinsay and soon we were back into the sunny skies. The flight had been altered and would now include a stop off on the island of Sanday before off again for the short hop to North Ronaldsay.

In bright sunshine we landed, and having watched the plane take off again from the short grassy and uneven runway I set off north along the straight lane running up the spine of this small and flat island. After about a mile I branched left on another lane to reach the few scattered crofts at Ancumtoun before crossing a couple of fields to reach the coast. Turning east I now followed the shore with the aim of reaching the tall brick lighthouse in the distance. The going underfoot was slow as the shore was rocky and pebbly with a few stretches of good sand to walk on. Later as I headed closer to the lighthouse there were far more birds about, in fact there were thousands of them. The lighthouse is a fine building consisting of a slender brick tower painted with white bands. Built in 1854, this 139 foot high structure is the tallest land based lighthouse in the British Isles and cost just over £6,000 for its construction. In 1889 it was repainted with two white bands so it could be better seen. The climb to the top is via 176 steps but it was closed today. 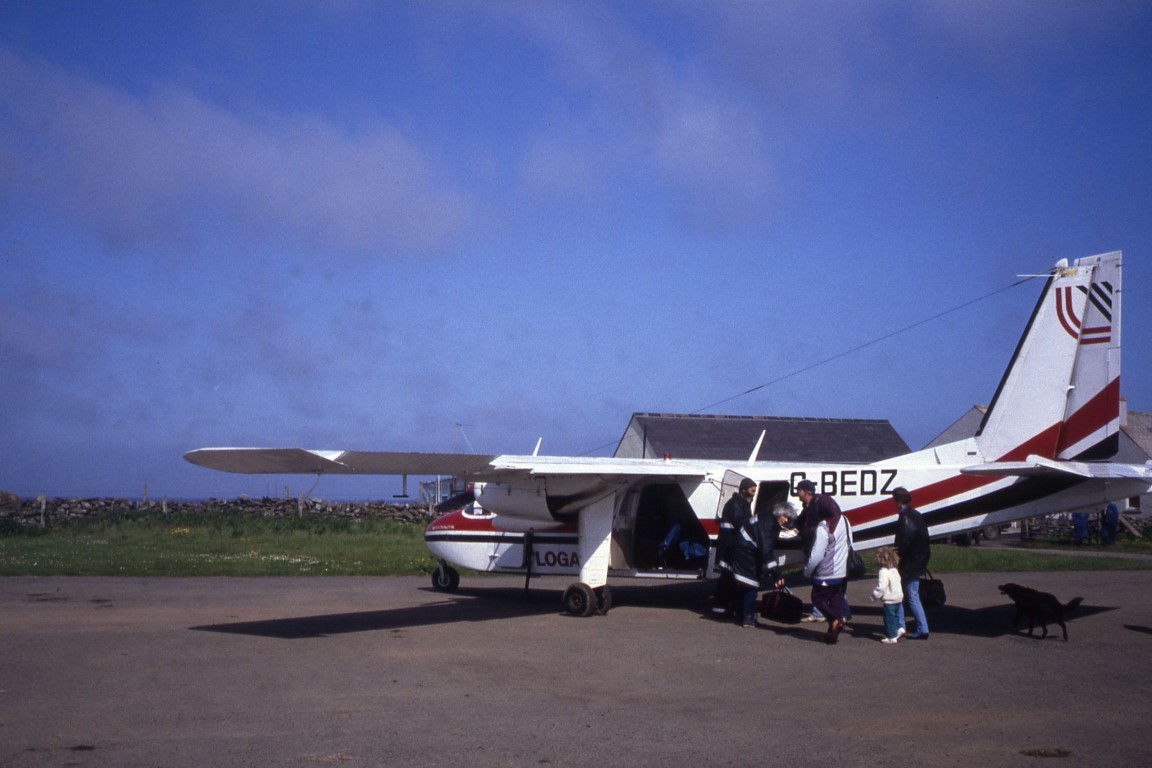 The Islander plane at North Ronaldsay. Along with the pilot, this plane can carry seven passengers. 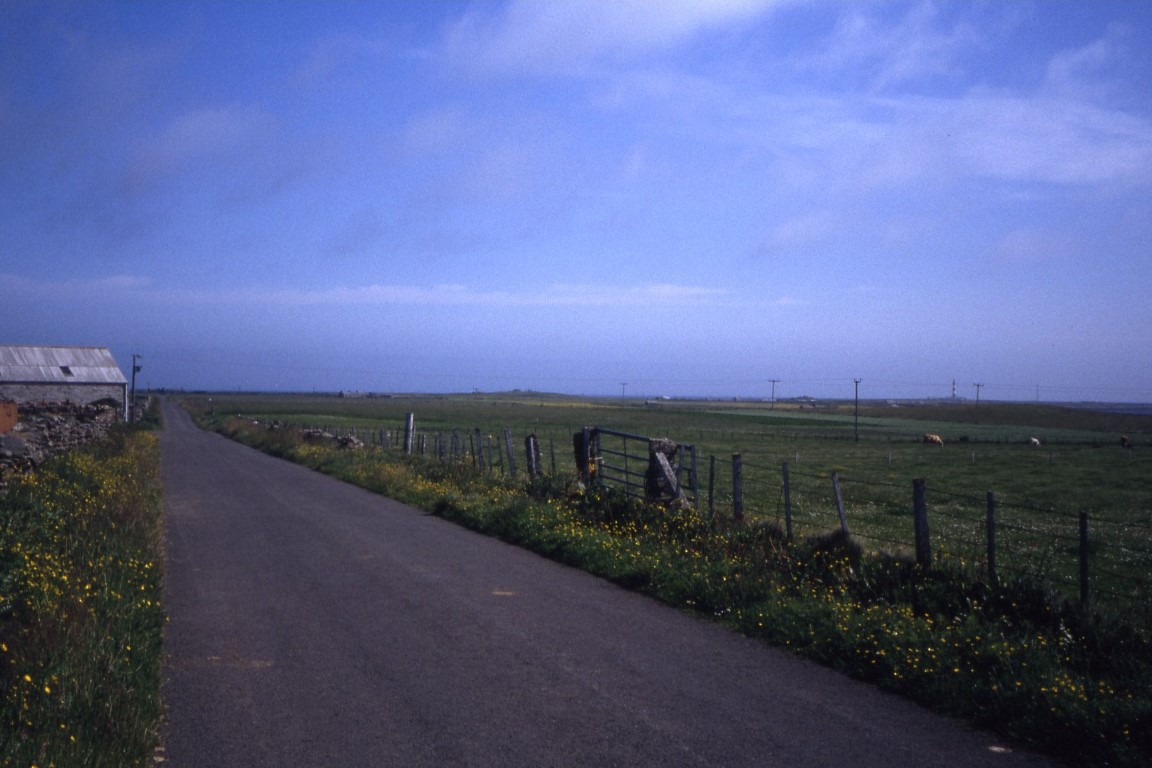 Setting out along the straight and open lane towards the northern end of the island under big skies.The lighthouse can be picked out towards the right of the photograph. 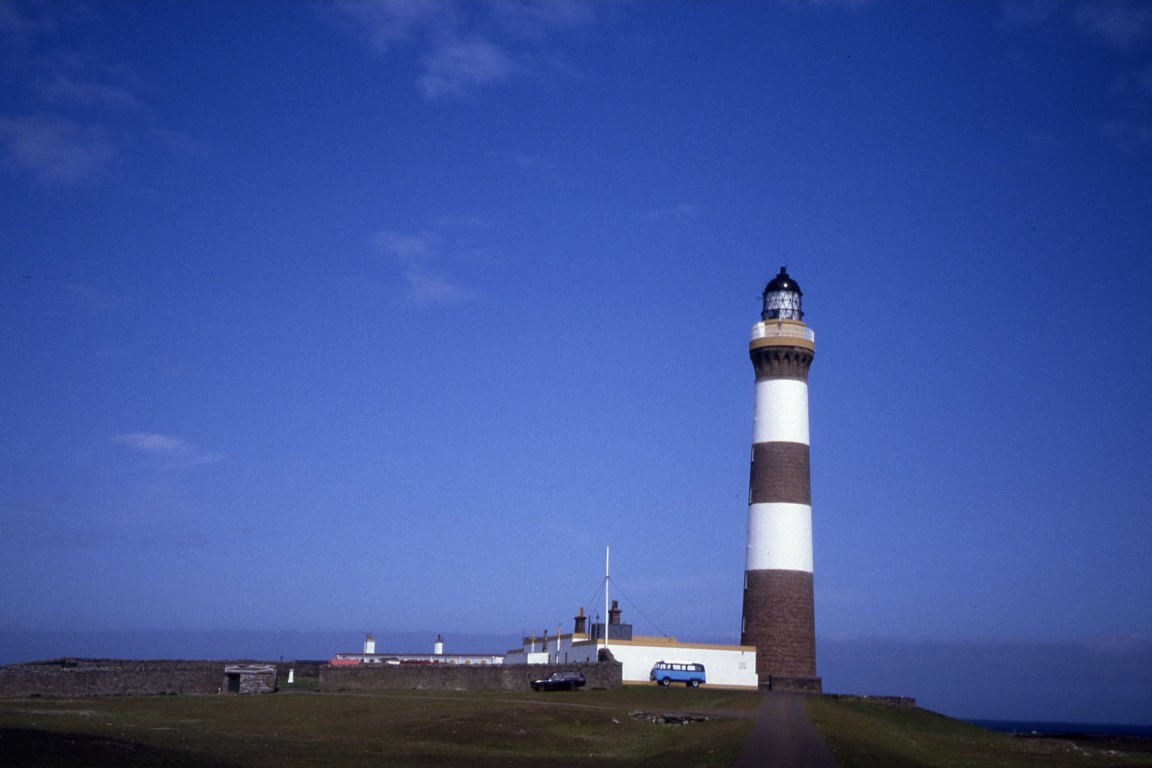 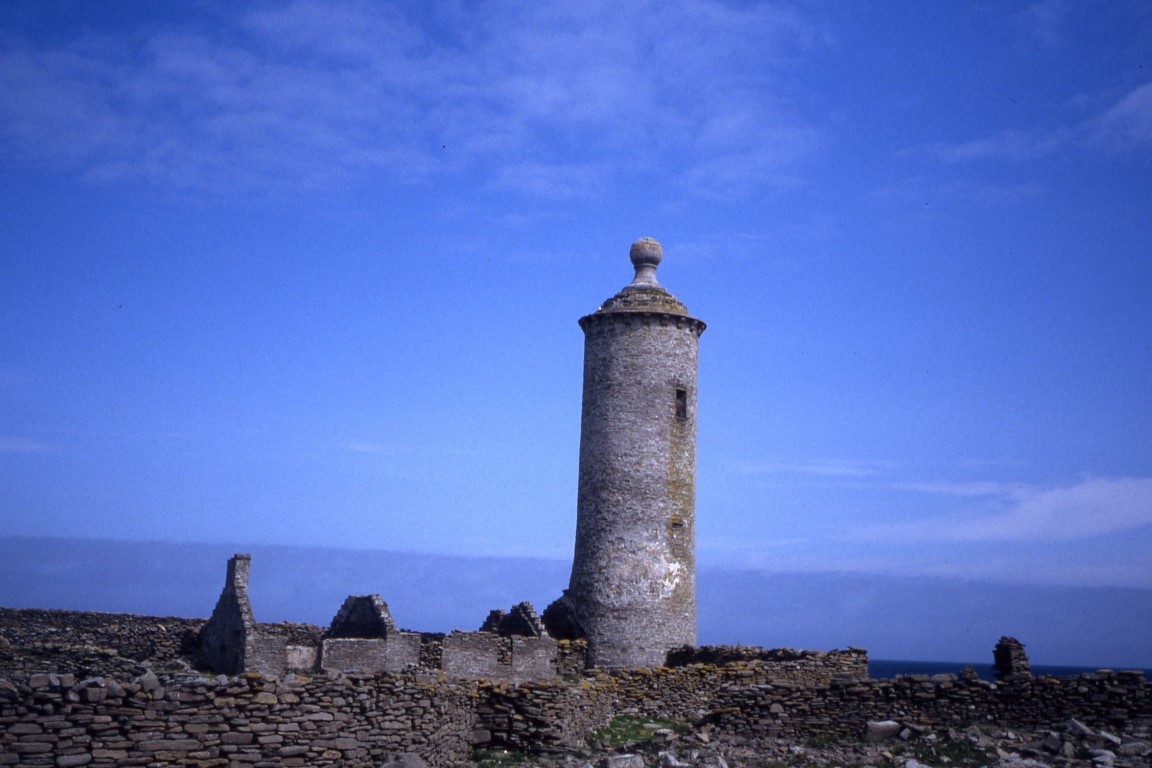 The original lighthouse at Dennis Head was first lit in 1789. 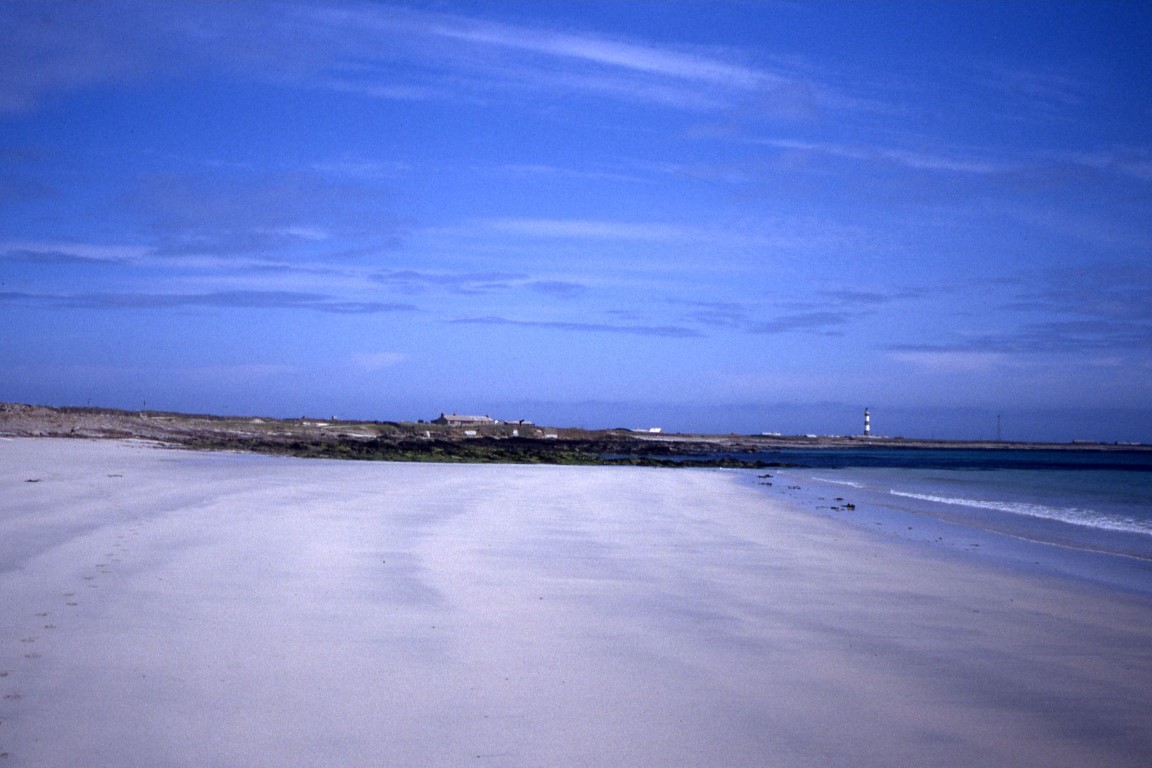 The white and empty sands at Linklet Bay were not exactly crowded.

I headed next to Dennis Head which is dominated by the Old Beacon, a crude stone tower which stood amidst a jumble of ruined buildings. This earlier lighthouse was first lit on the 10th October 1789 and was in use until 1809.
I paused awhile before rounding Dennis Loch and decided to take the road westwards rather than stay on the rocky foreshore. Later at Snash Ness I decided to regain the coast which meant climbing over a fence. Soon I was on the fine white sands of Linklet Bay which provided a mile of easy walking. I stopped and chatted with an islander gathering seaweed which would be sold to an American company as seaweed had a number of uses in the chemical industry. I now lost the sunshine as thicker cloud rolled in from the south and I continued at a leisurely pace around Bride’s Ness and here there were many seals offshore. The going again became slow to reach Strom Ness and at the same time it was turning misty. I still had plenty of time to spare as I followed the shore to South Bay which had another fine stretch of sand. What I hadn’t bargained on was that it had now turned very foggy with a visibility of only around fifty metres. At the pier at Nouster I got chatting with another islander who said that the plane wouldn’t be back if the fog stayed like this. This was all I needed, and so on a dull and very foggy afternoon I took the lane north to Hollandstoun thinking about at my options. I paused to visit the church and afterwards took a longer route back toward the airfield. With time still to spare I headed west out to Doo Geo and sat on the rocks looking out on a very foggy North Atlantic before returning to the airfield waiting room. The staff there were uncertain as to whether the plane would return and there had been no phone call from Kirkwall to say that the plane wasn’t coming. Time slipped by in the silent waiting room. Was I going to be marooned on a remote island I thought? Where would I stay? Did I have enough money? All these thoughts went through my mind. As time dragged by, the sound of an aircraft approaching was music to my ears and I was soon aboard and being whisked back to Kirkwall Airport and back into the sunshine. 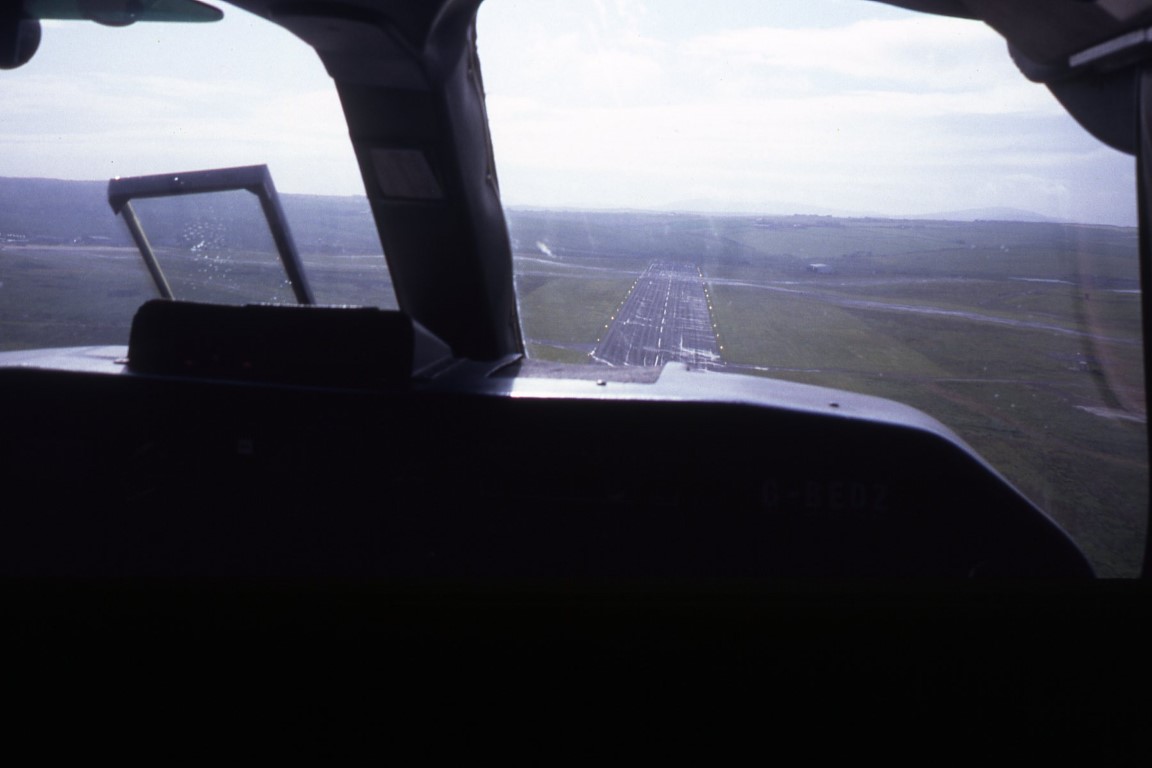 Returning to Kirkwall Airport. The final approach after an exciting day.