On Christmas Eve Ian Mabon lead a group of East Cheshire Ramblers and two visitors from the Barnsley area on a walk across the edge of the Kinder plateau. As we waited in the cars at the start in Manor Park in Glossop the weather looked most unpromising despite a reasonable forecast. However, it soon improved and we started out up the Shelf Brook valley leading to the Doctor’s Gate path. The path is shown on maps as a Roman road, but is not like most people’s idea of a Roman road and it is difficult to imagine the legions marching along it. The path is now thought to be of late mediaeval construction.
The route starts out up a quite gentle gradient before crossing the stream on a modern bridge and then ascending steeply on boggy ground. This soon leads to a path on a shelf high above the valley which eventually meets the Pennine Way. At this point we met one of the few people we saw on the tops all day. He turned out to be a local mountain rescue volunteer who had come to see if we needed rescuing. We soon assured him that we knew where we were going.
After crossing the Snake Road, the next part of the route was on a paved section of the Pennine Way and although tedious going in the mist it was easy to follow and allowed us to make up for earlier lost time. We stopped for lunch on the unlikely summit of Mill Hill which offered a few stones and some peat hags to sit on. It is doubtful there was ever a mill on the summit. We left the Pennine Way on a good track and visibility soon improved. We soon turned off this track to head towards the trig point on Harry Hut on a clear but boggy path. There is no sign of a hut nowadays, but there could have been a shooting hut at one time.
After the summit the route was mainly downhill back to Glossop at first across moorland and then alongside streams and through fields almost to our starting point. 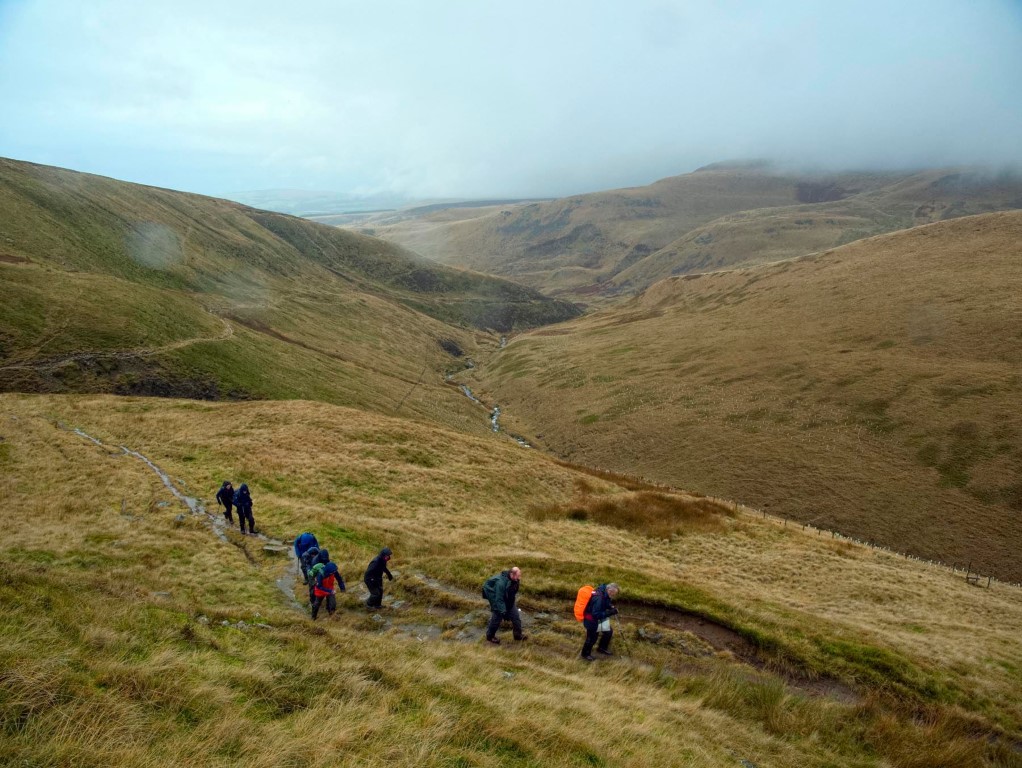