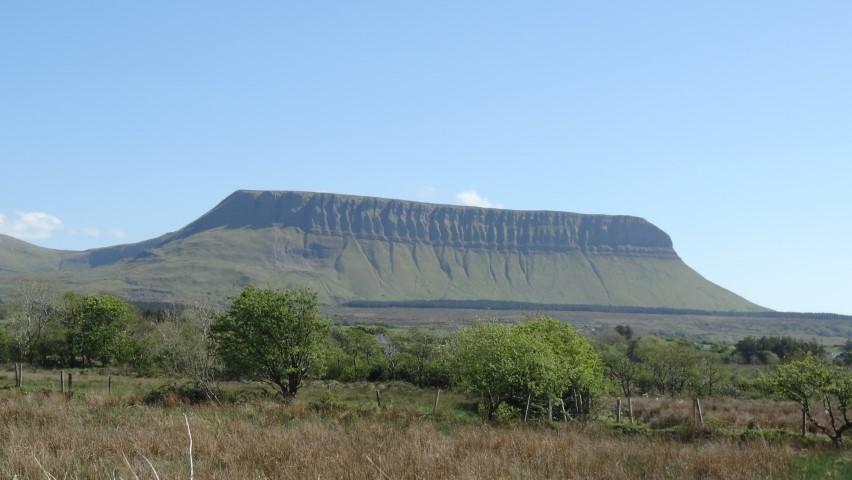 The eastern third of County Sligo is occupied by The Dartry Mountain’s of which the most famous mountain is probably Ben Bulbin. It’s not the height by any means, it purely its shape which is a landmark for many miles around. I have passed it many times on my travels but have never got around to climbing it, that is until this summer. One reason for this is that walkers aren’t necessarily welcomed to this area and so this walk may throw up a few issues.

From my base in Strandhill it is only a short drive to Ben Bulbin, and quite wisely I park up at the official car park at Gortarowey which lies at the end of a cul-de-sac where some signed forest trails lead off. It is a fine morning as I set off for this walk to climb Ben Bulbin but there is no direct access from this area as the mountain is lined with cliffs.

I start out by walking away from the mountain down the cul de sac lane which I have just driven up before turning left via a long straight road with views northwest towards Sligo Bay. Eventually at a T-junction I turn left to be met by signs stating to park here would be an offence and walkers are not welcome. Ironically, this is a spot indicated in older guidebooks on where to park. A track soon leads uphill and notices make it quite clear that to proceed further will mean that you will be trespassing. With no one around I take a chance. The track is enclosed with good hedges and I will be soon out of sight, or will I? Ironically before I am out from view I can see a lone figure some distance behind me. Is this another walker or an irate farmer? I press on and I am soon well hidden and ascending the enclosed track to reach another gate crowned with an array of wire together with another trespass notice and making it impossible to proceed and further. It is fortunate that a couple of parallel rungs on the gate have been prized apart and removing my rucksack I am able to squeeze through. So far, so good! 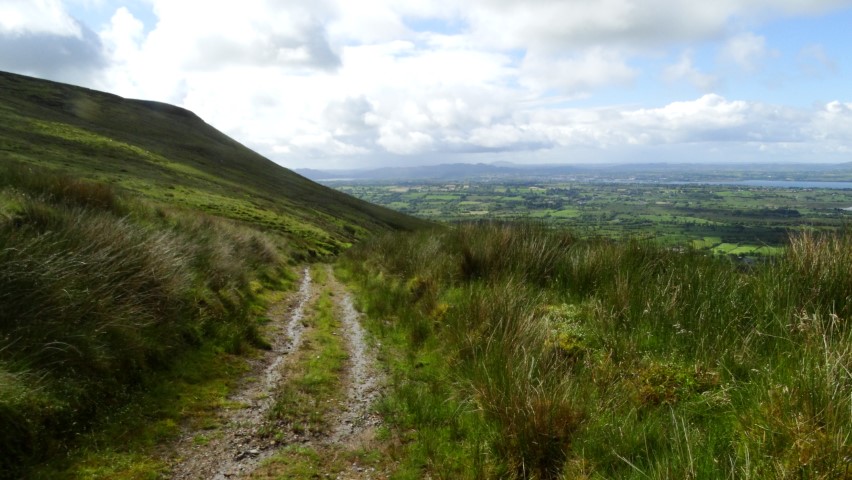 Track leading up to Ben Bulbin at Cartronwilliamoge which gives me enough cover not to be seen from below.

The hillside is more open but thankfully I am quite camouflage with my beige jacket and beige trousers so I am expecting not to be noticed. Every time I stop I do so where I can’t be seen from the farms below. I zigzag my way up on the track which thankfully although open gives me fairly good cover. The other person that I had spotted earlier is indeed a walker but he making his way up the hillside further northwest of me. The terrain later became rougher and as the slope eases off I can for awhile be probably seen on the skyline. In many respects I am glad to be out of sight of the farms which lined the valley far below. 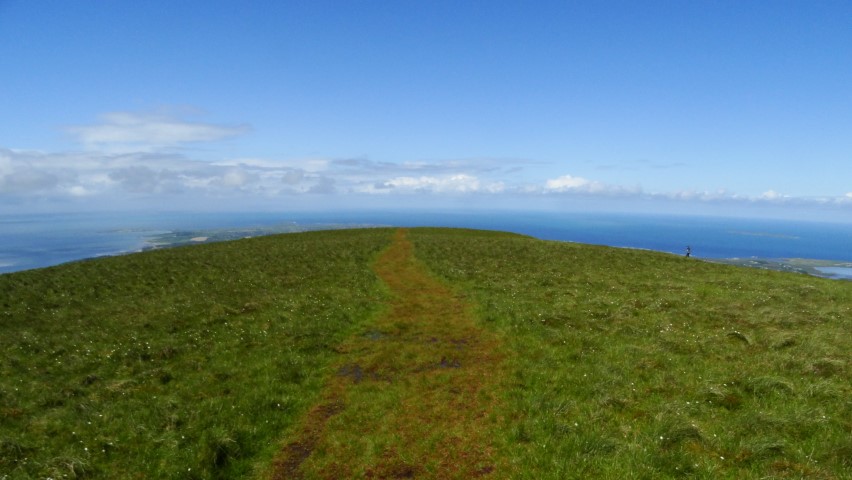 The plateau on Ben Bulbin leading out to ‘the prow’. 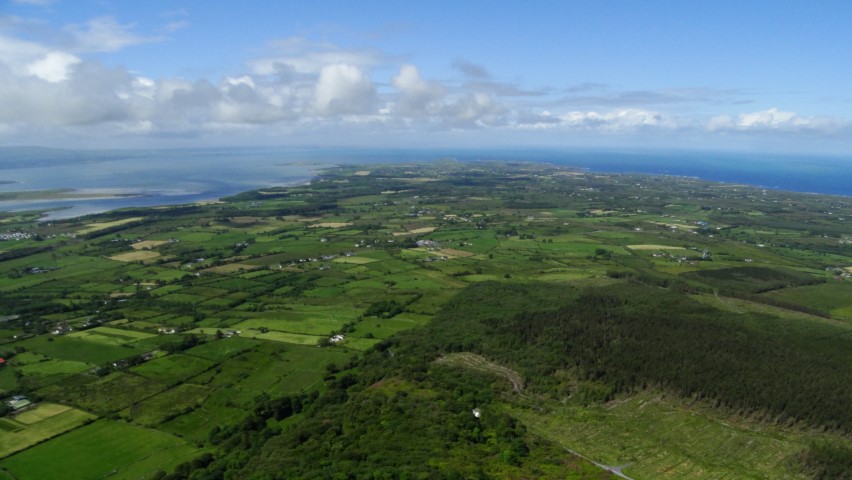 On ‘the prow’ which feels as if you are in an aeroplane. 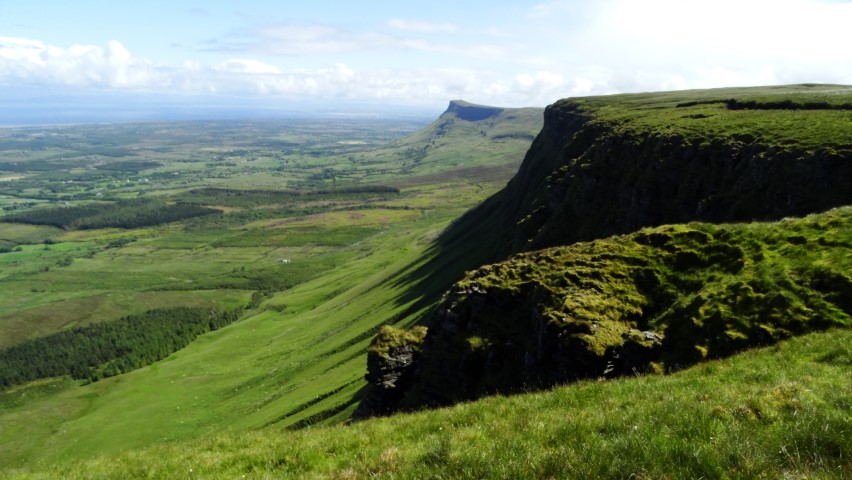 The view east along the cliffs towards distant Benwiskin. 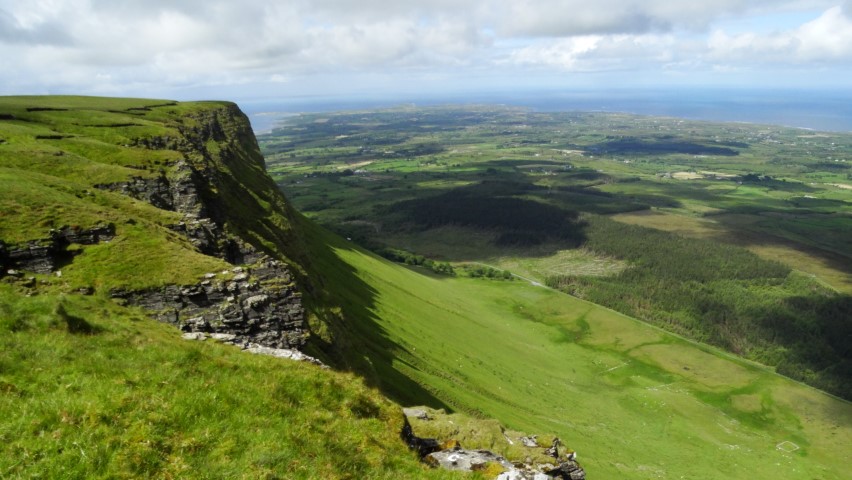 The view west along the cliffs across county sligo to the blue Atlantic beyond.

Ahead lies a flattish area of boggy moorland with a few spots fenced off with water filled swallet holes which look to be bottomless. I keep well away and make my way out to Barnarobin, the nose or prow of the mountain that faces west from Ben Bulbin. The other walker isn’t far away now but had reached the nose some ten minutes before me. The view is impressive here with a wide view out over an array of little green fields to the blue Atlantic beyond. A few showers are around but for now I mostly have the sunshine to enjoy. It feels almost as if you are in an aeroplane at this location. After taking a few photographs I opt to follow the cliff top north eastwards and passing the other walker on the way. He is German and we manage to have a brief conversation with his broken English, and he asks me to use his camera to take his photograph. We go our separate ways but the way along the cliff top isn’t that straightforward as I have to cross numerous rivulets which drain from the wet and boggy summit. 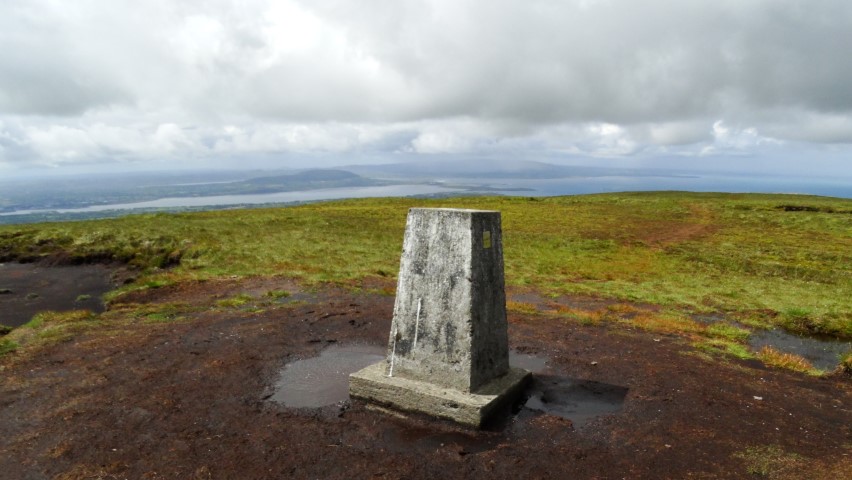 The trig point on Ben Bulbin 526 metres lies at a slight rise on the peaty moorland. 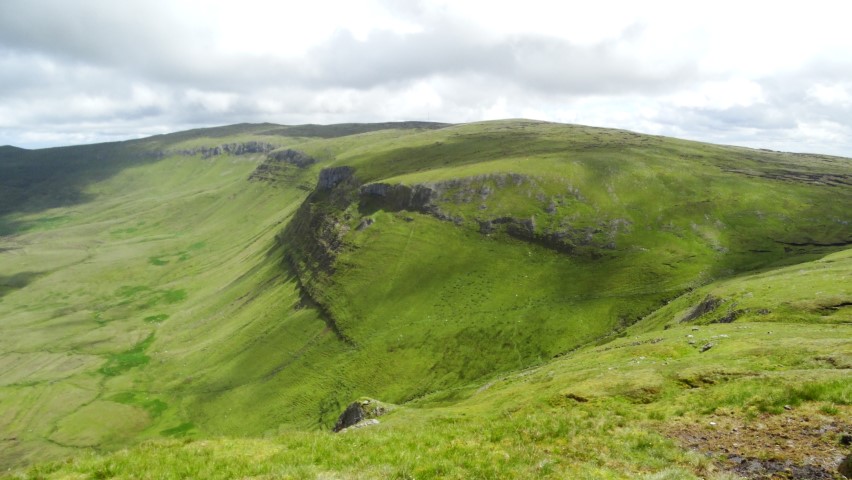 My route down on the eastern side of Ben Bulbin. The path can be seen running diagonally from top right to bottom left.

Veering away from the cliffs I go to visit the trig point which is located on a slight rise at 526 metres. The landscape is very peaty but from here on there is a path albeit a peaty one. With shower clouds becoming more apparent I head southeast over a secondary summit to reach a col. I have spotted a path which leaves the plateau and runs northeast parallel with a stream. Descending this is the easiest way which eventually takes me onto a bog track and later a minor lane. Showers come and go giving brief spells of heavy rain but with the stiff breeze the sun soon came out again and I quickly dry out. 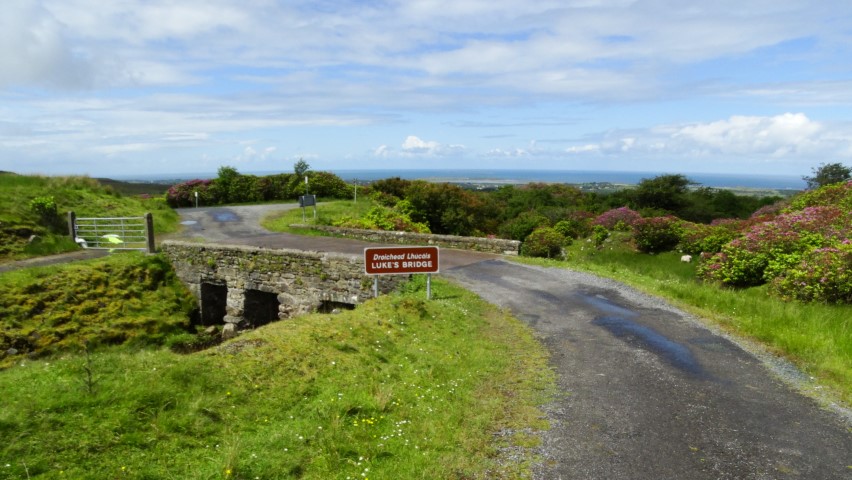 My route back via Luke’s Bridge among banks of rhododendrons.

Easier walking along the top edge of the forestry plantation and a signed path.

I now descend via Luke’s Bridge and head west along this minor lane through the rough moorland with copious amounts of flowering rhododendrons either side. I now want to join the Ben Bulbin Loop Path (a signed trail) which will lead me back to the car park but getting to it is another matter. It might be only two hundred yards away but this means climbing two fences and crossing watery ditches and negotiating an area of tussocky grass pitted with holes. It takes awhile but I manage it without getting wet feet. Once on the Ben Bulbin Path I am now on a good surface for the last mile walk back to the car. This path runs along the top edge of a forestry plantation with good views up to the serrated cliffs of Ben Bulbin. 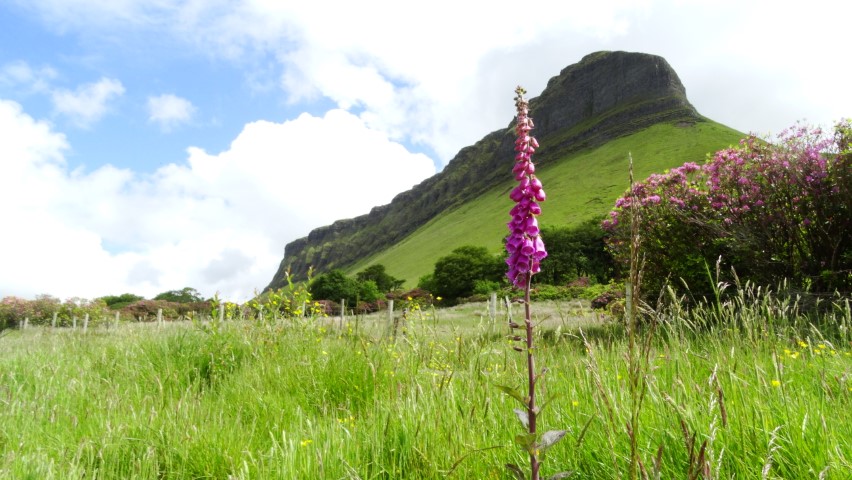 The view back up to Ben Bulbin towards the end of my walk.