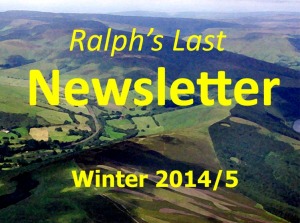 If the schedule for producing a report on membership for the AGM had been put back a fortnight the number of ECR members would have been 624, rather than the 619 I reported. Even so at 619 the total number of members is only ten less than reported at the 2013 AGM. Over a number of years our membership has been declining, and at a much faster rate than this year.

Does our total membership number matter? Our full programme of walks are generally well attended; we have no problems in filling a coach for a day’s walking away from our home area; over the past year our footpath clearance programme has been underway with a group of our members as volunteers working under the dedicated direction of Brian Richardson showing visible improvements to some of the paths in our area; weekends away are booked up and sometimes waiting lists have to be created for social events and meals when they are oversubscribed. This suggests a vibrant, sociable and active core membership exists irrespective of our total membership numbers. Nevertheless membership numbers do count when Ramblers Central office decide how much grant they will allocate to each group. Perhaps, more importantly, if our numbers are haemorraging greatly year on year, this might indicate the group is not functioning well to meet all its members’ needs, even after account has been taken of uncontrollable macro factors, like the economic recession and deferments of retirements, are taken into account to explain this decline.

While not considering our decline in membership had reached a critical point – it had fallen to 614 at its lowest point this year- I contacted the head of membership services at Ramblers Central Office in March to ask if research had been conducted on why Ramblers membership is declining. He confirmed declining membership was not unique to our group, and was in much steeper rates of decline in other areas of the country. More people renewing their subscriptions by direct debit were helping to stem the number of leavers. He told me they were trying to implement a more robust early alert system to other people not using direct debit to remind them when their annual subscriptions are due. Only 12 in our group have subscribed to the ideal; taking out life membership, by calculating their longevity- hopefully- will more than recoup their initial outlay.

Following my request for research I was emailed a 36 page document, with page upon page of histograms , breaking down membership into age groups, gender ,motivations for walking, years of membership etc., accompanied with the apology it had been conducted in May 2011 and now needing updating! Wading through all this, and not wishing to bore fellow committee members at our next meeting with it all, there seemed two salient points. There was a spike in the number of people not renewing membership after 7 years, which did not seem to be explained- perhaps it is the Ramblers equivalent of a seven year itch supposedly occurring in marriages. Even more noticeable, however, was that by far the largest group of people not renewing their subscriptions was after only one year of membership. The overall conclusion- setting aside such specific complaints by new members that the group they were walking with were too old, walked too slowly or too quickly- was that every effort needed to be made to make new members feel welcome when they started walking. Because the new member liked walking did not mean they would automatically enjoy walking with a Ramblers group. Sometimes new members complained they felt as though they were excluded by an established clique of walkers. The message is that as a group we cannot be complaisant about the welcome we are giving to new members, assuming , for example, no effort on our part is required and that they will `pick it all up as they go along`.

There are a number of possible reasons why our membership numbers have only declined by ten this year. It is possible that the group’s excellent website has helped, including accessibility to the walking programme. In order to maintain this attractive and comprehensive programme throughout the year, however, there is a constant need to retain and recruit new walk leaders. Since April this year, organised by Roger Norton, articles accompanied by pictures have regularly appeared in the Macclesfield and Wilmslow Express, which has helped in maintaining our public profile as an enjoyable and worthwhile activity available in our area. Next year I will endeavour to ask all new members how they came to join our group, in order to be more precise whether this is, for example, coming across our website, reading one of our articles in the local paper, or having a friend who had joined, as well as members who have belonged to other groups but have moved to our area.

Finally, Ramblers Central Office has a crucial role to play in maintaining membership numbers. Their efficient administration is important if members are not to feel frustrated and disillusioned. I genuinely believe there has been an improvement overall in the quality and speed with which queries have been dealt with by Central Office over the past year, although there have been some notable, but now infrequent, exceptions to this, and that applications to join appear to be processed more expeditiously than when I joined six years ago. They have instigated a new initiative to help answer frequently asked questions by the memberships, details of which were circulated by email to our members on the 19th November. To repeat, the email addresses to contact them on to answer` frequently asked questions` is http://www.ramblers.org.uk/membershipenquiries . I feel intrigued to know what these frequently asked questions might be.