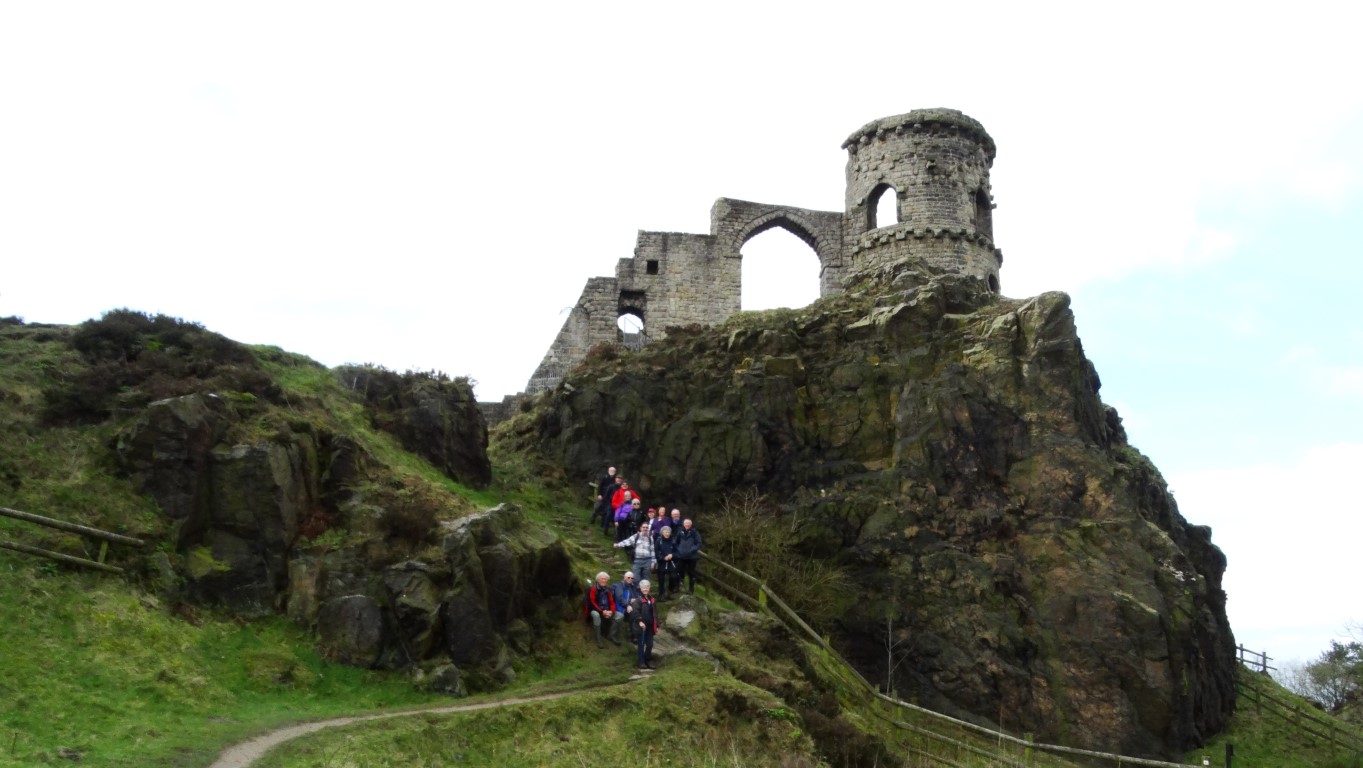 After days of incessant rain fifteen East Cheshire Ramblers met on a rare sunny morning for the start of an eight and half mile walk from Congleton to Mow Cop and back. We set off along the Macclesfield Canal, one of the last narrow canals to be built; indeed, it was very nearly built as a railway! The mud along the tow path tested our stamina and skill in parts before leaving the canal at Ackers Crossing and taking a moderate, steady climb through fields and woodland to the summit of Mow Cop.
We reached Mow Cop, the southernmost outcrop in Cheshire of hard sandstone grit, which rises 335metres above sea level. We passed the ‘Old Man of Mow’, a gritstone pillar over 20 metres high, which was left after the quarry was last used. The Old Man used to be a rock climber’s paradise, but now is deemed too unsafe to climb. From there it was a short walk to Mow Cop ‘Castle’; a mock tower that was built as a summer house in 1754 by Randle Wilbraham, the Squire of Rode Hall. The tower, now owned by the National Trust, is visible for miles around and is a major landmark visited throughout the year. Mow Cop was also the first meeting place for John Wesley, who took the first Primitive Methodist service there in 1807. We were able to take a well-earned lunch break at the top of the ‘Castle’, sitting in the winter sunshine! This allowed us time to take in splendid 360 degree views across the Cheshire and Staffordshire countryside.
After leaving Mow Cop we walked along Congleton Edge, the final section of the Gritstone Trail; formed as a result of earth movements along the Red Rock Fault. Here the much older, often harder rocks of the Peak District and Pennines dip beneath the young sandstones and mudstones of the Cheshire plain. The ridge follows the Gritstone Trail to Nick i’th Hill, a pronounced dip in the ridge, believed to have been caused by a melt water drainage channel in the last ice age. From there we negotiated our way slowly down, through extremely muddy fields and water logged stiles, back to the beginning of our walk.