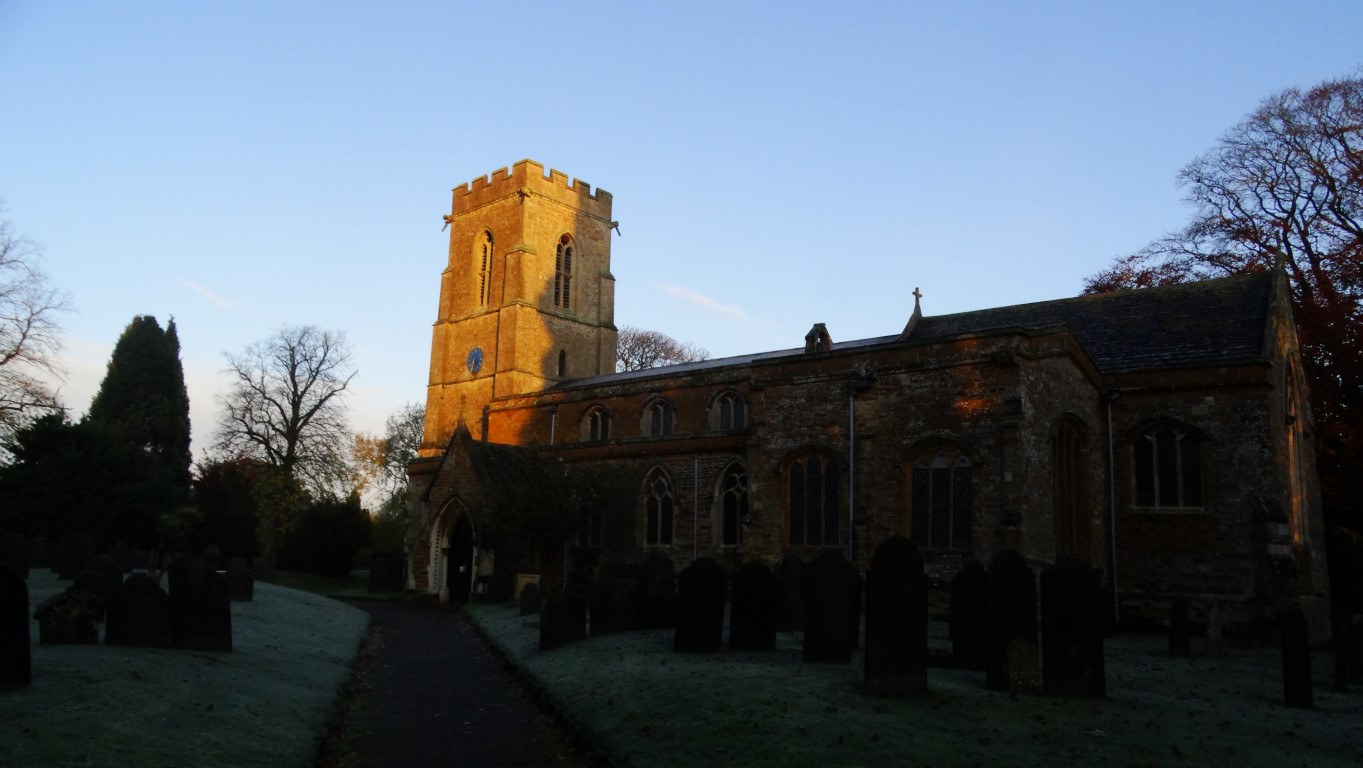 Early morning sunlight on St Mary’s Church at the start of my walk.

On my many visits to Bristol each year, I usually get a walk in on my journey down or on the way back and over the past couple of years I have been nibbling away on walking the Shakespeare’s Avon Way which runs 92 miles from Tewkesbury to Naseby in Northamptonshire. Some of my walks have been linear where public transport is fairly straightforward but there are parts where public transport is near on nonexistent and so the only option has been to do the walk as a circular. The other problem as many of us are all too well aware of at present is flooding. The ‘Shakespeare’s’ Avon is all too prone to bursting its banks over the winter months and this autumn has very much proved the point.

A couple of weeks ago I was planning to walk another section of the Shakespeare’s Avon Way but bad weather was forecast. Having walked the path between Tewkesbury to Warwick, my original plan had been to walk the next section between Warwick and Ryton on Dunsmore and then catch a bus to Coventry then another bus back to Warwick. This would have meant a longer walk and certainly a finish in wet weather. I decided therefore on re-planning the day with an early start and doing a circular walk at the easternmost end of the Shakespeare’s Avon Way. For one thing, this walk was a bit shorter and wouldn’t require catching any buses. Furthermore, given an early start I probably could finish the walk before lunch time and hopefully prior to the rain setting in.

I left home early (5am) under starry skies and drove down to Welford in Northamptonshire but the journey was fraught with foggy patches. Dawn was breaking as I joined the M1 motorway and I reached Welford just at sunrise.
Parking in the village all was very quiet as I donned walking boots and wrapped up in warm clothing. It was minus three centigrade with a heavy frost and with all the recent heavy rain the road surfaces were very slippery. 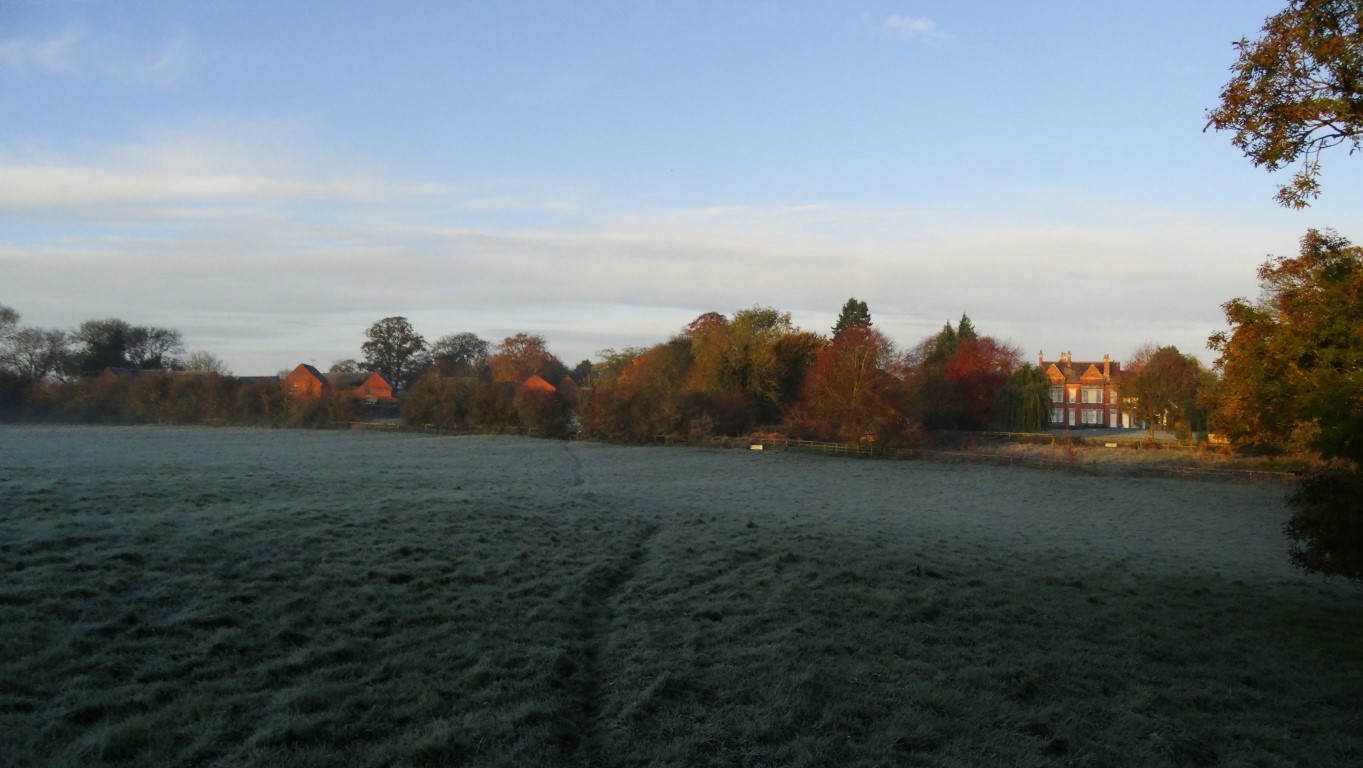 Leaving Welford and following the Shakespeare’s Avon Way across frosty fields. A change in the weather is just apparant on the horizon. 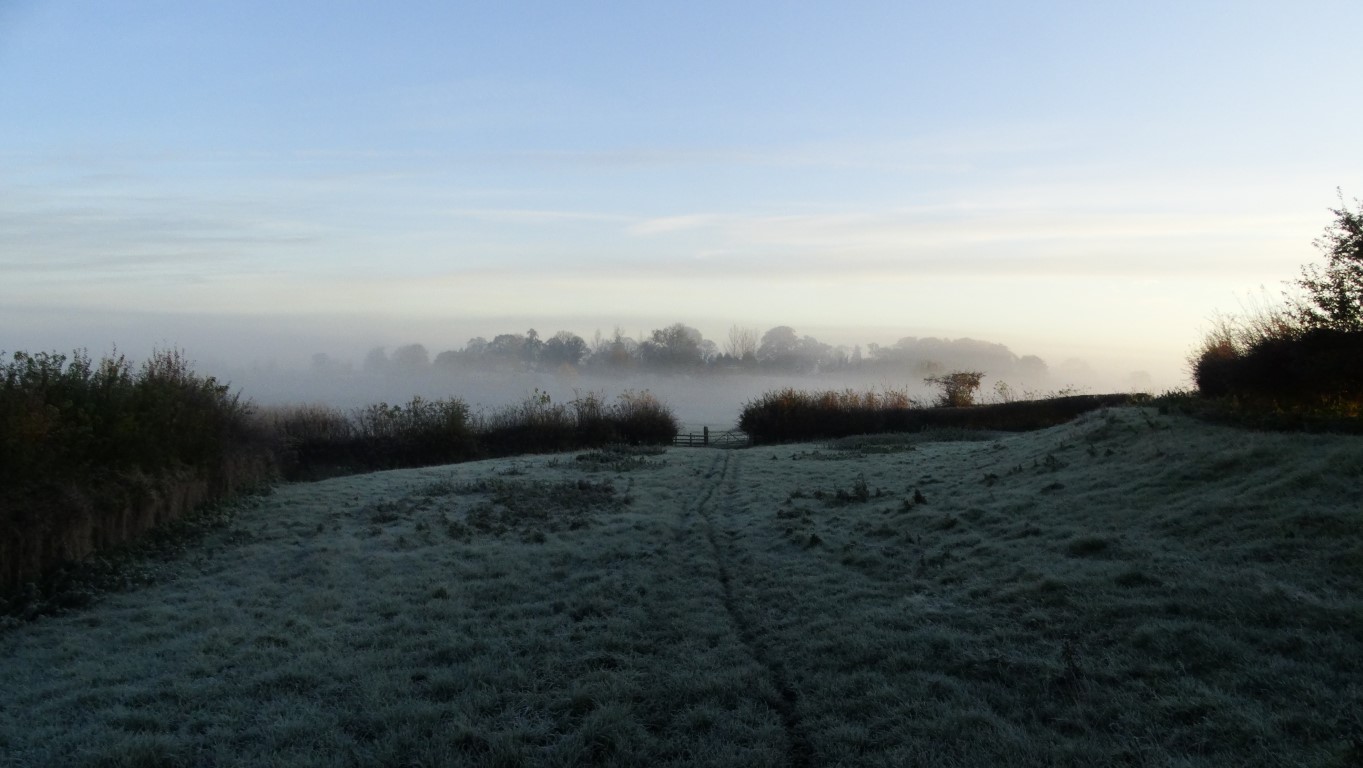 Setting out at 7.30am, the first rays of the morning sunshine was lighting up the warm coloured stonework of St Mary’s Church in the village. I crossed the main road and took a frosty path northeast. My plan first was to follow the Shakespeare’s Avon Way to Naseby and the location of the source of the river and my route initially was along the shallow valley of the infant River Avon. The meadows were a frost hollow and were choked with shallow fog. It was almost magical in the surreal light with the low morning sunlight casting long foggy shadows along the fields. Despite a heavy frost, the ground along the valley was waterlogged in places. I later crossed the River Avon near the former Sulby Abbey. Today a farmhouse lies on the site of the abbey which was founded in 1155 as daughter house of the Abbey of St. Mary and St. Martial in Newsham and in its heyday covered around 1500 acres. It was destroyed during the Dissolution of the Monasteries in 1538. I crossed more fields and gradually ascended to the Naseby Road. I would stay with this road all the way to Naseby, and with the fog being very much present it gave the opportunity for some interesting atmospheric photography. High cloud was edging in from the southwest and I knew that the magic of the early morning would soon be gone. 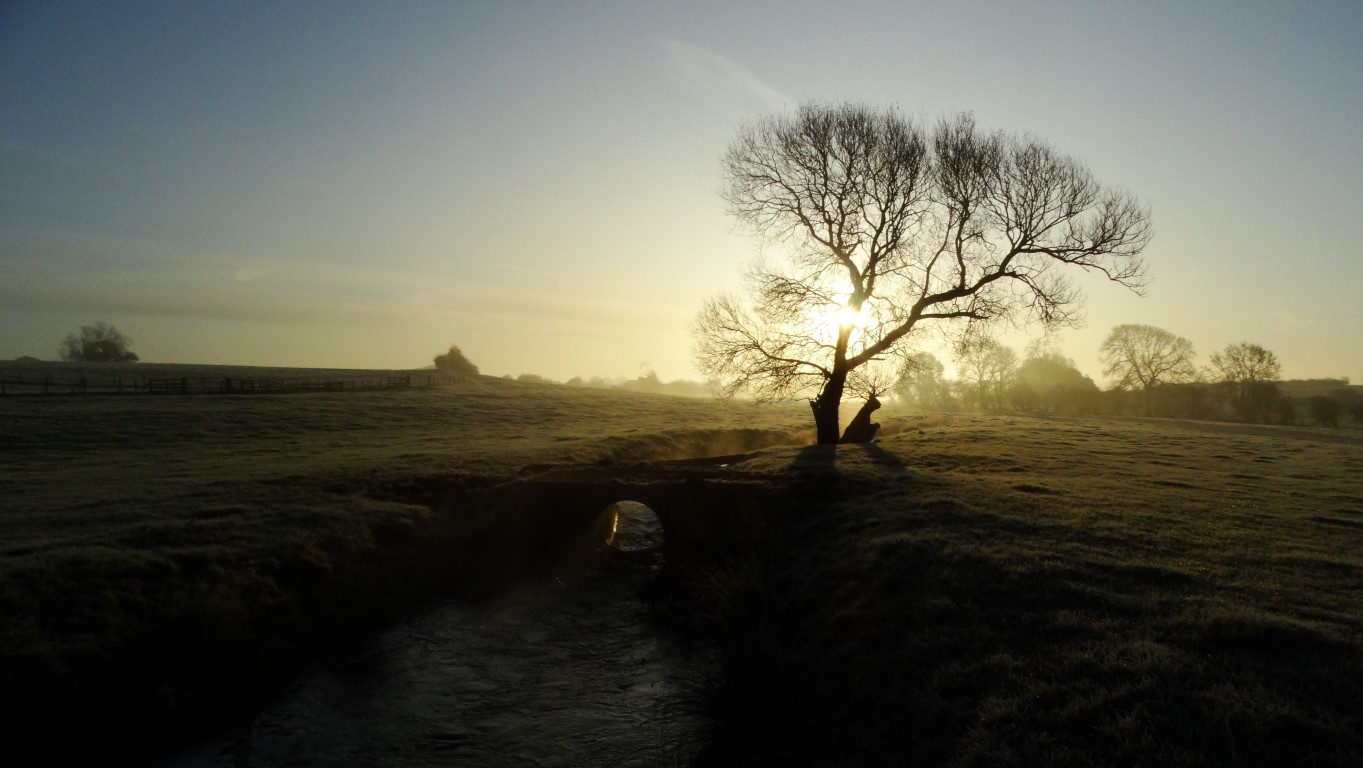 A magical morning with low sunrise across frosty fields along the River Avon valley. 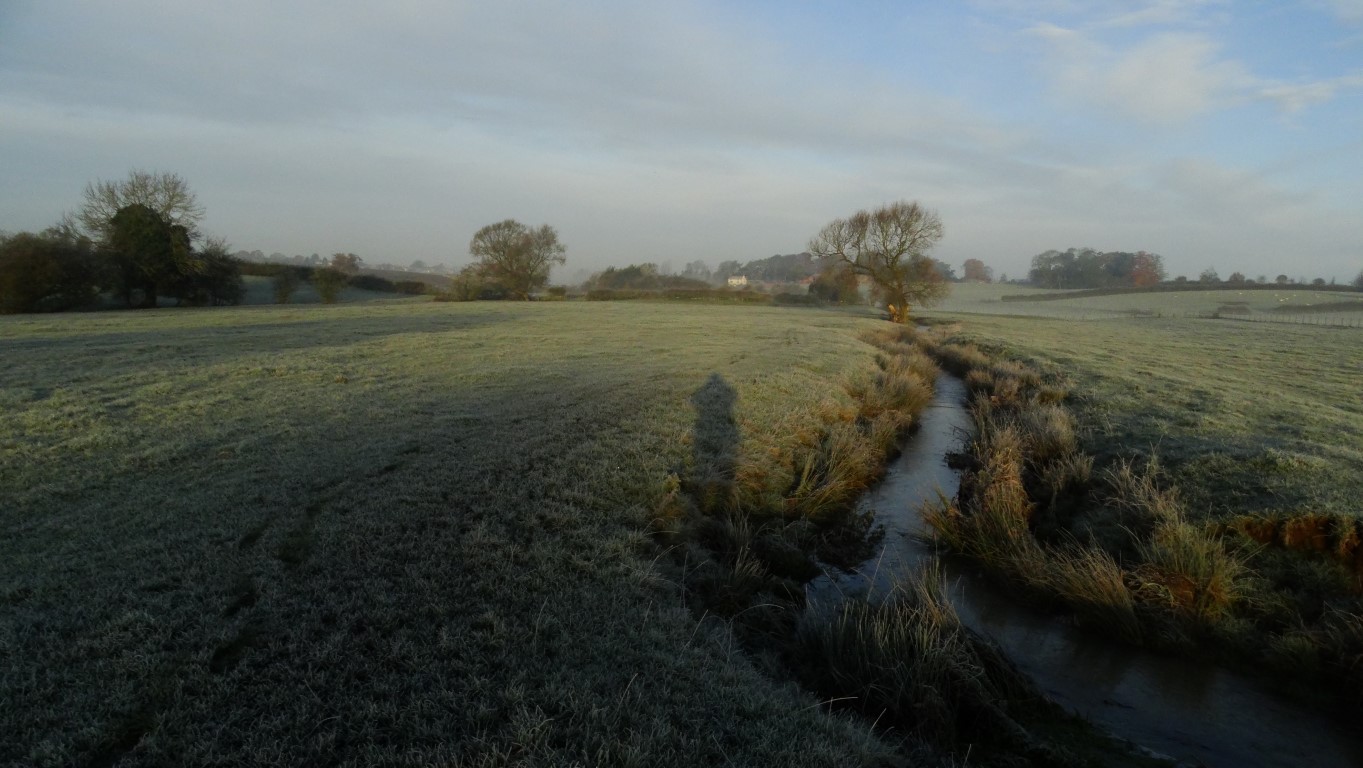 The road had a coating of black ice much of the way to Naseby and I quite often found easier walking along the grassy verges and in any case most passing drivers seemed oblivious to the underlying road conditions as they sped by. It was always safer to leap up onto the verge well before a vehicle reached me. 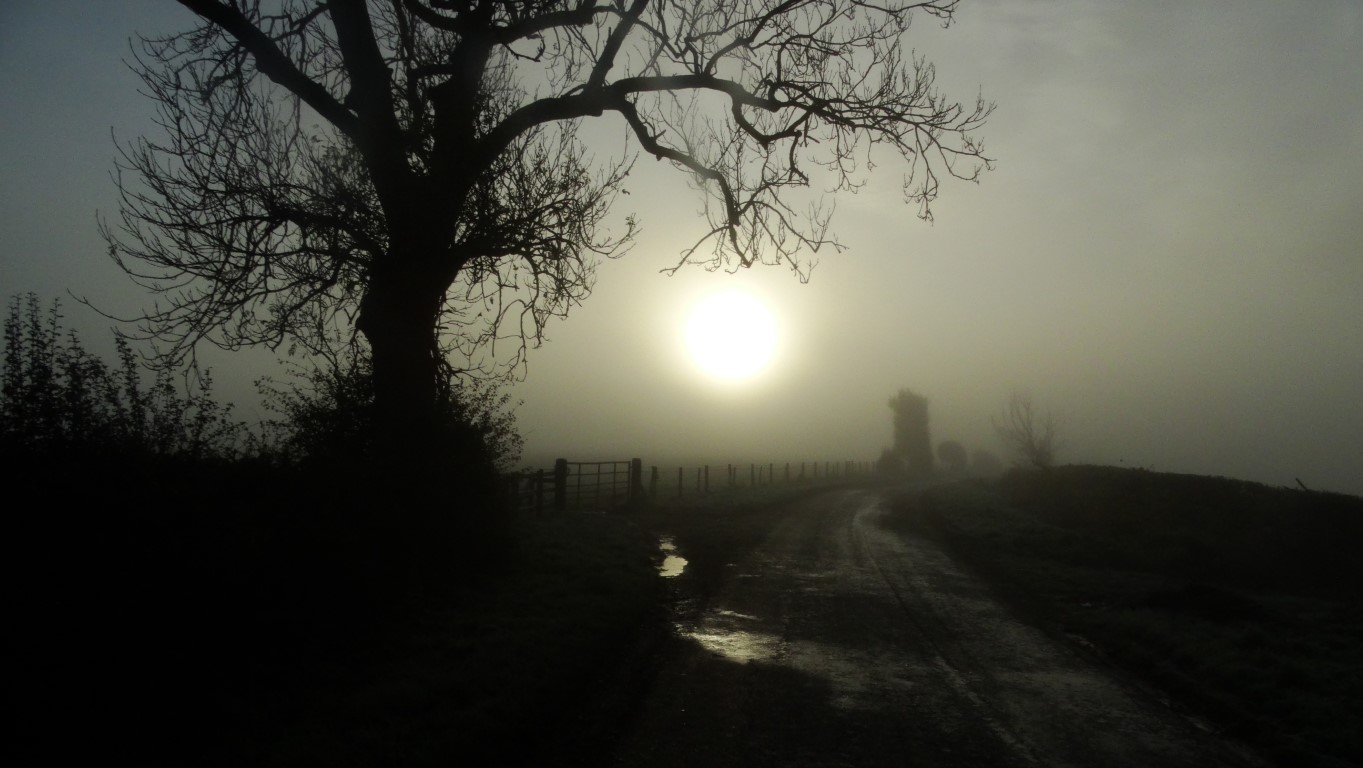 The fog returns as I head towards Naseby but it makes an unusual atmosphere. 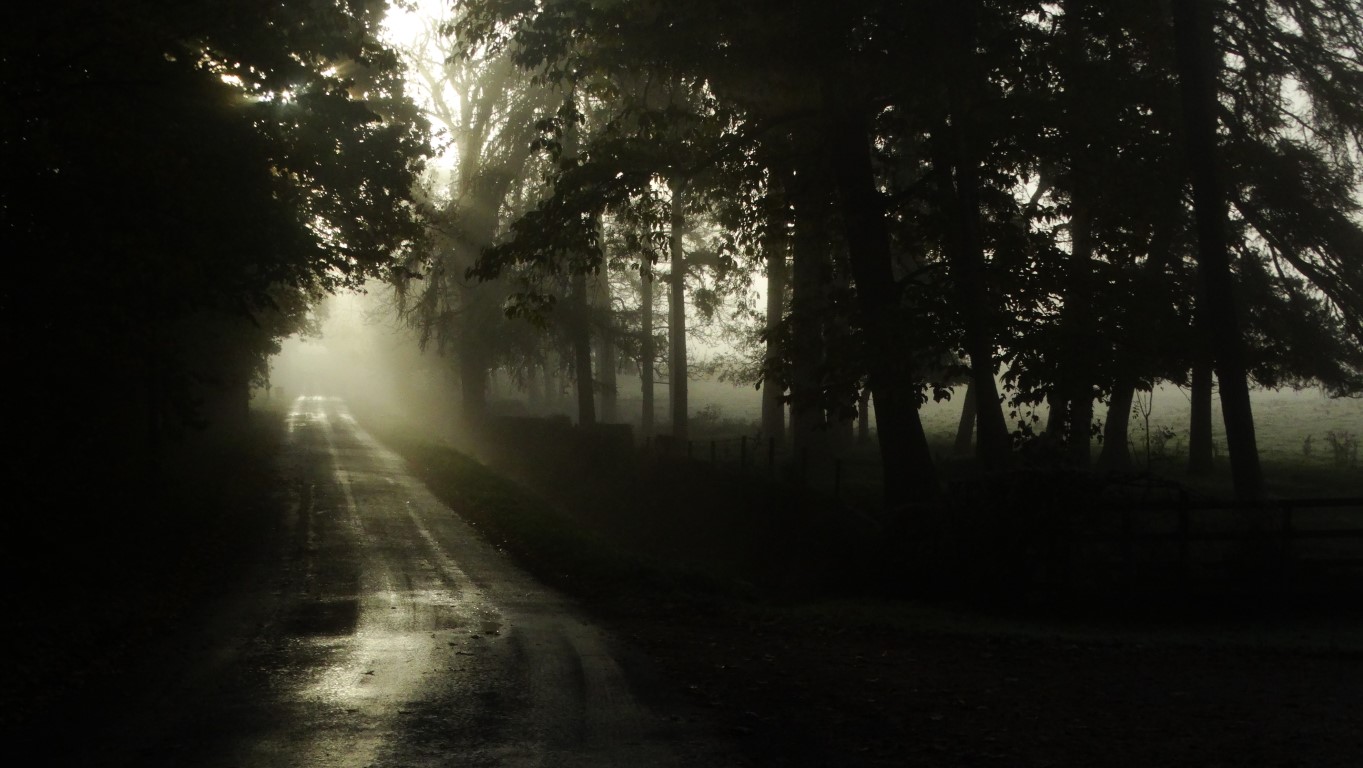 Sunlight through the trees as I near Naseby on this magical start to the day.

The foggy outline of All Saints’ Church Naseby eventually came into view. The church has a fine slender spire which was added much later than the 14th century tower. I explored the churchyard then stopped at a seat surrounding a tree in the centre of the village for a short break. The village hadn’t really come to life but as I tucked into my morning break the silence was broken with the church bell striking 9am. Unknown to me and very close by was a cone shaped monument which marked the source of the River Avon so this will mean another visit to find this one day. Several other rivers have their source in the area including the Nene and the Welland which both flow eastwards into The Wash. 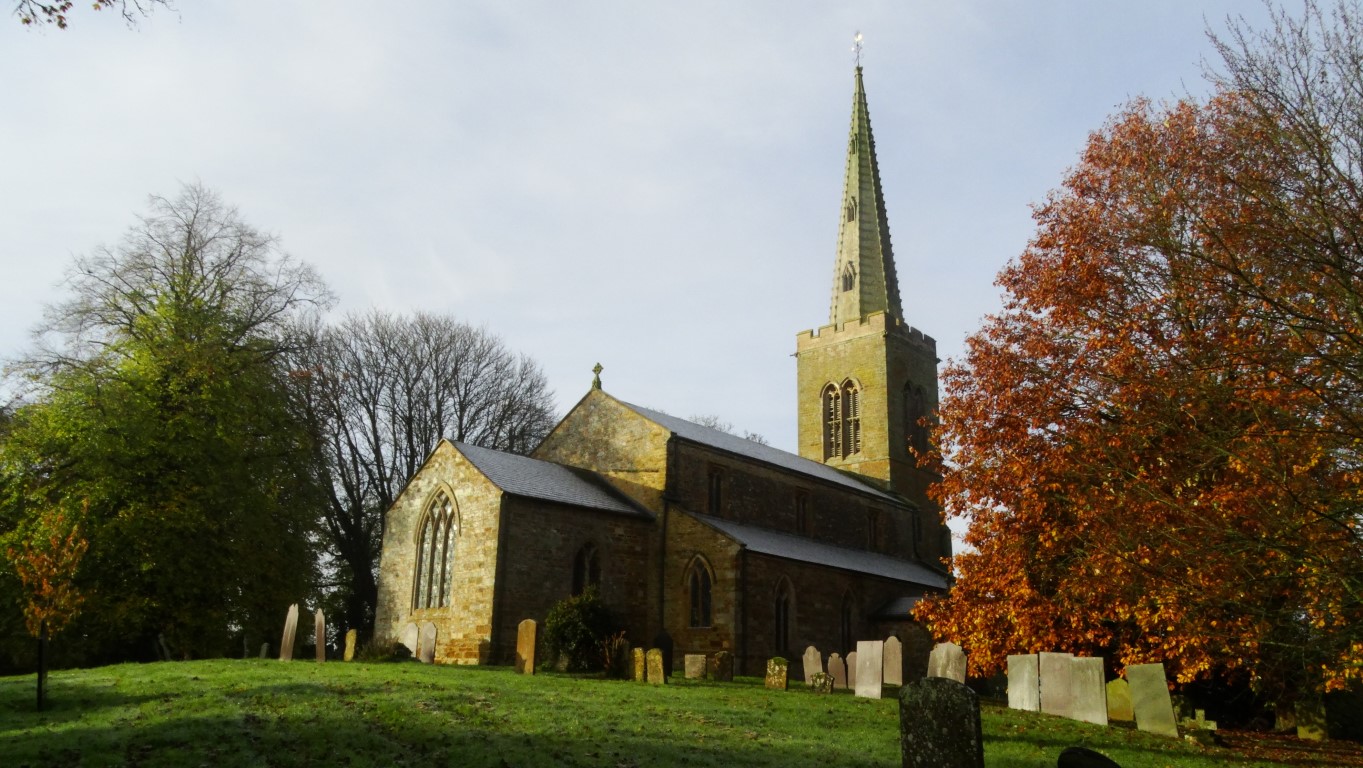 All Saints’ Church in Naseby and time for an early break.

Naseby is far better known for its famous battle during the First English Civil War fought on the 14th June 1645. The Parliamentarians defeated the Royalists in this decisive battle and within a year the Parliamentarians had won the first civil war. Today I wasn’t visiting the battle site and instead headed through the village to take the minor lane to Thornby. Along this road the fog closed in and with the cloud edging in, the sunshine was soon watery. The frost was going quickly and the black ice along this lane was less of an issue.

In Thornby I crossed the main road and took a wander around the foggy churchyard of St Helen’s Church before taking a field path west to join the Cold Ashby Road.
En route to Cold Ashby, the fog suddenly lifted to reveal quite a grey day. In the village I made for the interesting church and took a look inside. The colourful east window was of a modern design and I was impressed by the modern metal seat outside commemorating World War 1. This modern bench seat is one of many such seats that are appearing in various villages up and down the country and made by David Ogilive Engineering of Kilmarnock. 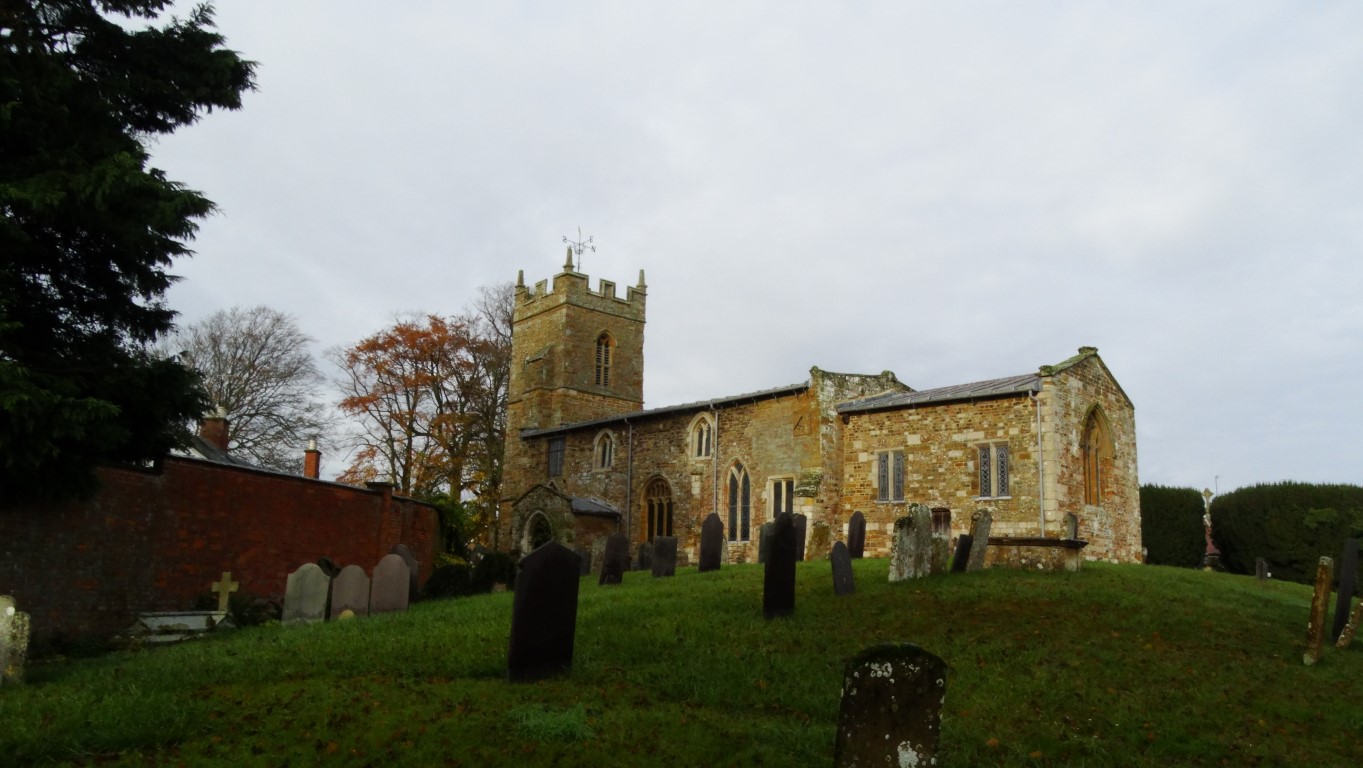 The historic church at Cold Ashby but now the weather is beginning to change. 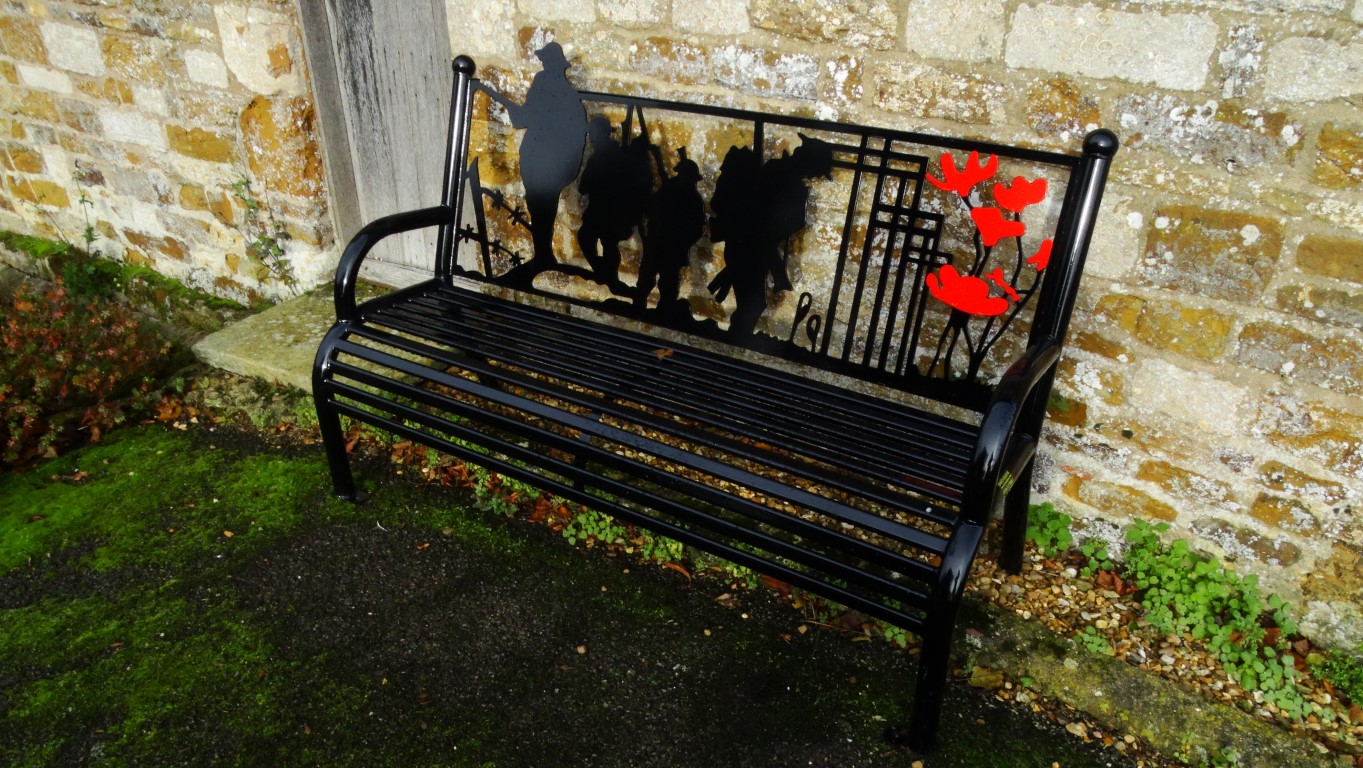 From the village I followed the lane west with views opening out to the south but at the same time rain bearing clouds were evident to the south and west. I did have thoughts of extending my walk but now, with the weather on the change it didn’t seem such a good idea. Just off this road I made a short detour to visit the Cold Ashby Trig Point but this is no ordinary trig point. Some could say it’s the ‘Cathedral of trig points’ as this is where it all started and a plaque on the trig point commemorates that this was the trig point from where the first observations were made for the re-triangulation of Britain on the 18th April 1936. I had been here before and on my previous visit, when the trig point stood in the middle of a field but since then a hedge has been planted so that it is now partially obscured. 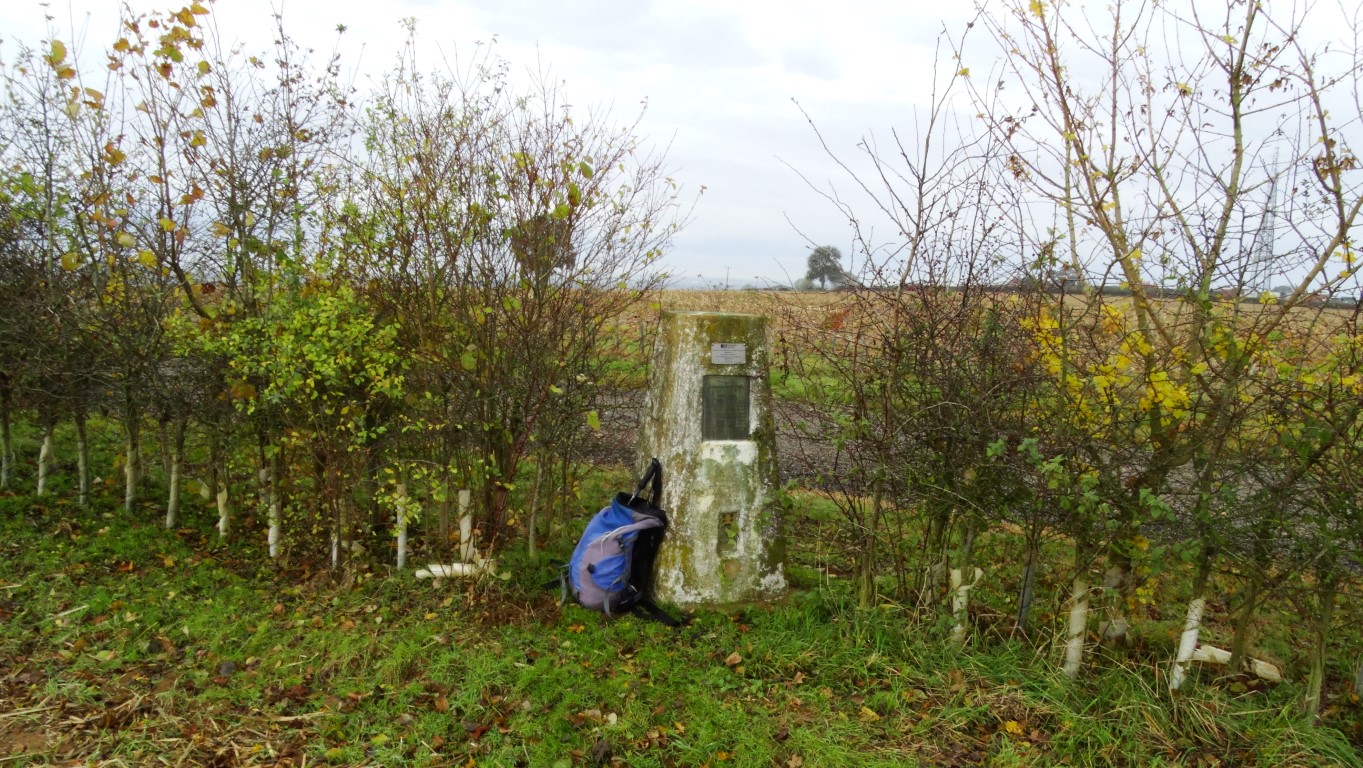 The ‘famous’ Cold Ashby Trig Point where the re-triangualtion of Britain started in 1936.

Returning to the lane I continued over some marginally higher ground and veering north in the process. Descending, I re-crossed the A14 and soon took a bridleway on the right to skirt around towards the Northampton Road. The fields were now quite mucky and I picked up plenty of mud of my boots in the process. Way-marking wasn’t all that wonderful as I crossed fields but I came to the conclusion that at least this path had some footfall. I reached Court Lane and followed this west for a short distance then took an overgrown path north and had to scale a small gate. The path continued across fields to reach Welford and I pressed on into the centre of the village before following a couple of side roads back to the car. By now it had turned a very grey day and the rain that had been forecast didn’t seem that far away.

It had been a magical start to the walk but my journey down to Bristol via the Cotswolds was through torrential rain with some minor flooding.