One of the many highlights of the East Cheshire Ramblers’ programme is their regular weekends away. This year the group went to Coniston for the weekend. It is a fascinating area with old copper mines and slate quarries. The majority stayed at the excellent Waterhead Hotel with beautiful views of the lake and a few others found their own accommodation. Three walks were organised on both Saturday and Sunday of varying lengths and difficulty to cater for everyone’s requirements. Much to everyone’s delight and relief, the weather was absolutely wonderful all weekend.

On the Saturday, 16 intrepid walkers set off to climb the Old Man of Coniston. Rather having an immediate ascent they walked along an old railway line above the Lake before walking gently upwards through fields of pasture and eventually meeting the Walna Scar Road. There are several routes to walk up Coniston Old Man (803m) and they choose a path leading us to Low Water a glacial basin, before completing the final ascent. They enjoyed stunning views, stopping for lunch above Levers Water with distant views of the Fairfield Horseshoe, the coast and estuaries. Taking an easy path along the top they reached Swirl How with more views of the mountain tops of Bowfell and Scarfel, from here they started their descent using a rocky path before reaching Wetherlam and walking down a long grassy slope back to the Miners Bridge and Coniston.

Twelve walkers set off up Walna Scar road, which climbs steeply to a remote car park used by walkers wanting to climb the Old Man, but without the initial slog! They then had a beautifully scenic walk back down to Coniston via Torver Beck, Torver Village (with its bizarre phone box converted into a fish tank) and along the lake. The final 10 caught an early bus to Blawith, and ascended via Beacon Tarn to Blawith Fell (820ft) and then descended and walked the path along the whole length of Coniston. They too had panoramic views and finished their walk following the lakeshore path into Coniston where they stopped for tea at the Bluebird Café by the lake. 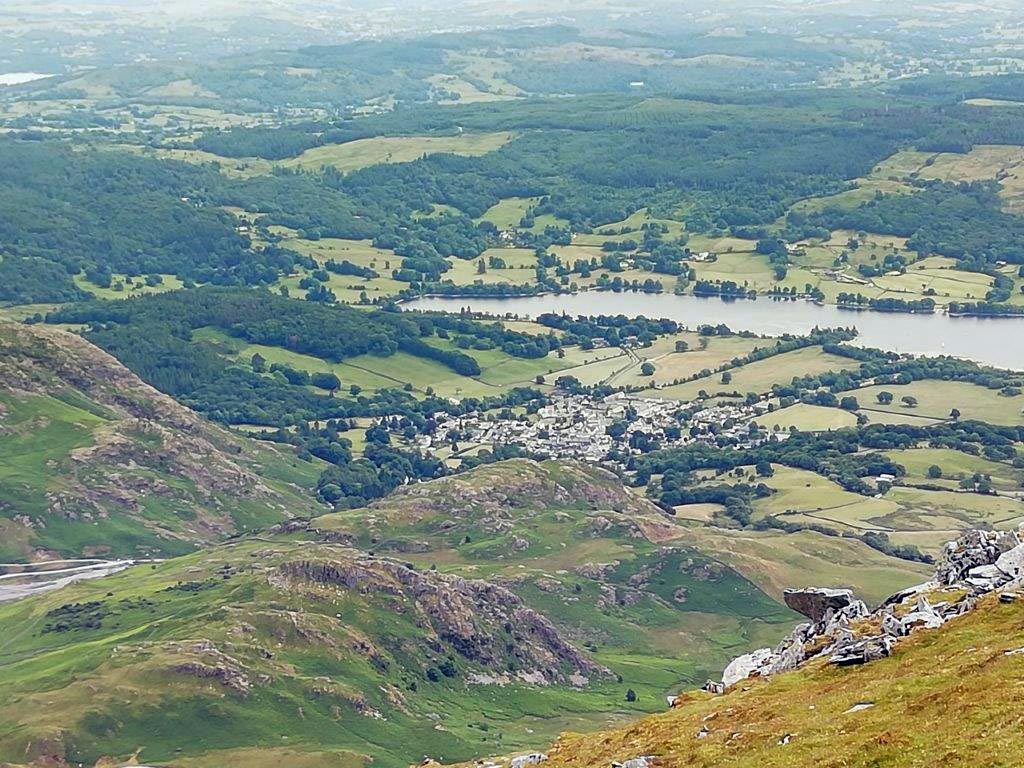 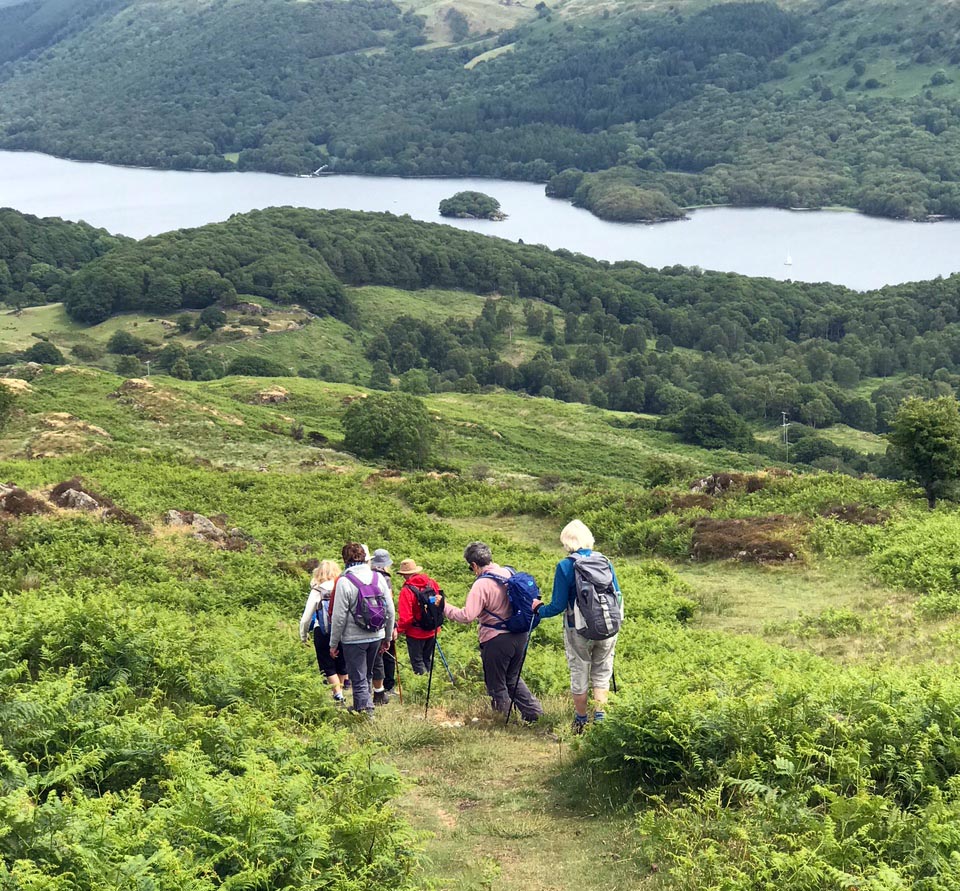 Descending from Blawith Fell on the short walk on Saturday.

As well as being exhilarated by the panoramic views the long walk participants were able to inspect evidence of the area’s industrial past and discover a link with our home town of Macclesfield. In the 18th century there were three areas of copper mining which employed 600 men, women and children. The ore was transported to smelters In St Helens and Swansea by horse and cart and boat and finally rail. In 18th century Charles Roe formed the Macclesfield Copper Company and worked on the rich ‘Bonsor’ vein in Red Dell above Levers Water taking it below 150ft of the previous German workings. Gunpowder was used for blasting and by 1795 the workings were more than 330ft deep. The company also managed other mines at Parys Mountain in Anglesey and Charles Roe built a copper smelter on Macclesfield Common. 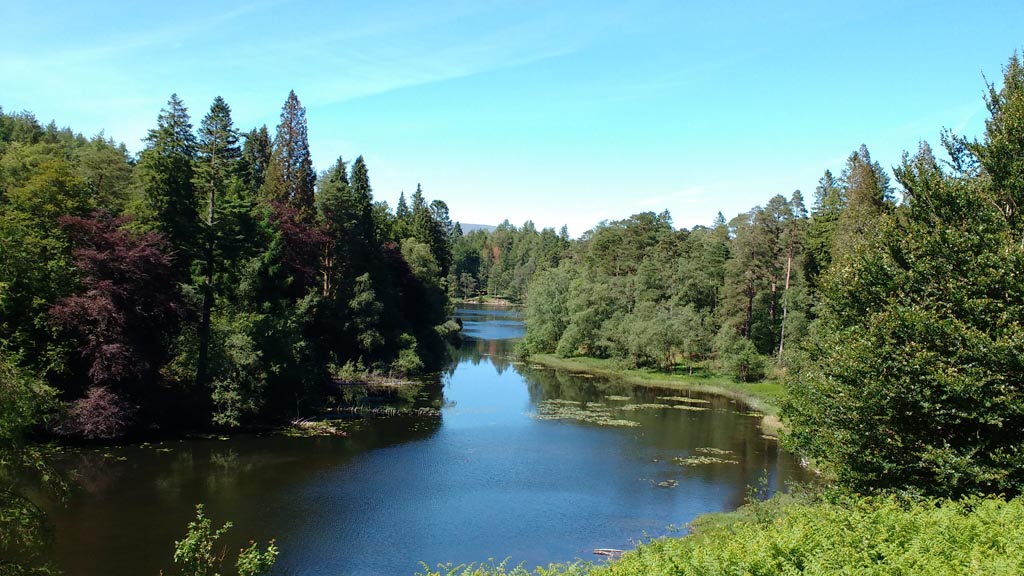 On Sunday, 12 walkers took advantage of the spectacular weather to walk through Coppermines valley and then climb up to Swirl Hawse, Swirl How, Great Carrs and the Wet Side Edge, returning to Coniston via Little Langdale and Higher Tilberthwaite. They covered 13 miles and 2800 ft of ascent. The remaining walkers set off from the main car park at Tarn Hows. Eight walkers did the 8 mile “Fell Sandwich” walk ascending Holme Fell and Black Crag with Tarn Hows sandwiched in-between and 18 walkers did a gentler 6 mile circular walk from Tarn Hows via Low Yewdale Farm, Harry Guards Wood and High Oxen Fell and back to Tarn Hows, where 3 people ascended Tom Heights for the amazing 360o views. Much to everyone’s delight, on returning to the car park, the ice cream van had arrived. Flavour of the day was “Thunder and Lightning”! Couldn’t be further from the weather. What a perfect end to a perfect weekend! 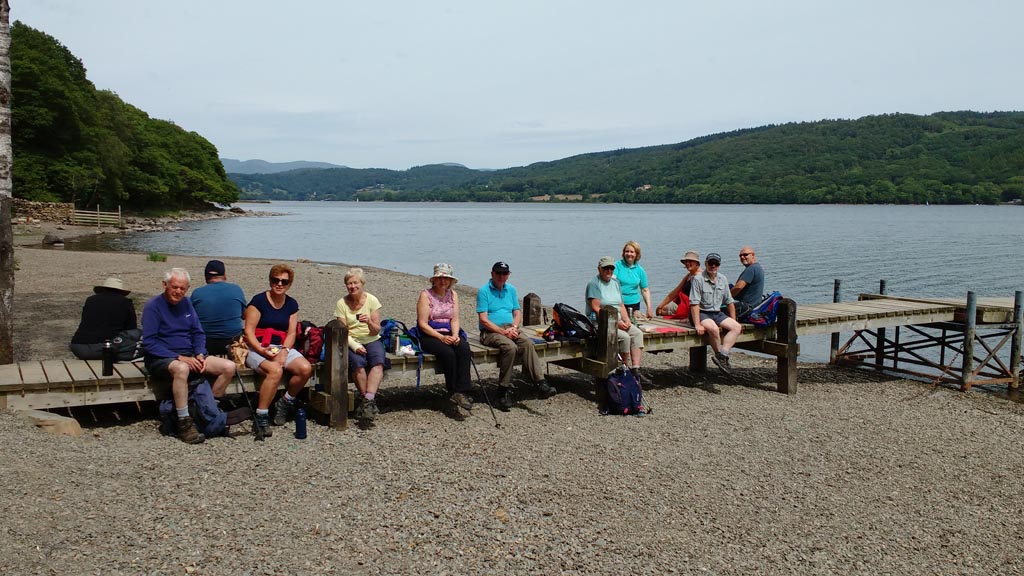 Lunch stop at Torver jetty on the Saturday medium walk