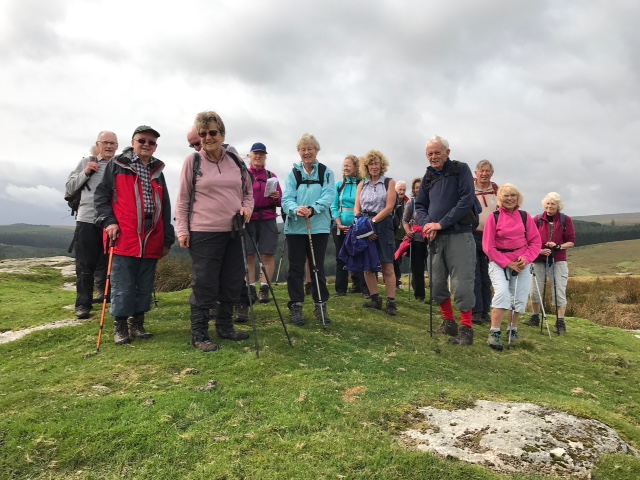 This five day break was very different to the Ramblers’ normal trip away and thus I was concerned as to whether it would work well or be fraught with difficulties. I can say that it worked well and everybody seemed to enjoy it. Can I just say that this was the nicest group I have ever had the pleasure of being involved with.

Six of us went down a day early to reccie our walks and did eventually manage to stay in the Manor House, no mean feat. On the Sunday the weather was atrocious and did not bode well for the rest of the week. John Handley had to buy an extra layer before he even set off!! I have to say there is no way, under normal circumstances, I would have gone out in that weather. We returned with everything soaked and we hadn’t even started the trip. We did have a good evening meal and chat which made it all worthwhile.

We walked on Monday, Tuesday and Thursday with Wednesday off to either visit the area or take part in the wide variety of activities. Golf and tennis were taken up by a number of the group.

Evening activities hey, when I discussed this idea with Frank we decided that nobody would be interested but we booked 10 pin bowling on the first night, just in case. Almost everybody turned up and really enjoyed themselves with Dave Gibson being the winner. The second night Ruth organised a fun table tennis tournament and again it was a great success. Frank being the winner, perhaps due to many years being spent in the youth club. The third night we were tutored in short mat bowling by Chris and Sue Munslow and again had a fun evening. The final evening there were several things on offer, including a 60/70 night which several people took part in. So not your normal ECR trip!!

Frank and I led the Meldon Quarry circuit on the Monday described as “a stunning walk, taking in fantastic moorland fringe scenery with views of the high moors and passing under the striking Meldon Viaduct”.

Monday’s other walk was led by Martin who is a walk leader at the hotel, and we started our walk from ‘The Warren’ pub close to Postbridge .  Martin was a mine of information (pun not intended) as he told us about the history of mining in the area and of medieval and earlier remains.  We looked at areas where miners would stay over the summer and saw where they would have grown vegetables and where they would have had rabbit warrens (hence the name of the pub) to supply meat on site.  The moor was beautiful providing a splendid air of isolation and moody rolling views.

A short walk was also led with by a leader from the centre. The weather was kind to us and everybody seemed to have had a good day when we met for dinner.

Tuesday’s long walk was led by Lyn, another walk leader from the hotel, and we started from Belstone.  We did an 11 mile tour of the Tors (pun intended) including Hounds Tor, connected to the famous Sherlock Holmes mystery ‘Hound of the Baskervilles’.  There was lots of climbing and we had constant rain in the morning, adding up to a tough walk.  However, we did not let it dampen our spirits and really enjoyed the 7 tors we climbed, and the views of Dartmoor when we did finally get them in the afternoon. 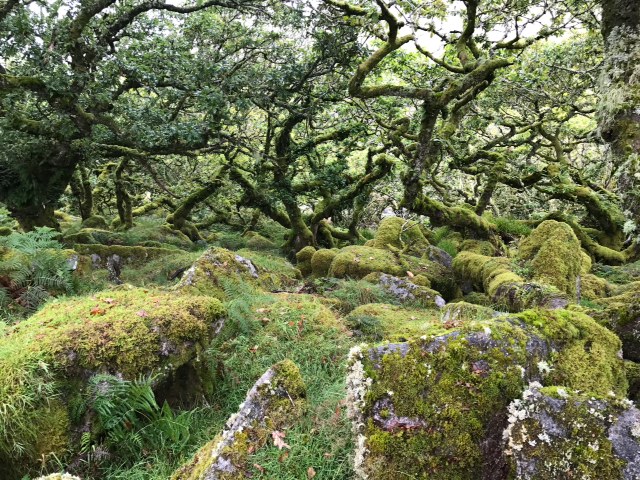 On Tuesday John Handley led a walk to Wistmans wood. What an experience; see his description below. A short walk was also led from the hotel.

This ‘ecological ramble’ began beside a quarry which revealed the granite architecture of Dartmoor. From here we walked along a rough track into the moor. Beside the track gorse had been burnt to provide a flush of mineral nutrients for the sheep. We reflected on a Welsh saying – ‘Bronze under heather, silver under gorse and gold under bracken’.

Next came Crockern Tor, the open-air meeting place of the Stannary Parliament where Devonshire tin mining was adjudicated from the 14th to the 18th century, and where Sir Walter Raleigh himself presided on October 27th, 1600.

From here we followed a ridge, each tor more impressive than the last. Less impressive for the sheep. Up here, where the rainfall exceeds 2,000 mm, the growing season for grass is only 175 days compared to 300 days on Devon’s south coast. 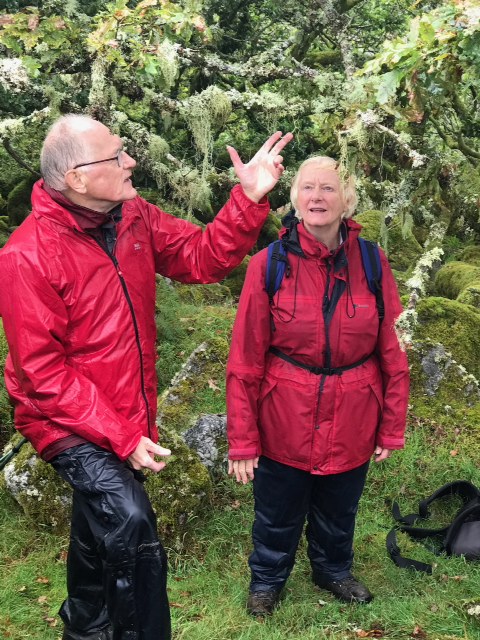 Hence the tree line in western Britain is depressed and Wistman’s Wood at around 400m is one of the highest oak woods in England. It is a vestige of the wildwood that clothed Britain in early prehistoric times. The ancient gnarled oak trees have survived because the granite boulders between which they grow, known as ‘clatter’, are impenetrable to grazing animals – and not much better for ramblers! They are festooned with lichens and ferns and this is a truly atmospheric place.

After lunch we followed the Cowslic River to join the Devonport Leat. This beautifully engineered channel was constructed in the 1790s to carry drinking water to the expanding Plymouth dockyards. The leat brought us to the edge of the West Dart valley from where we looked down on Crockern farm. The landscape was grey and drab except for a bright green field beside the farm where animals had been regularly folded. We then looked at the grass beneath our feet and saw that it too was a healthy green and full of herbs. We were standing in a medieval enclosure where the ecological memory went back at least 500 years. Dartmoor may be a forbidding place but its landscape history is something to behold.

On Thursday 7th September the walk started in the village of Gidleigh. The focal point of the village is the Holy Trinity Church which dates from the late 15th century and nearby are the remains of Gidleigh Castle which is a much earlier building.

From the village the route took us southwards through the densely forested area of Gidleigh Tor to cross the cascading Teign River. The path joined the Two Moors Way leading us through flowering pasture meadows of the lower slopes of Dartmoor.

At French Beer we left the path walking up on the moorlands and shortly reached the remains of Bronze Age hut circles.

Crossing the valley we climbed the slopes up to Thornworthy Tor. Dartmoor is covered with numerous Tors which are the remains of the granite plugs from volcanic activity nearly 30 million years ago. This high point gave us views of the moors and low lying land all round with Thornworthy Reservoir below.

Lunch was at another Tor, Kestor Rock. We sheltered from the prevailing wind surrounded by unconcerned Dartmoor ponies and their foals.

We headed again for distant slopes towards the ‘Long Stone’, three metres tall with initials carved into one face having a more modern use as a boundary stone. 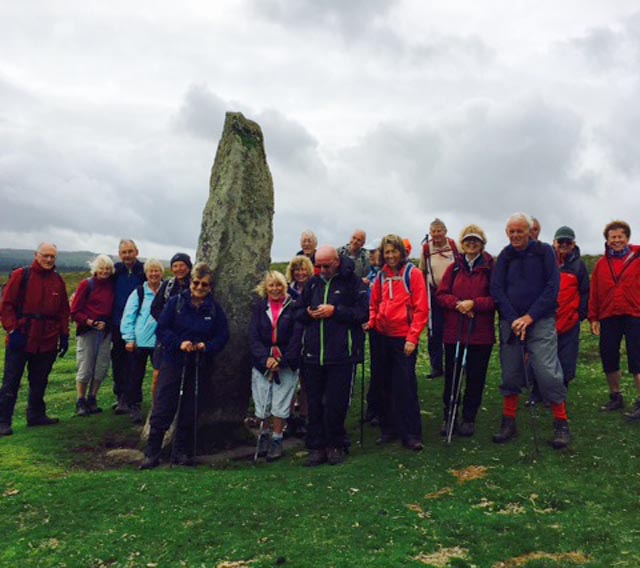 We were now on Shovel Down which has an impressive range of remains dating from the Bronze Age including field systems, stone rows, stone huts, a cairn and the standing stone.

We hadn’t seen stone rows before so they were of special interest to us, being made up of stones which run about a metre apart roughly in a north south direction for a length of up to 180 metres including a Y shape where two rows meet. These may have had a ceremonial purpose. 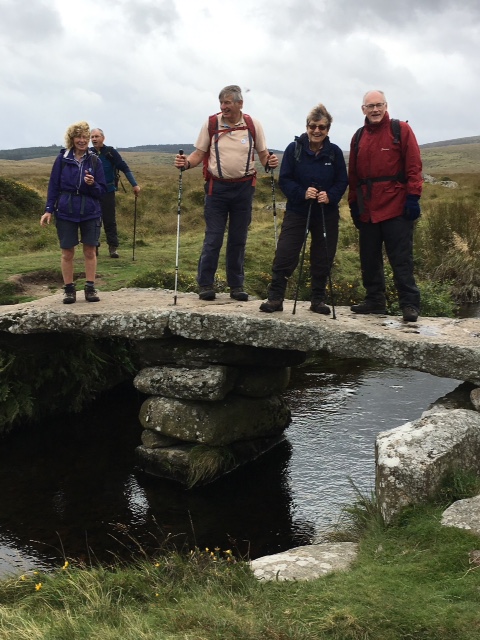 We continued to walk along the stone rows towards an ancient Clapper Bridge then climbing to a higher point where we came across the impressive Scorhill Circle, before returning to Gidleigh.

Diana Beech, in writing about the activities available, said: 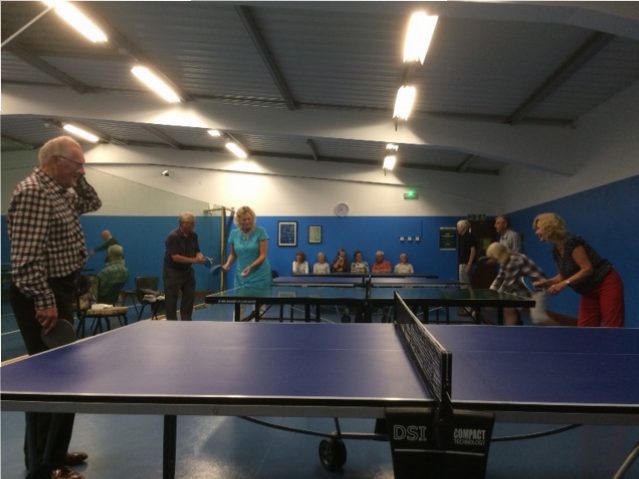 Table tennis and bowling brought out the competitive side of many ramblers, creating much amusement for all. The swimming pools and hydro spa provided welcome relaxation after the walks.

Two members of the group didn’t walk but took part in crafts during the day. They sampled enamelling, patchwork and creative embroidery and really enjoyed them, paying about £3 each session for materials used. Pauline tried jewellery making and now is the proud owner of a necklace.

This just leaves me to thank Sue and Chris Munslow and John Handley for leading walks as well as Martin and Lynn from the centre. Frank for his support throughout the planning stage and during the week. Also thanks to Louise for the amazing cream tea. Most of all thanks to all who attended for making it such a pleasurable experience.